Since commissioning, the James Webb Space Telescope has shown very promising performance, providing breathtaking images and data about the cosmos. This is the beginning of an astronomical adventure that promises to be exceptional. This week, James-Webb gives us an incredible view of the Cartwheel galaxy.

According to Eza, this galaxy, located 500 million light-years away, “was once shrouded in dust and mystery. The telescope has broken through this veil to reveal new information about its stars, their composition and their future.

The cart is a ring galaxy, the shape of which NASA compares to the ripples that form when a rock is thrown into a pond. It was born from a cosmic collision between a spiral galaxy (such as our Milky Way) and another smaller galaxy. “Webb’s observations indicate that Cartwheel is in a very transitional state,” NASA said. “A galaxy that was probably a regular spiral galaxy like the Milky Way prior to the collision will continue to transform.” 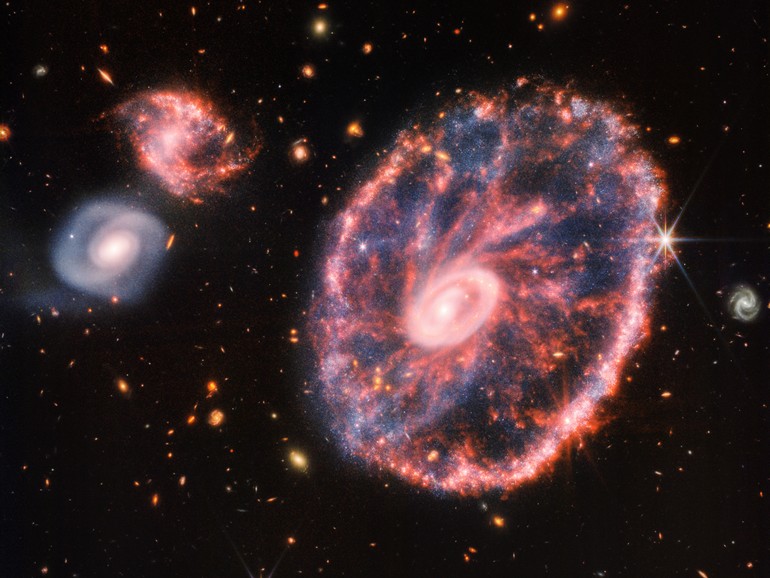 This galaxy is also a breeding ground for stars. “The bright core contains huge amounts of hot dust, and the brightest regions contain giant clusters of young stars,” the US space agency continues. “On the other hand, the outer ring, which has been expanding for about 440 million years, is dominated by star formation and supernovae. »

The Chandra and Hubble telescopes have themselves observed the Cartwheel galaxy, but James-Webb’s ability to see in infrared allows him to cut through thick dust that can obscure other telescopes’ view.

Through this piercing vision, astronomers get information about the age of the stars in the galaxy, as well as details about the dust that makes up the “spokes” of the wheel. James-Webb noticed silicate dust widespread on Earth there. This unprecedented sighting of the Cartwheel Galaxy promises many more exciting discoveries.