Typhoon Nanmadol tore through Japan’s west coast on Monday, bringing strong winds and heavy rain as authorities continued to warn millions of people to evacuate due to the risk of flooding and landslides.

A powerful typhoon weakened after making landfall near the city of Kagoshima, south of the large island of Kyushu, on Sunday evening, but uprooted trees, smashed windows and filled rivers that threaten to overflow.

State broadcaster NHK said one person died and 50 were injured as the storm passed through Kyushu, but authorities did not immediately confirm the death toll.

Prime Minister Fumio Kishida, who was scheduled to travel to the United Nations General Assembly in New York on Monday, will postpone his trip for a day to check on the extent of the damage caused by the storm, his office confirmed.

Officials from the Japan Meteorological Agency (JMA) have warned of high river levels in Miyazaki Prefecture, where some areas received more rain in 24 hours than usual for all of September.

A man looks at a notice on the door of a temporarily closed convenience store in Fukuoka, Kyushu, September 19, 2022. (JIJI Press/AFP-STR) #

“We ask you to be vigilant regarding (risk of) floods and landslides,” government official Yoshiyuki Toyoguchi told reporters.

However, given the intensity of the typhoon hitting the coast with gusts reaching 234 km/h, damage so far appears to be relatively limited.

A crisis management official in the city of Saito, Miyazaki Prefecture, told AFP that “electricity has been cut in some places” and that residents have reported “upside down trees.” He added that the floods “affected some areas as well.”

The JMA issued a “special alert” for Kagoshima and Miyazaki prefectures, which was reduced on Monday morning, but evacuation notices remained in place for 9.6 million people.

In Japan, evacuation notices are advisory, not mandatory, and it is sometimes difficult for authorities to convince residents to go to shelters before extreme weather conditions.

However, on the island of Kyushu, thousands of people spent the night in shelters, while others settled in more solid buildings. 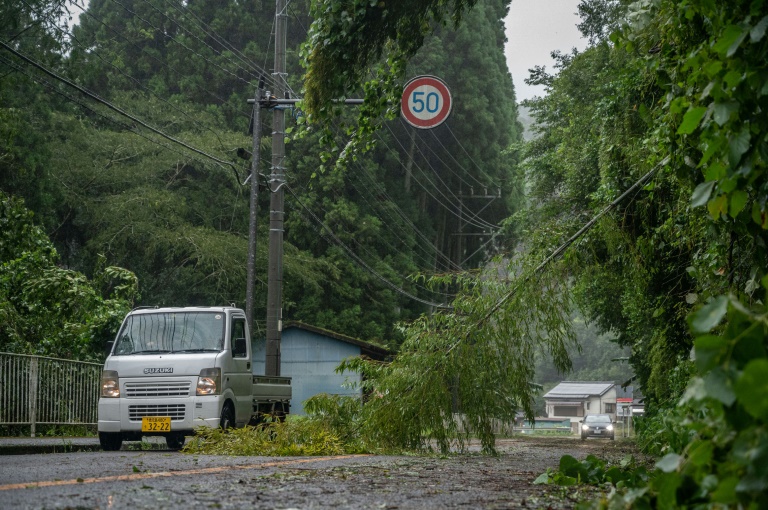 A car drives along a road partially blocked by a fallen tree after Typhoon Nanmadol in Izumi, Kagoshima Prefecture on September 19, 2022 (AFP – Yuichi YAMAZAKI)

In the city of Izumi (Kagoshima Prefecture), 30-year-old Yasuta Yamaguchi took refuge in a hotel. “I came to the shelter because it was windy and I thought it was dangerous,” he told AFP. “I didn’t feel safe at home.”

Nearly 313,000 homes in the Kyushu and Chugoku regions were without power as of Monday morning as the storm slowly made its way down Japan’s west coast, according to public utilities.

Hundreds of flights were canceled and train services were also disrupted in the affected areas during the typhoon, NHK said.

It “continues to weaken” and “has been downgraded from a strong and wide typhoon to a wide typhoon,” Ryuta Kurora, head of forecasts at the JMA, told reporters. 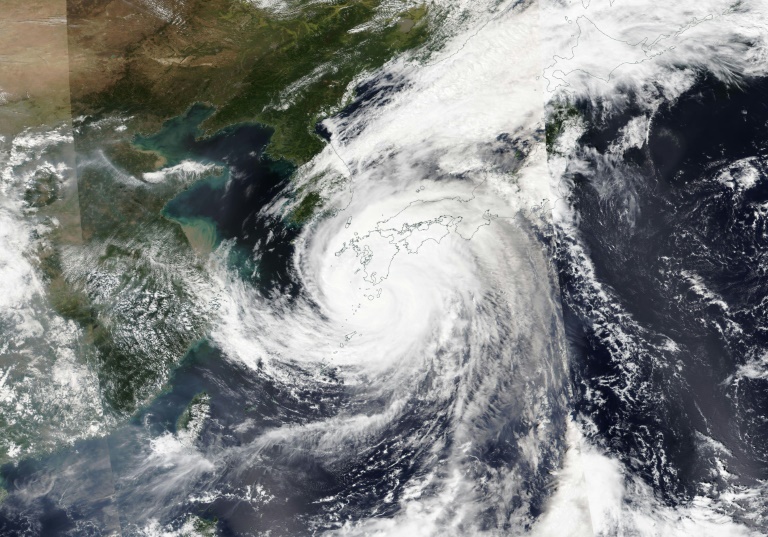 The typhoon season peaks from August to September in Japan, where it is marked by heavy rains that can cause flash floods and deadly landslides.

In 2019, Typhoon Hagibis hit Japan at the height of the Rugby World Cup, killing over a hundred people.

And in 2018, floods and landslides killed more than 200 people in western Japan during the rainy season.

Scientists estimate that climate change is increasing the intensity of storms and extreme weather events.