Accompanied by increasingly intense music, a pack of wolves descends the snowy slopes. He swoops down on a herd of yaks in the valley, surrounds them, and, in choreography perfected from the start, wreaks havoc among the towering herbivores. The point of view of the camera, perched at a distant height, transforms the animals into black and light figurines, facing each other in a mad chessboard swept away by the attack. The chosen prey suffers the fangs of wolves. Then the prairie floor is waved by the wind, the gray and ocher hues of the surrounding peaks blend with the blue of the sky, and the screen gradually fills with immense swirling wisps of red dust. . ..

In the footsteps of a mythical feline, the snow leopard

Calm regained, two men appear behind the sensual curve of a hill, laden with heavy backpacks, one of them carrying a long photographic tripod. Sylvain Tesson, an adventurous writer, and Vincent Munier, a famous wildlife photographer, are the protagonists of an expedition documented by the latter in duet with director Marie Amiguet. The highlands of Tibet form the spectacular backdrop of their fur on the wake of a mythical feline, whose title of the film is named: the snow leopard.

Obsessive search than that of the panther for Vincent Munier: gone many times before alone in his search, he had collected many videos and photos about the living environment of the animal, several times immortalized by his lens. And buried hope for the other members of a multi-week test team, at altitudes above 4,000 meters for temperatures as low as -25 ° C.

“Patience is the most elegant virtue”

However, it is not correct to affirm that the loquacious writer and the silent photographer, of whom Marie Amiguet fixes with spontaneity, delicacy and a touch of humor the relationship, exchanges and reciprocal revelations, are the exclusive protagonists of this adventure. . Animals, the entire wild world, burst onto the screen with their beauty and the simple mystery of their existence. They are not the backdrop to the shoot, but the actors in a stimulating story and the subjects of a discovery whose wonder is renewed with each observation. This, yes, constitutes a crucial object of the film: the viewpoint. The immobile waiting that precedes the much fantasized revelation of the animal. From the meticulous monitoring of a ledge to settle in and leave the photographic equipment, for Vincent Munier, and the moments when he will finally adjust the binoculars to his eyes and accept the uncertainty of a vision, for Sylvain Tesson, Marie Amiguet draws. the ingredients of a human encounter.

“Patience is the most elegant virtue,” comments the writer in voice-over. He follows the photographer as his shadow, towards whom he feels a warm admiration, tinged with existential questions. How to appropriate the way of life of a man who blends so harmoniously with the desert? What is our place among other living beings? What resources can you draw on during the freezing hours spent on surveillance? Camera focused on his face hollowed out in puzzlement, Sylvain Tesson, struggling in warm socks and learning to follow tracks, sometimes falls into a kind of endearing mockery of himself, aware of his efforts to adapt to an exceptional adventure that requires ” everything from even a sacred inner life … “, he snapped! 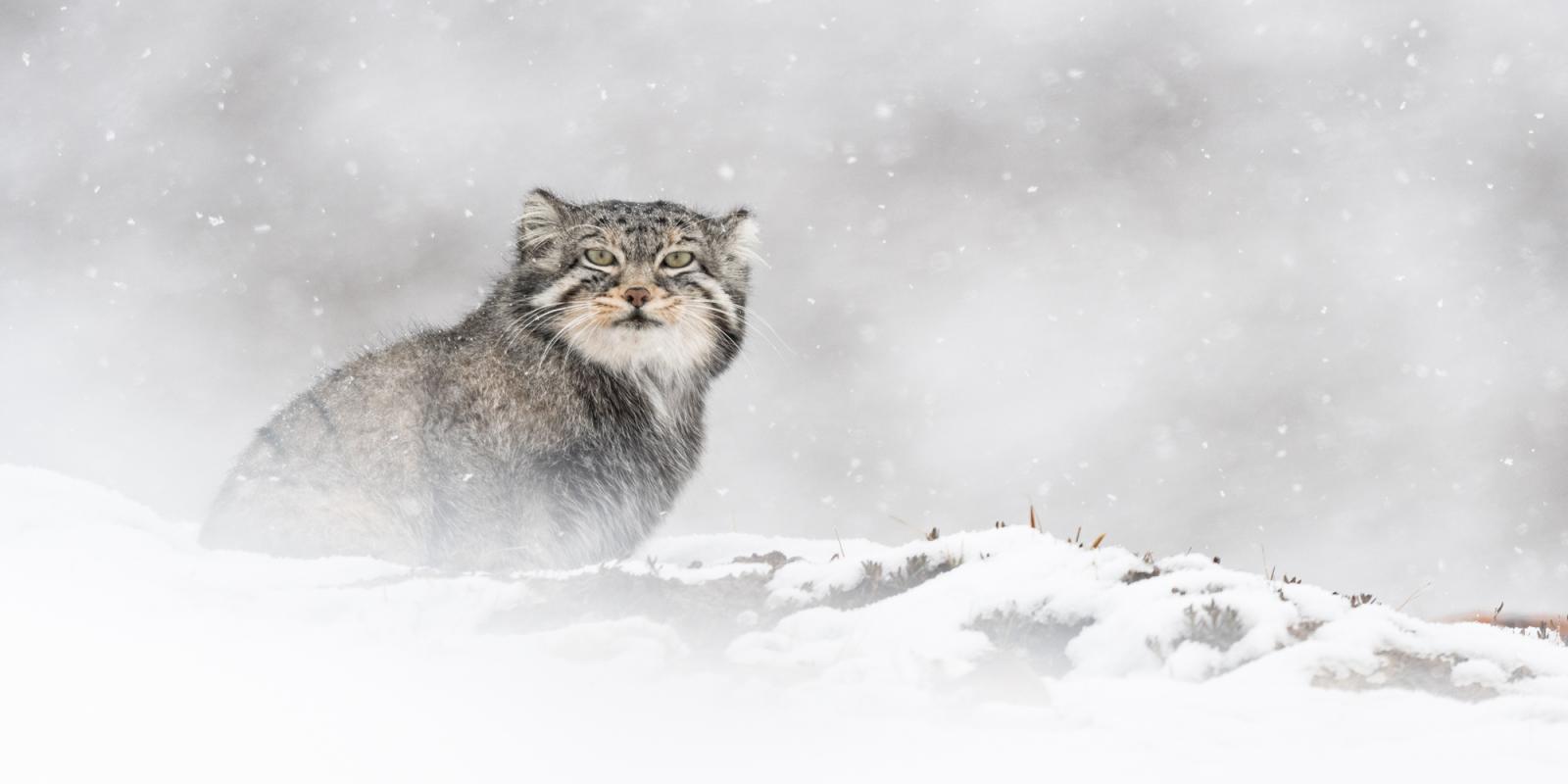 The snow leopard, an endangered species
It is the most discreet feline in the world. Elusive, Panthera uncia, called panther or snow leopard, evolves over an immense territory of more than 1,800,000 km2 from China to Mongolia, Nepal and Pakistan. Preferably it chooses high altitudes, between 2,500 and 5,000 meters where its fur makes it almost invisible, which makes it extremely difficult to observe. Its useful life is approximately 20 years. Their jumps to catch their prey (mainly small mammals) can reach 10 meters. With its population declining by 20% in recent years due to poaching for its fur, and its organs entering the Chinese Pharmacopoeia, the snow leopard is now considered an endangered species, classified on the list. Red of the IUCN (International Union for Conservation of Nature). There are only between 4,000 and 6,000 people left in the 12 countries they inhabit.
Carole chatelain

Vincent Munier is accused of hiding the bruises of the world, of showing only his beauty … Assume. The photographer entrusts to this powerful lever the task of shaking numb hearts, of awakening impulses. But most of all, in doing so, in perfect harmony with his co-director, he reveals to viewers a resplendent and graceful compendium of wildlife. The greatness of this film imbued with respect for animals is to instill in us little by little the awareness of receiving an incredible gift: that of sharing their intimacy and the space they inhabit, that of admiring the purity of their being. The parades and carefree races of Tibet antelopes, shot against the light, display silhouettes drawn by a light brush. Pallas’s cat, who advances cautiously in the snow in search of a rodent whose whiskers are trembling, is followed by the camera that rests in turn on his eyes narrowed in concentration, in the sky where raptors hover requesting the banquet., Then on the men scanning the scene with binoculars. Ah! The joyous precision of such a fun montage! We would forget about bears, an unexpected and overwhelming symbol of a world from which we know we are painfully separated. And then … the panther. 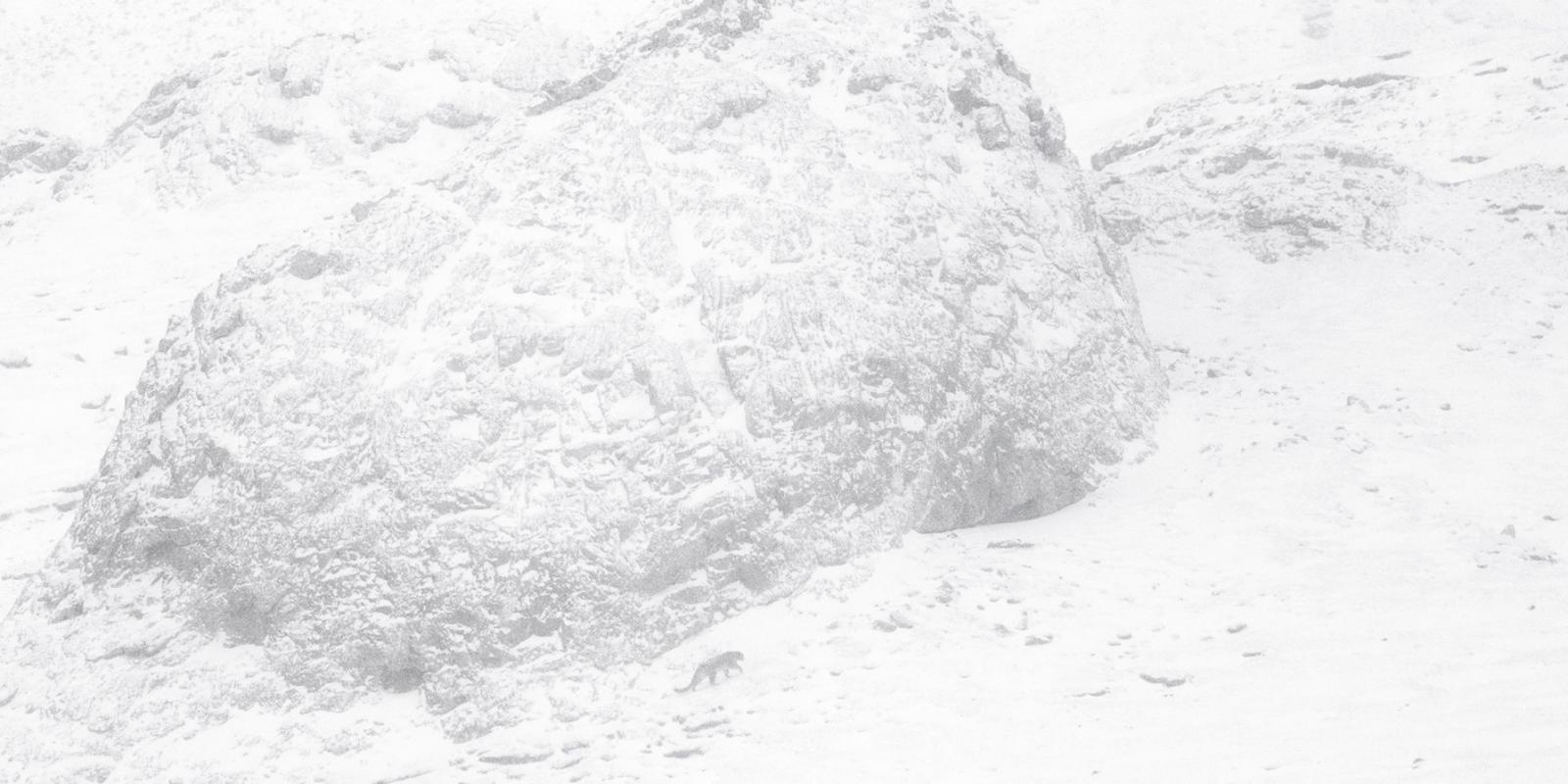 “Panther … panther … panther,” whisper the two men united almost religiously by a kind of transcendence, touching here and there on the floor of a cave the first traces of the sighted feline. What I wish! Will she show herself? It first prints ghostly images of its passage onto the sensors of an infrared camera trap. Then, its thick tail, its flexible profile, appears above the broken lines of a ridge, enigmatic and still secret. The team is now looking for the ideal place to set up an observation camp. Patience.

Tension and patience also for the viewer, shook and heightened with emotion throughout the film the magnificent original soundtrack composed by Warren Ellis in collaboration with Nick Cave. The End Credits, a heady track whose lyrics come from Sylvain Tesson, is titled “We are not alone.” We are not alone. Repeated like a mantra, these words carry the revelation lived by the writer during this adventure: “I traveled a lot and they observed me. They observed me and I ignored him. We are not alone (good news for life) … They are invisible” in our eyes (good news for life)… ”. Now, wonderfully, he will come face to face with the snow leopard. No, we will not say the end. Yes, would you like to meet her too? So don’t hesitate for a second, go see this dazzling movie.