Manufacturers of computers, and of technical products in general, know that when designing a product, it is not enough to be satisfied with technical specifications. In addition to looking closely at the latter, many consumers also need a laptop PC to “catch the eye” to differentiate themselves from other competitors and trigger the purchase.

It is perhaps following this reasoning that Lenovo designed the Yoga Slim 9i, a 14-inch laptop PC that highlights its neat design even when the cover is closed since it is covered with genuine leather. An astonishing choice that intrigued us enough to encourage curiosity to test the device to see what it has on and under the hood.

When unpacking, the presence of leather is not shocking, the integration is even rather discreet and its presence could go unnoticed if you do not hold the device in hand or do not look closely. It comes with a USB-C charger and a USB-C to USB-A, HDMI and VGA adapter.

A case, dressed in leather and fabric, accompanies the device to preserve the fragile cover during transport. A specific maintenance guide for the leather cover is also provided, it does not like liquids, the sun or rough or sharp objects. 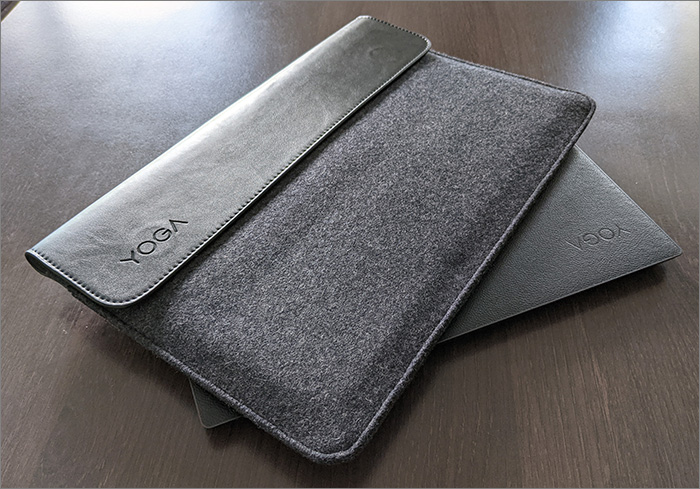 The finishes are in any case carried out impeccably, nothing protrudes from the edges and the texture is pleasant to the touch. 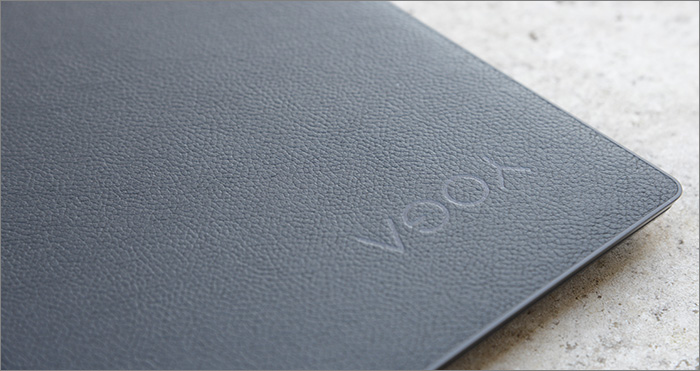 On the left two Thunderbolt 4 ports are used for power or to connect any peripheral, there is also a headphone or microphone socket in mini-jack format. 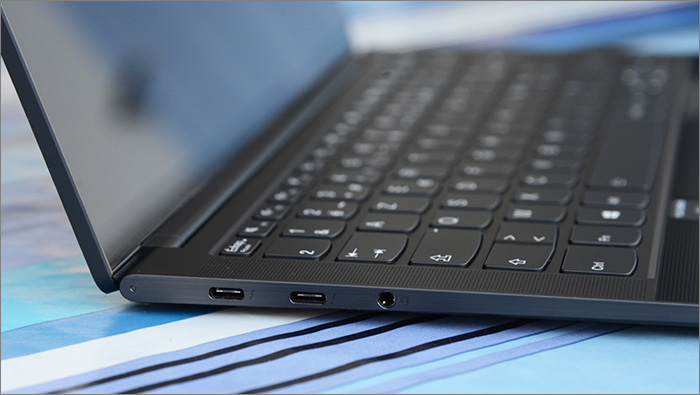 Another Thundebolt 4 port is present on the other side, just after the power button and its discreet LED. Lenovo has integrated a button that allows the camera to be locked so that it can be activated only when needed, a reassuring security measure that allows you not to worry about a possible hack. 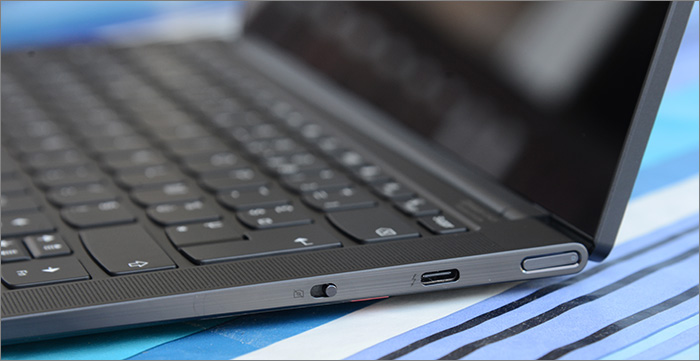 The camera is also used to unlock the Windows 10 session using Windows Hello. A solution preferred here by Lenovo to a fingerprint and which we appreciate. Facial recognition is done very quickly and in all light conditions thanks to the infrared capabilities of the webcam.

Under the device there is simply a ventilation grid which will allow the air needed to cool the components to circulate. 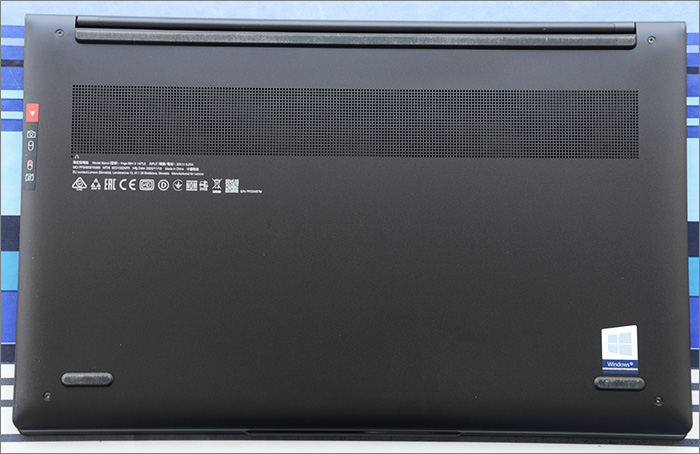 On the keyboard therefore no power button or fingerprint reader, which made it possible to free up space for the speakers placed on either side. These are powerful enough and deliver decent sound for a laptop PC, even when it is sitting on your lap. The keyboard keys do not suffer from this presence and are well spaced.

On the other hand, from the first text entries when starting up the PC, the lack of depth of the keys causes a strange sensation as when a key is hampered by a foreign body. And we automatically look up to check that our strike has been taken into account. This choice was probably made to reduce the thickness of the machine, indeed very thin, but this impacts the comfort according to our feelings. 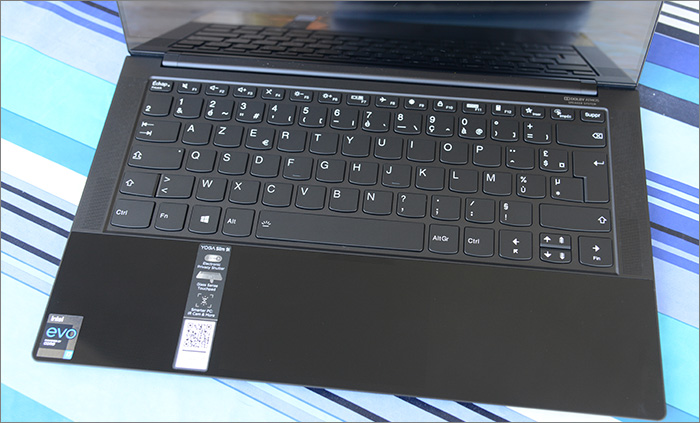 On the previous photo we can’t see the trackpad. And in reality, it is unfortunately a bit the same. If the visual rendering of this glass assembly is the most beautiful effect, it is a little unsettling for the user who cannot clearly distinguish the limits of the trackpad unless a reflection highlights the contours. In addition, it does not have a physical click and a firm press triggers a haptic feedback that simulates pressure. Here again, as for the keys, this requires time to adapt. 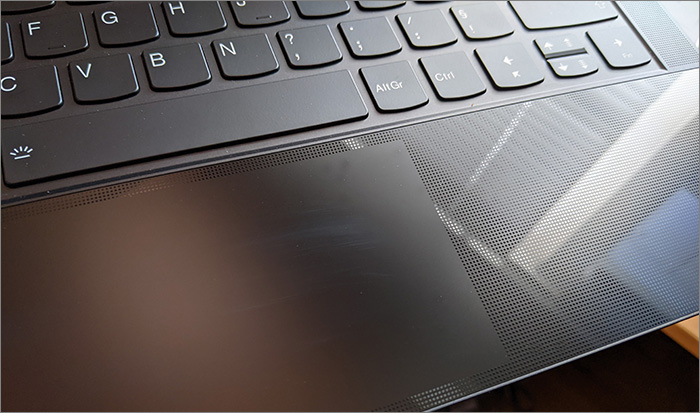 The hood has the ability to tilt flat at 180 degrees, the whole is quite successful in terms of design. The 14-inch touchscreen in 16: 9 format with a 4K display, supported in a frame with fine bezels, will showcase the movies. The coating is glossy and prone to glare, this is offset by sufficient brightness of 500 nits in most situations. 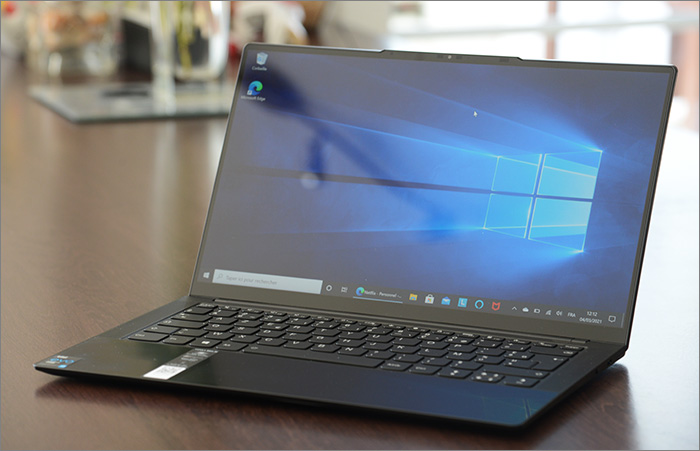 On the software side and after following the Windows 10 Home installation wizard, we discover that Lenovo has integrated additional software: the Alexa assistant, the McAfee antivirus which deactivates the sufficient Windows Defender and its own support software Lenovo Vantage. The latter makes it possible to manage the system, the equipment and the security in a welcoming interface. Too bad it refers to the Lenovo site for the recovery of the drivers rather than offering it directly in the interface.

At the configuration level Lenovo offers a solid foundation and can display the logo of Intel Evo certification. All models currently on the market include Intel Core i7-1165g7 processors (or a Core i5-1135G7 on the Lenovo site) accompanied by the in-house Intel Iris Xe graphics solution. If the storage varies from 512 GB to 2 TB, Lenovo on the other hand only offers an option for RAM with 16 GB regardless of the model.

It does rather well in the benchmarks even if it was necessary to go twice after a first result a little less good, perhaps because of the antivirus which regularly displays annoying incentives to pay the Licence. A simple uninstall allows the less intrusive Windows 10 antivirus to regain control.

A restart later we get Novabench scores of 2259 points while Geekbench shows 1523 in single-core, 5083 in multicore and 17,950 points on the graphics side. Figures in line with what can be found in the competition on equivalent configurations and which guarantees good user comfort even with resource-intensive software. On the other hand, it should be noted that the ventilation is far from being the most discreet that we have encountered. It will not bother you to watch a movie, but will make its presence heard as soon as software puts a little strain on the processor.

By virtue of its format and its contained weight of just under 1.3 kg, the Yoga Slim 9i is compatible with nomadic use. It remained to check the autonomy with our usual method which consists of leaving the device connected to Wifi running on the Netflix site to watch a series in streaming. The brightness fixed at 50% and the sound at 40% this model held 10:30. A good result but it does a little worse than the competition on equivalent configurations, probably due to the 4K display.

If this point is crucial for you, you will find an interesting alternative with the Asus Zenbook UX425EA which displays identical performance but lasted 13 hours under the same conditions, especially it appears at a price half the price. Another less expensive alternative with fairly close results, the 10th generation Intel Huawei Matebook 14.

It is indeed at the price level that is one of the biggest handicap of Yoga Slim 9i. With prices starting above the 2000 euros mark, it puts the cursor a little higher compared to similar models which do not necessarily have such a neat look (though), and do not have this small defect in terms of the stroke of the keyboard and trackpad keys.

Still, honest performance does not have to be ashamed of these models. It is also on its design, its neat finishes and its 4K screen that the Yoga Slim i9 will especially try to seduce you. It is therefore a good solution if paying the price is not a problem for you and this mixture of leather, glass and aluminum is eye-catching.