What if the next step for industrial robots is to evolve towards drones? Never Say Never… In version 2.0, the Dragon robot (an acronym for “Embedded Dual Rotor Multi-Rotor Robot with the Ability to Transform in the Air with Multiple Degrees of Freedom”) looks amazing from every angle. Consisting of four pairs of gimbal fans (eight rotors), the 7.6-kilogram machine, developed by researchers at the JSK lab at the University of Tokyo, is able to stretch to resemble the fabulous animal from which it takes its name.

First introduced in 2018, it could already squeeze through small holes. Since then it has developed a lot. Fully autonomous and able to choose the right shape depending on the circumstances (square, length, circle, etc.), the Dragon can now hover. He can not only push objects, but also move them by clamping them with two ends. However, within reason: it lifts a 0.32 kg cardboard cube and a 1 kg cylinder without problems, but its payload is currently limited to 3.4 kg.

More impressively, the machine can now open and close valves found on real pipes, as seen in the video above. A feature that can be especially practical, especially in the case of fumes that are toxic to humans. However, there is one drawback: the maximum flight time is still limited to three minutes. Few, too few to be used outside the lab… At least not yet. 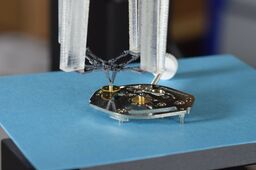