In the console war, Nintendo stood apart for several years and focused on an underdeveloped sector – portable consoles.

Despite the importance given to mobile gaming, few manufacturers have really taken on the nomadic gaming sector, which is dominated by Nintendo and dominated by smartphones (which we systematically carry around with us).

After Steam released the Steam Deck and recently announced a successor, it’s Logitech’s turn to come up with a console that could be described as “Switch Lite” in partnership with Tencent.

Little information is available at the moment, but images shared on Twitter by well-known insider Evan Blass allow us to make our first guesses as to the direction Logitech is taking. Note that the photos have been removed from his account at the time of this article’s publication.

The console will offer two joysticks on either side of the screen, a directional d-pad, a Logitech button on the left, a home button on the right, and X, Y, A, B buttons arranged like an Xbox controller. We also note the presence of the “+” and “-” buttons, like the Switch.

Has the console turned into a cloud?

On the main screen, there is a carousel with various famous logos. The presence of Google Play assumes that the machine will run on Android, which will allow you to take advantage of part of the catalog of mobile games available.

The presence of the Xbox, Nvidia and Steam logos suggests that the console is also designed to work with cloud gaming services such as Xbox Cloud Gaming, Nvidia GeForce NOW and Steam Remote Play.

The home screen also displays the Bluetooth logo (in addition to the WiFi logo), indicating that the device is compatible with wireless headphones.

Of course, all his information should be taken conditionally, as it is taken from images posted on the web for a short period of time. 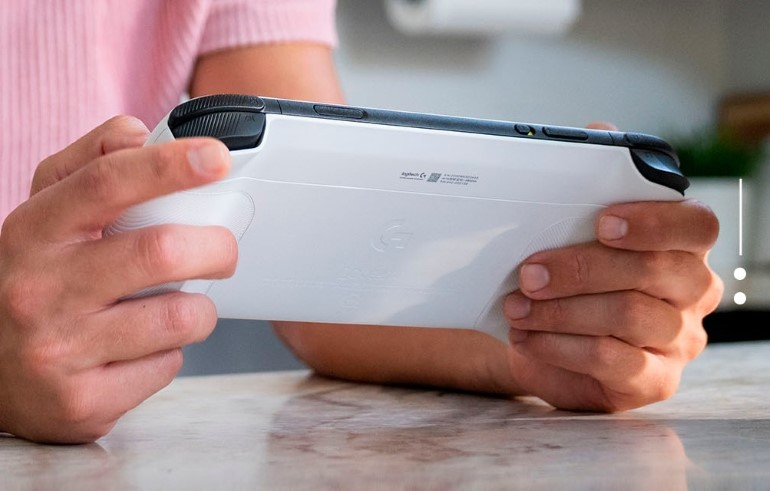