If there is one non-fungible token (NFT) project that has attracted attention for its originality, it is Loot! If you’ve spent any time on Twitter, or even OpenSea in September, you’ve probably realized the importance the news has placed on this unexpected job, to say the least.

In this series of 3 articles, Cryptoast invites you to explore various aspects of a project that has sparked a lot of conversation. So sit back and let yourself be told the story of Loot (for Adventurers) …

Economic diagnosis of the collection

While the first two installments in this series focused on the origins, ethics, and development of Project Loot after its release, this last article provides a factual perspective on the economic activity of Project Loot (for adventurers).

Measuring the development and activity of a collection requires easily accessible data in the Web 3.0 era.

As we will see, Dom Hoffman’s random generator analysis of Loot Bags activity indicates that interest in Loot weakens over time.

To get started, let’s look at the activity graph provided on the collection’s OpenSea page. We can easily detect 3 phases:

This is a good overview of the general trend. After a quick adoption, the pulse of Project Loot (for Adventurers) slows down. But this table alone is not heavy enough to make a strong argument.

👉 Find all the news about non-fungible tokens (NFT)

These are the queries created by @colinplatt through Dune Analytics that will allow us to take a closer look at the behavior of the participants. Note that this data only refers to the 8000 tokens of the original collection.

In addition, the group of individuals that we are studying is considered as economic actors: sellers and buyers who participate in the process of expansion or contraction of the market in question.

Therefore, the conclusions presented here do not refer to the artistic, moral or symbolic values ​​of the project and focus on the evolution of its economic aspect.

In Loot’s case, the market grew very fast before gradually fading into oblivion.

Judging by the number of buyers and sellers each day, this trend can be seen very clearly:

This graph illustrates typical behavior. Buyers’ dominance at the top and then their abandonment a few days later, leaving them behind in a slow market.

It is obvious from the daily sales volume. After a spike of 16,000 ETH on September 1, the volume drops dramatically to hit 2,746 ETH on the 6th. It follows a gradual decline, indicating that fewer and fewer tokens are being traded. 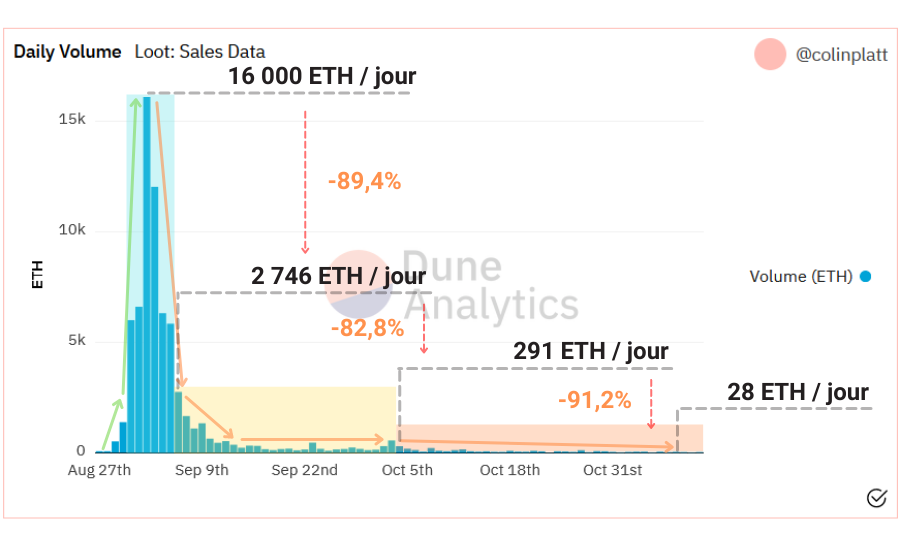 Currently, the sales volume is struggling to exceed 30 ETH / day. With a minimum price of almost 3 ETH, this means that on average 10 bags of loot have been traded every day for several weeks.

This phenomenon is perfectly corroborated by the evolution of the size of the transactions, illustrated by the color transition of the bars in this histogram.

For now, it looks like the overall loot commitment (for adventurers) is waning.

Finally, let’s check if new entities want to take over. By looking at the cumulative number of unique holders, we can say something about the growth of active entities.

Graph of the number of unique portfolios – Dune Analytics

After a strong influx of entities during the initial hype, stable growth is established as of September 5. Therefore, very few new and unique wallets will become loot bag holders.

With an average of one new entity per day, this number stabilizes, a sign that the market is experiencing almost no newcomers.

👉 Read: Photoshop software adds an option that makes it easy to create NFT

However, endowed with an exemplary participatory spirit and an active community, the economic profile of the Loot project does not indicate reassuring signs.

Following its initial market expansion, the move quickly lost momentum before exhausting itself and nothing bodes well for a turnaround in the current trend.

Ultimately, these observations do not make Loot a ridiculous or utopian project. Despite an economic failure, Loot (for Adventurers) has earned the admiration of many creators and reminds us that economic value does not necessarily reflect artistic merit.

Receive a summary of the news about cryptocurrencies every Sunday 👌 And that’s it.

My goal is to inform everyone about the state of Bitcoin (as an asset and a distributed network) through the prism of on-chain analysis.
All articles by Prof. Cadena.