why does this matter

In the last three months, the number of whales holding more than 10,000 BTC has increased by 12.7% from the 9-year record low recorded at the end of October, according to information and financial data platform Sentiment.

In the last 3 months, 10 new #Bitcoin whale addresses have resurfaced that hold 10k or more $BTC. This is a 12.7% increase from the nine-year historical low of mega whale addresses that were recorded in late October. https://t.co/XxxWNnm7sL pic.twitter.com/CWzcrnG1Pf

Large bitcoin accounts accumulated coins in early December, except they plateaued towards the end of the month. As the pace of whale accumulation slowed, more and more small accounts or “little fish” began buying tokens in late 2021, Delphi Digital explains in an emailed note.

Although some analysts interpret this buildup of retail investors as a positive sign, the flat calm of the whales could spell trouble for the centerpiece of the crypto sphere.

“This is obviously an ideal scenario to analyze the whale accumulation as it tends to coincide with a BTC price increase. The lack of whale activity would suggest that the worst is yet to come,” the research firm continues.

Meanwhile, Ethereum co-creator Vitalik Buterin on Monday shared a paper written by researchers at Peking University and Duke University, discussing the implications of implementing the London hard fork in August.

“We’re seeing dwell time drop significantly after the London hard fork, which could be a result of lower gas prices and varying block sizes.” 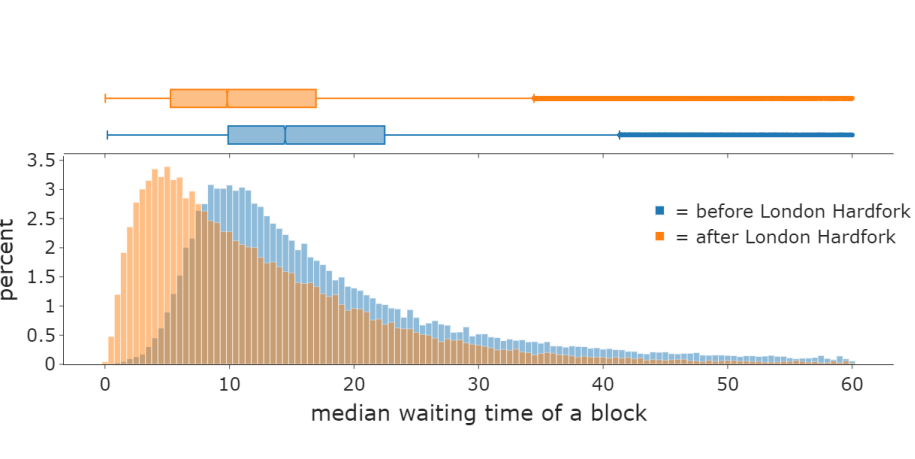 Average waiting time for a block on the ETH network.

The researchers’ findings indicate that the hard fork did not reduce transaction fees, it merely “simplified fee estimation for users.”