‘White coat, black rage’: Interns and medical students demonstrated on Thursday against a fourth year of internship for future GPs, a reform that opponents say will exacerbate the profession’s unattractiveness without diminishing medical merit.

Several hundred people gathered in Paris in the afternoon in front of the Panthéon before taking the direction of the Ministry of Health, an AFP journalist noted.

The demonstrators marched through a forest of posters reading “Farewell to my dreams” or “Poorly trained students, poorly cared for patients.”

“Future doctors, not minions,” we heard in the ranks of a demonstration organized in Nantes, which, according to the police, gathered 300 people. Another march took place in Lyon, gathering, according to the prefecture, 700 demonstrators under a long banner “White blouse, black anger.”

Gathered at the behest of a huge inter-union union, demonstrators protested the addition of a fourth year of general medicine internships, which must be done “as a matter of priority in areas with insufficiently dense medical demographics,” according to the Social Security Funding Bill (PLFSS).

With this 4th year of internship, and therefore “this 10th year of medical training, almost one in two students is questioning the choice of general medicine,” estimates Yael Thomas, president of Anemf (medical students), citing data from a recent survey.

“The reform introduces doubling the number of outpatient internships without doubling the number of internship leaders,” of which there are 12,000 today, for his part, regrets Rafael Prenaud, president of Isnar-IMG (general medicine interns). In other words, “the interns will be alone in their quarters under the supervision of doctors who may be 20 km away from them.”

Demonstration of interns and medical students against the fourth year of internship for future general practitioners, November 17, 2022 in Paris (AFP – Christophe ARCHAMBAULT)

“It will be another paid year for student status, which is also unsupervised. This is dangerous for both doctors and patients,” rumbles in a Parisian procession, 23-year-old Camille Fiya with a stethoscope around his neck, the fifth year of study in Bordeaux.

In Nantes, Carolan Seiler, a 27-year-old future general practitioner, holds up a sign that says “A dead doctor doesn’t cure!” denounce the psychosocial risks weighing on his corporation. “We’re all starting to get a little tired of patching up holes in the system, even though we were never responsible for those holes,” she notes.

Those concerned are already doing their share of the effort, says 24-year-old Valentina Silva, a third-semester intern in the Faculty of Medicine: in medical deserts. In our internships, we travel everywhere, we know it.” 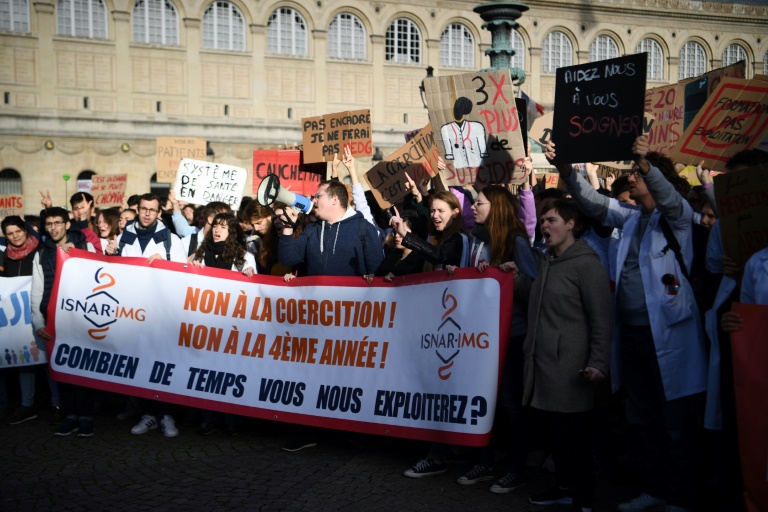 Demonstration of interns and medical students against the fourth year of internship for future general practitioners, November 17, 2022 in Paris (AFP – Christophe ARCHAMBAULT)

To prepare future doctors for the next generation, “we should not send them to hell, to the depths of the medical desert, and let them be disgusted,” said Dr. Michel Tillet of the Confederation of French Medical Unions (CSMF) at an event in Lyon. ) Rhone. He advocates medical centers “well located in cities with at least one college” where young doctors can find support from colleagues.

Compared to the fourth course, “which may increase students’ anxiety,” members of the profession find it more beneficial to accompany the installation with transportation and housing.

“We are 90,000 generalists: we are not enough and we will be gone for some time,” says Elise Fry, president of ReAGJIR, which brings together young people working and replacing.

Before the sling, Minister of Health François Braun dropped the ballast by announcing an amendment to the PLFSS to allow certain internships to take place in the hospital, and not just in the city.

“Advance payment”, recognize the trade unions, which, however, consider it “largely insufficient”. Moreover, the government amendment was not retained in the version of Sekou’s budget voted by the Senate and will have to be presented again in the second reading in the Assembly.

The government should use article 49.3 of the Constitution before the deputies at the beginning of next week on this text.