True-false metaverse. During our Meta-Hebdo, we regularly analyzed the growing interest of the giants of Web 2, the modern Internet, in the metaverse. Having monopolized their entire concept, even if it means rejecting its fundamental principles, Meta, Microsoft, Sony and many others have set their sights on this virtual world, analogous to our reality.

Thus, decentralization, interoperability, economic freedom of users are many principles trampled by these financial giants, which eliminate these significant problems through the creation of centralized and closed places. In his Metaverse Sector Report written for CoinShares and published on July 15, 2022, analyst Max Shannon points out the shortcomings of these promising false metaverses.

In order not to get lost in Meta Hebdo:

Definition of the Metaverse: Hope vs. Reality

From the very beginning, in his report, the author defines the metaverse as we can observe it today. It is clear that the two definitions of the concept are opposed. Without much enthusiasm, the author therefore rightly deplores the development of a metaverse seen as a social space, an extension of the Internet as we know it into three-dimensional space, virtual worlds sealed off from each other, exacerbated by the massive use of advertising.

Enhanced by Web 3 technologies, the concept of the metaverse in its own sense should be a space of free exchange. Its economy, transactions and interactions are driven and managed by users. Thus, the metaverse will by no means be a game or an application: it will be something more.

A metaverse that worries future users

The giants of big technology, exhausted by the progress of Web 2, have therefore redefined the metaverse. They have made their job easier by forgetting some of the concerns raised by users. According to some reports, the last obstinate people are worried and not very interested in the version proposed by GAFAM.

This is then evidenced by Google Trends data. The interest of the metaverse in the search giant is practically absent. The number of mentions collected is no more surprising. In the hollow, the metaverse seems to be carried only by a lesser, but still existing user attachment to the NFT.

According to a group of 4,420 US adults, the report explains the lack of public enthusiasm. Indeed, to the multiple-choice question, “What are your concerns about the metaverse?” the results were as follows:

In addition to the fear of potential users, there are geographic differences. The real barrier to global adoption of the concept is fundraising, which represents a disparate enthusiasm for the metaverse. Thus, the report data highlights that the level of entrepreneurship in the metaverse in the United States is 3.54 times higher than in Asia.

Thus, virtual world masters, venture capitalists and other American investors own more than half of the so-called Web 3 companies. These differences are questionable, especially since they do not necessarily correspond to the differences that characterize the adoption of cryptocurrencies. For example, South America, which is generally supportive of cryptocurrencies, remains not very sensitive to the metaverse.

The Metaverse That Doesn’t Actually Exist

If we expand the thought of the report, we can understand that the metaverse proposed by GAFAM and other giants of BigTech is only a continuation of the growth policy aimed at maximizing profits. In addition, the development of virtual helmets created by Meta is an opportunity and a possible significant fortune, given, for example, the number of users on Facebook.

This concept of a metaverse is the “fastest way” to propose an unfortunate metaverse, a true trompe l’oeil of our reality. Indeed, the centralized approach to the metaverse proposed in Horizon World of Meta or Roblox does not take into account the benefits of decentralization.

Max Shannon’s speech can then be compared to that of Vitalik Buterin, who this week complained on a non-metaware twitter dominated by Web 2 giants:

>> Are you friends with crypto? Register on the FTX platform (commercial link) <

Half a fig, half a grape

The report also recalls that regulation has lagged behind the evolution of technology and that the Web 2 giants have overtaken the latter. Thus, the only role that regulation assigns itself at present is not to educate, but to protect consumers. An obvious example is the reaction of the SEC and the international financial police to the Terra Luna case.

As far as the metaverse is concerned, some governments are also starting to launch into the other world. The Ministry of Digital Regulation in Dubai, VARA, the real cop of the metaverse, has settled in The Sandbox. A political agenda in itself in Dubai society, the metaverse has become a real economic and political issue.

The Central African Republic, with its Sango Coin and the metaverse that accompanies it, sees Web 3 as an economic opportunity. This would give him independence and financial freedom. However, governmental, isolated, and self-serving approaches do not offer an open metaverse.

Also important is the concept of private property, proof of its existence and control over its security. This allows users of the metaverse to evolve in a circle of trust. NFTs occupy an important place here.

A tamper-resistant, non-fungible token solves the issue of ownership and identity. A real avatar, a virtual representation of your ego, the latter can be true to itself, to its image. Conversely, it can be an image of who you want to be—or what you cannot be—in reality.

However, NFTs are prone to scams and other scams that remind us all too well of the importance of caution in this ecosystem. Thus, the insecurity associated with ownership is a brake on the adoption of this technology. A closed metaverse simplifies user security.

Blockchain Interoperability: The Achilles Heel of the Metaverse

In addition, to be able to go beyond the definition of a metaverse proposed by the giants of the Internet 2, the CoinShares report highlights the necessary progress we need to make in communicating and supporting blockchains with each other: that is interoperability. This progress would then allow transactions, exchanges, and social relationships in a single metaverse. MetaMask, Animoca Brands, The Sandbox and many others are working on creating interoperable worlds.

However, bridges, bridges from one blockchain to another that provide this interoperability, are currently wearing a stupid cap. As explained in the latest report published by Chainalysis, this is one of the major security concerns of the protocol. The historic Ronin Chain hack, Wormhole, and the recent Harmony blockchain hack are just a few revealing examples. 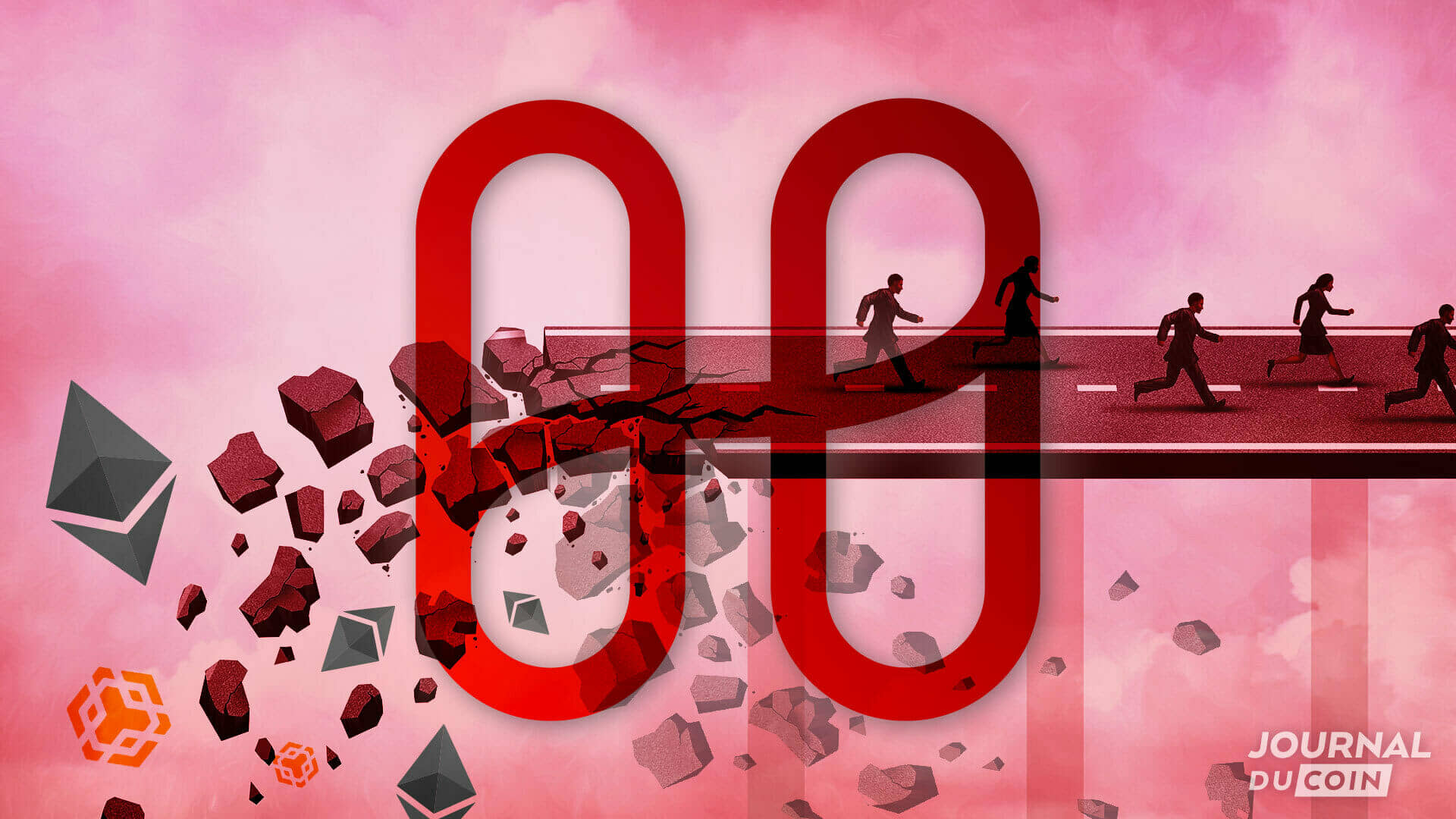 Then it should be understood that the development of the metaverse as it should be, which was made possible thanks to the blockchain, will take time. Investor skepticism, accompanied by a harsh crypto winter, can be discouraging. Faced with the impossibility of an open metaverse accessible to all, some propose favorable outcomes for the development of a decentralized and interoperable exchange space. Tomorrow’s decisions may be in their hands.

The report then uses ENS, the Ethereum Name Servive, a real-life nominal gateway on the Ethereum blockchain as an example, trading at the price of gold. They do have the wind in their sails. They allow you to define a broader property that goes beyond a single NFT.

Moreover, the success of some emerging metaverses, we think, such as The Sandbox, is associated with cryptocurrency. The metaverse then spans the entire ecosystem. Thus, owning a governance token allows you to participate in decision-making that is important for the ecosystem of the metaverse.

We may then wonder if the metaverse as we know it represents the agony of Grid 2 as it struggles to survive. The early, yet unknown idea of ​​a virtual world is intriguing. It also scares some who are disgusted to see brands like Carrefour settle into the virtual world. Then the observation is bitter: the slow implementation of the blockchain will allow us to propose a metaverse closer to its truth. What form will it take? How will compatibility and security issues be addressed? Faced with an equation with so many unknowns, there is only one certainty left: the metaverse of 2022 will not be the metaverse of 2035.

It is not necessary to want to shake your head in all directions when shouting “There is no future !!” ? You can also opt for peace of mind and seamlessly dive into the world of cryptocurrencies by trading your first bitcoins on the FTX platform. By signing up for FTX using this JDC trading link, you will additionally receive a lifetime discount on trading fees.