Between ordinary LED LCD TVs and OLEDs is now the Mini-LED. This backlight technology, the latest innovation in television, uses thousands of small light-emitting diodes distributed in numerous independent control areas. TCL was the first to launch Mini-LED TVs to the general public, like the X10 we tested, but at CES 2021 other big names joined the fray, like Samsung who christened their Mini-LED Neo QLED. And LG who has opted for the name QNED.

Before we get into the details of these acronyms, let’s start with what makes Mini-LED technology interesting. By using more smaller LEDs and dividing the screen lighting into more zones, a TV can exert more precise control over its backlight – by turning off the LEDs in the areas of the TV. It is assumed that the image is displayed in black, for example, in order to obtain a much better contrast and image quality since the phenomenon of blooming or halo effect is reduced, one of the main defects of LCD screens.

A light blue halo surrounds the honey flow at the bottom of the image, this is what we call Blooming. This photo comes from our 2020 Samsung Q95t test.

The advantage of Mini-LED over OLED is its superior brightness which provides better performance in daylight or in HDR. Now that Samsung and LG have joined TCL in this niche, you will hear a lot about Mini-LED TV.

The difference between Mini-LED and Micro-LED

In reality, the Mini-LED is only one step on the road to the Micro-LED, but these two technologies are very different. Micro-LED technology is currently reserved for giant screens because LEDs are difficult to miniaturize and for very wealthy people. Micro-LED displays, like Sony’s Crystal LED and Samsung’s The Wall, use millions of red, green and blue LEDs so that each sub-pixel in the image can be turned on or off completely. Then we say that they are self-emitting, like OLED screens. 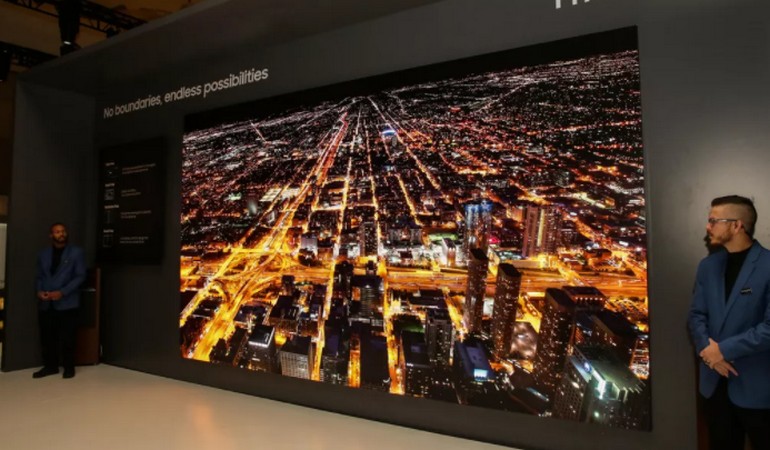 Micro-LED technology is shown here in a massive 219-inch form factor that Samsung calls The Wall.

Mini-LED TVs don’t need to be huge, the LEDs themselves are much larger than Micro-LED screens and fewer in number. Like the LEDs found in today’s televisions, they make up the TV’s backlight. A layer of liquid crystal, the LCD screen itself, modulates the light to create the image. Micro-LEDs no longer need the LCD layer and also dispense with backlighting as each pixel consists of three LEDs, one red, one green, and one blue to form the image.

To understand Mini-LED, you must first understand the basic operation of LED TVs. In modern LCD televisions, we find a greater or lesser amount of light diodes. They emit light when they feed. They vary in size: they are usually around 1 millimeter, but can be less than 0.2 millimeters. These LEDs collectively form the backlight.

In some televisions, the LEDs are located on the edges, facing inward, these systems are called Edge LEDs. In others, they are behind the screen, directed towards the viewer, they are called Direct LED or Full LED. To improve image quality, limit blooming, or increase contrast, we practice what is called local dimming. In the case of a full LED, the LEDs are divided into small groups called zones. The more dimming areas there are, the more finely the TV can control its backlighting. You can reduce the intensity of the LEDs behind the dark areas of the image and focus their power on the bright areas for example, which will improve the contrast (difference between the darkest black and the most intense white).

On the left, the image as we would see it on a Full LED TV with local dimming. To the right is an illustration of the backlight as you would see it if you could remove the coating from the LCD screen. Placed on the back of the TV, LEDs cover fairly large portions of the screen (that is, they create light for several thousand pixels). Pixel or precise lighting is not possible with conventional LCD screens. © Geoffrey Morrison / CNET

Ideally, you should be able to control the light from each pixel to produce an excellent contrast ratio. This is how OLED works, for example. With the LCD screen, on the other hand, it is much more difficult. Not all light can be blocked, there are leaks, and the plaster may turn grayish or bloom. A phenomenon that does not exist with OLED.

Local dimming alleviates this problem, but there is no LED for each of the 8 million pixels on a 4K TV, let alone 24 million to illuminate each sub-pixel. Rather, there are thousands or even hundreds of thousands of pixels for each LED or each area). There is a limit to the number of LEDs that can be bundled into a TV panel before power consumption, heat production, and cost turn to brakes. This is where the Mini-LED comes in.

Here’s the same image (left), this time with a Mini-LED matrix backlight (right). Note that you can see a lot more detail compared to the full size LEDs in the first image above. With many more LEDs, the backlight has a higher “resolution”. Ideally, as with OLED and Micro-LED, it would be illumination per sub-pixel. the Mini-LED it gets a little closer without the cost of the other two technologies. © Geoffrey Morrison / CNET


Although there is no official threshold, LEDs less than 0.2 millimeters are generally referred to as Mini-LEDs. They are usually 0.1 millimeters or less. When they are smaller, around 0.01 millimeters, they are called Micro-LEDs, although the micron that gave this technology its name is actually 0.001 millimeters.

The smaller an LED is, the lower its emitting capacity because there is less material to create light. We can compensate a bit for this phenomenon by supplying them with more electricity (“controlling” more), but there are also limits: energy consumption, heat and longevity.

At the same time, LED technology continues to advance to make them more efficient. New manufacturing methods and other factors make it possible to create the same amount of light with less energy or more light with the same energy.

One of the first Mini-LED televisions was the TCL 8 Series. It included more than 25,000 Mini-LEDs that were distributed in approximately 1,000 zones. No manufacturer other than TCL officially lists the number of LEDs in their TVs, but it can be assumed that none have as many as 25,000 at the moment.

You shouldn’t expect all Mini-LED TVs to have that many LEDs. On the one hand because of the size of the TV (a smaller screen can logically carry less LEDs) and on the other hand because the low-end models will also have less, but probably more, than normal LED TVs. For example, the 2019 TCL 6 Series had 1000 Mini-LEDs and 240 zones.

Although the generic name is Mini-LED, some manufacturers such as LG and Samsung prefer to use their own terminology.

Samsung has bet on the Neo QLED, which is based on years of QLED TV marketing, that is, equipped with quantum dot filters that improve colors and contrast in particular. LG is talking about QNED, a term extrapolated from its Neo-LED technology. In fact, it is the same technology, although there are likely to be differences in the way these companies implement the Mini-LED. 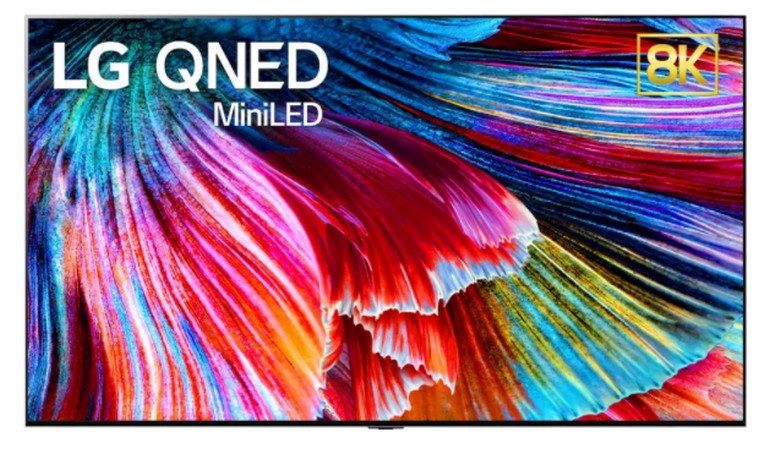 TCL introduced its third-generation Mini-LED TVs called the OD Zero, X92 and X92 Pro this year. Compared to current models, TCL claims that OD Zero TVs will be much thinner thanks to a drastic reduction in the distance between the layers. backlight and LCD screen layer.

Now that we’re at 4K and 8K for larger sizes, picture definition is no longer really at the center of the battle between manufacturers. The bottom line for image quality right now is having the deepest blacks and the brightest whites. Add to that beautiful, vibrant, hue-rich colors and you’ve got the recipe for the perfect TV.

The fact that LG, Samsung, TCL or Hisense have launched Mini-LED TVs this year says a lot about their enthusiasm for the technology. It will be interesting to see how it fares against OLED in the short term and ultimately against Micro-LED and future technologies like quantum dot OLED that Samsung is currently developing.