It’s a great dash cam for the price, with top-notch 4K UHD day and night recording, GPS, and 64GB of built-in storage. We also like friendly voice notifications.

It’s hard not to love a dash cam that clearly utters a friendly greeting: “Miofive is here for you!” when first turned on. While perhaps a bit presumptuous, it turns out to be a harbinger of a very good dash cam at a very nice price of $150 for 4K capture with GPS.

This review is part of our ongoing review of the best dash cams. Go there for more reviews and buying advice.

One of the things I really like about the Miofive dash cam is that you just mount it on your windshield, turn on the ignition and voila, you’re up and recording. In the world of dash cams that want you to connect via an app and then insert and format your SD card before doing anything, this is refreshing. However, there is an app and it is well organized and user friendly.

Miofive is a WDR (Wide Dynamic Range – Rich Colors) 4K UHD (3840×2160/Sony IMX450 Sensor) front only DVR with 140 degree field of view and 64GB internal memory. This last feature is handy, and Miofive claims that as an onboard media card (eMMC) it lasts 10 times longer than a standard NAND SD card, but it still wears out over time.

To this end, you can reduce the resolution to extend the retention period. 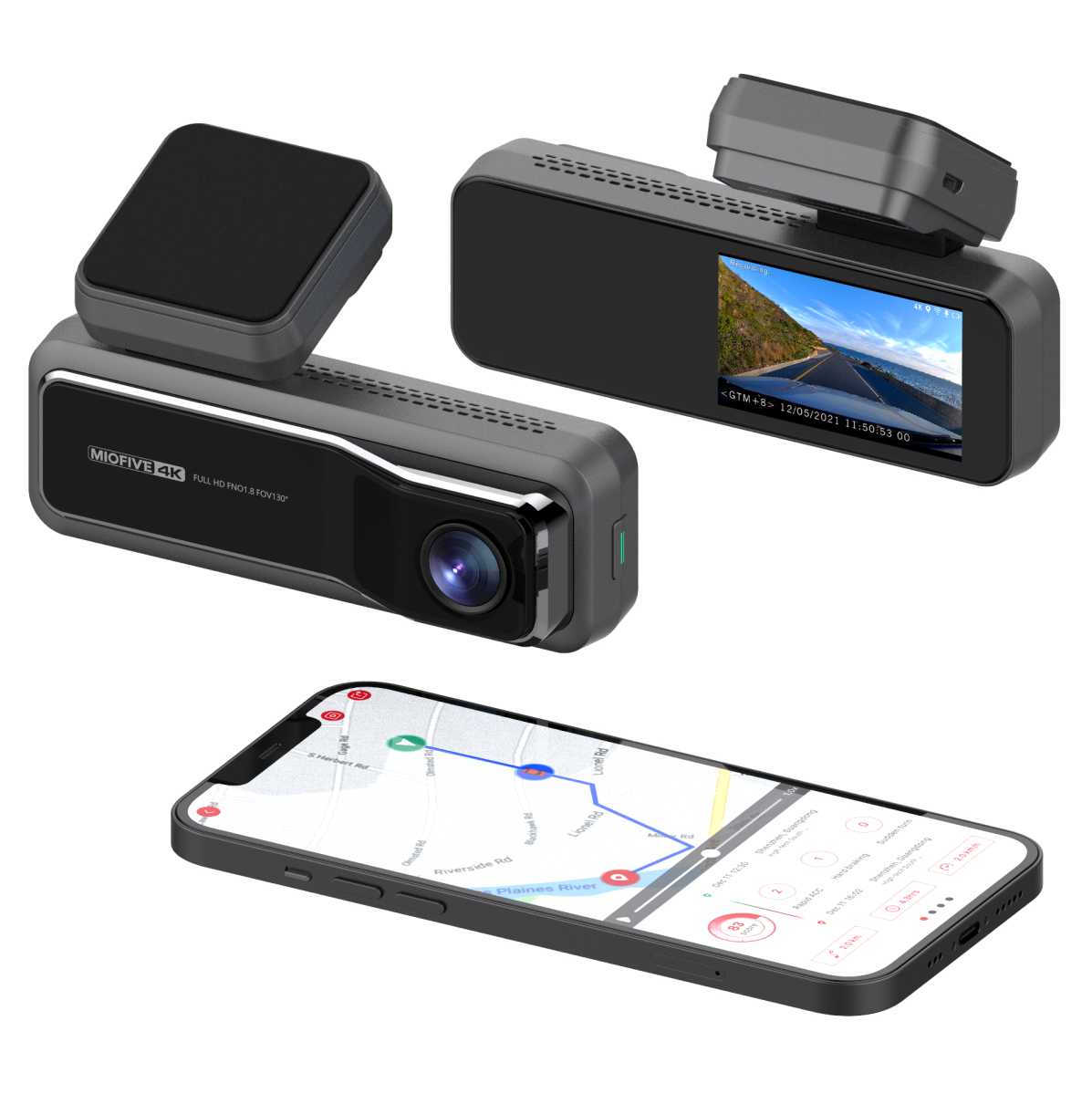 Physically, the main body of the Miofive is a long rectangle (116 x 60 x 55mm) that attaches to the GPS mount with a permanent hinge. There is no horizontal adjustment, so align it when attaching to the windshield. The entire assembly slides up and off the actual sticky mount.

Unusually, Miofive has only one physical button – the multifunctional power button. However, if you look very closely at the back of the camera, you’ll see three small dots to the right of the 2.2-inch color display that electrostatically mimic button presses, allowing you to locally set up and control the camera.

Since there is 64 GB of internal storage and not a removable SD card, you either need to download the video to your phone or connect Miofive to your computer via USB to access the video locally. Alas, the included Miofive cable is for charging only (they should be banned!), so you’ll need to provide a data-capable cable yourself for the first, much faster method.

Also, macOS didn’t like Miofive, stating that the drive is unreadable despite being identified as exFAT. Even after reformatting with macOS Disk Utility. Windows had no problem reading Miofive. 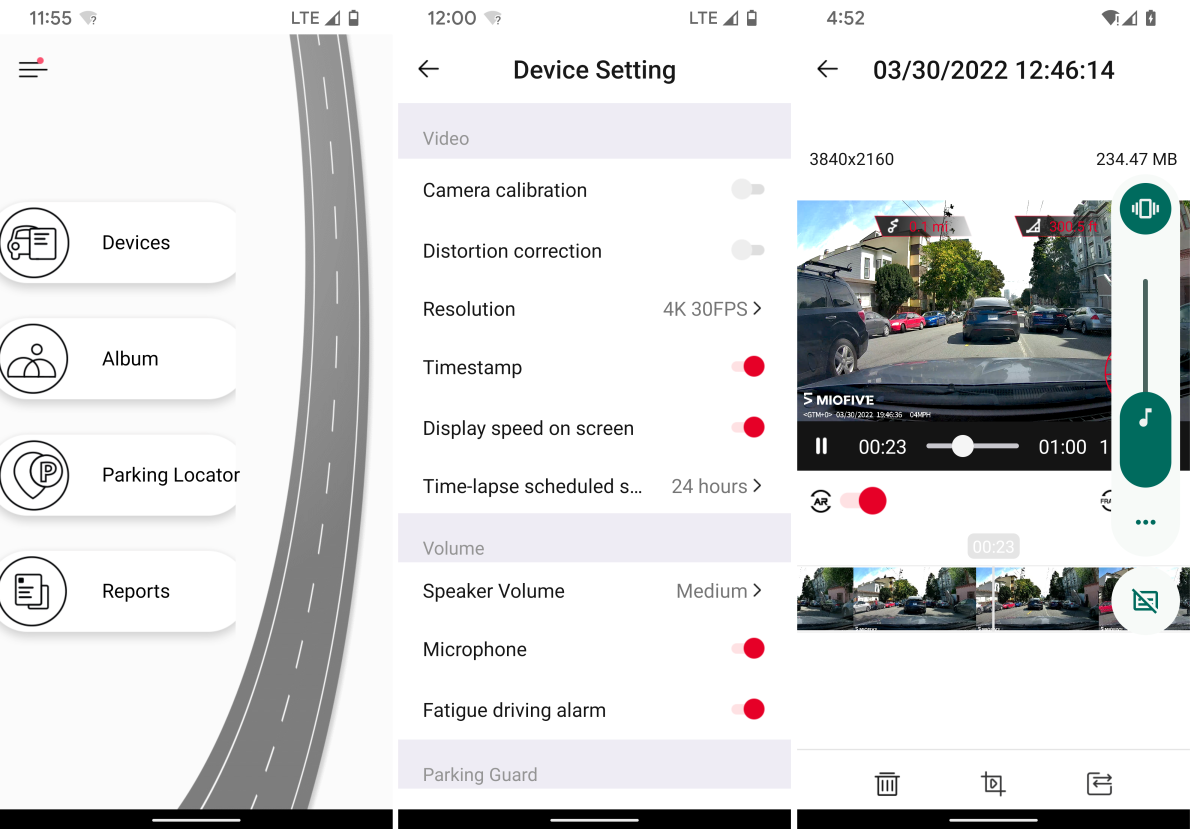 Three pages from the Miofive app, including live view settings.

Miofive’s driver assist features include an alert when a vehicle is moving in front of you and a fatigue alert that will alert you at regular intervals. There is also a parking mode where the camera wakes up and records if the g-sensor is disturbed in any way.

Miofive shots are very good both during the day and at night. They’re not quite on par with the Cobra SC 400D, but not by much, and the Miofive is $250 cheaper than our favorite three-channel DVR. A 140 FOV lens gives a slight fisheye effect, but it handles well at normal eye height and you can still pick up details in the periphery.

Please note that the times shown in the pictures are not correct. While the GPS set a universal date and time, it was initially unable to determine the correct time zone from the coordinates. This may have been fixed by a firmware update or a subsequent connection to the phone app, as Miofive now displays the correct time. 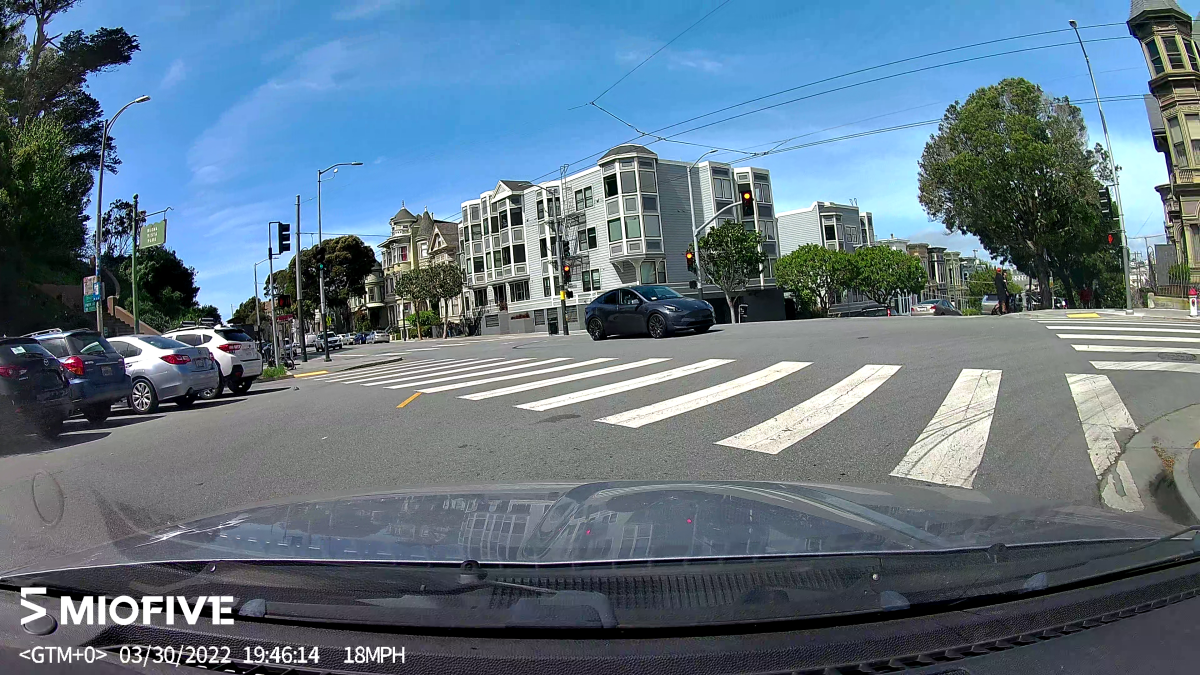 Miofive captures a good amount of detail, although it’s not the best 4K I’ve ever seen. The best costs $150 more.

The day captures the difference in lighting well. You can still read the street cleaning sign on the right, while the license plates on the left (if close enough) are also readable. In the image below, they are a little further away, so you can’t always read them. 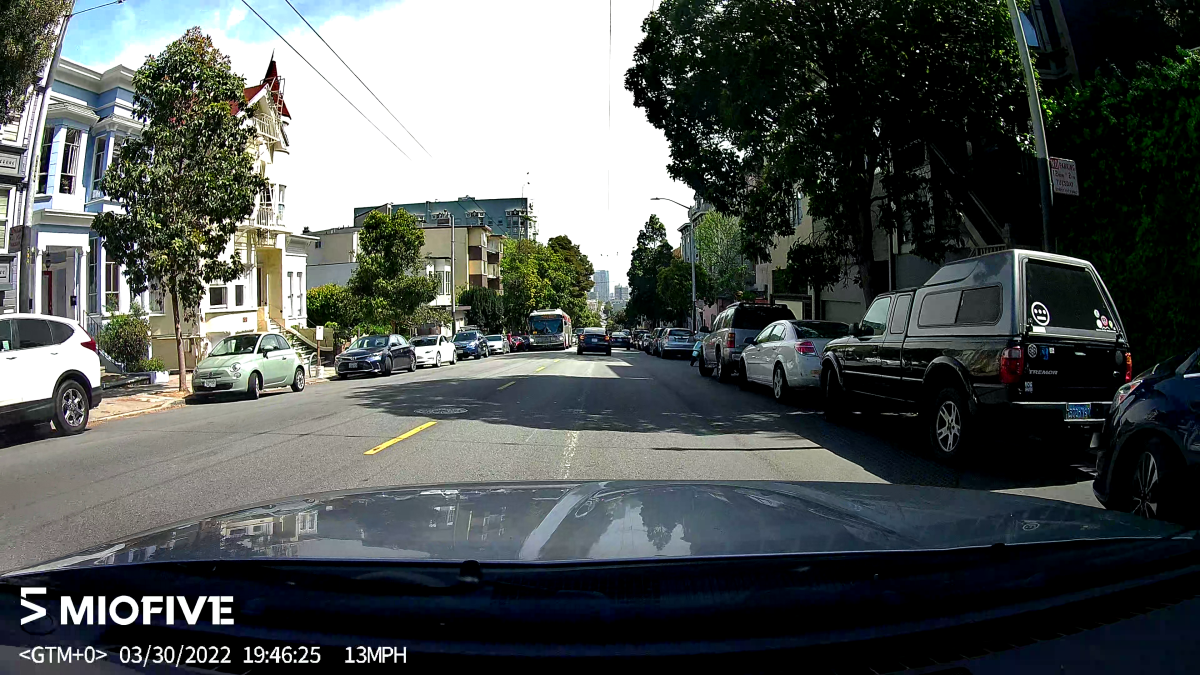 The picture below was not completely dark, but dark enough for testing. Take this image and make it brighter and you will see all the details you need. Also note how well it handled headlights that were almost directly at the camera. 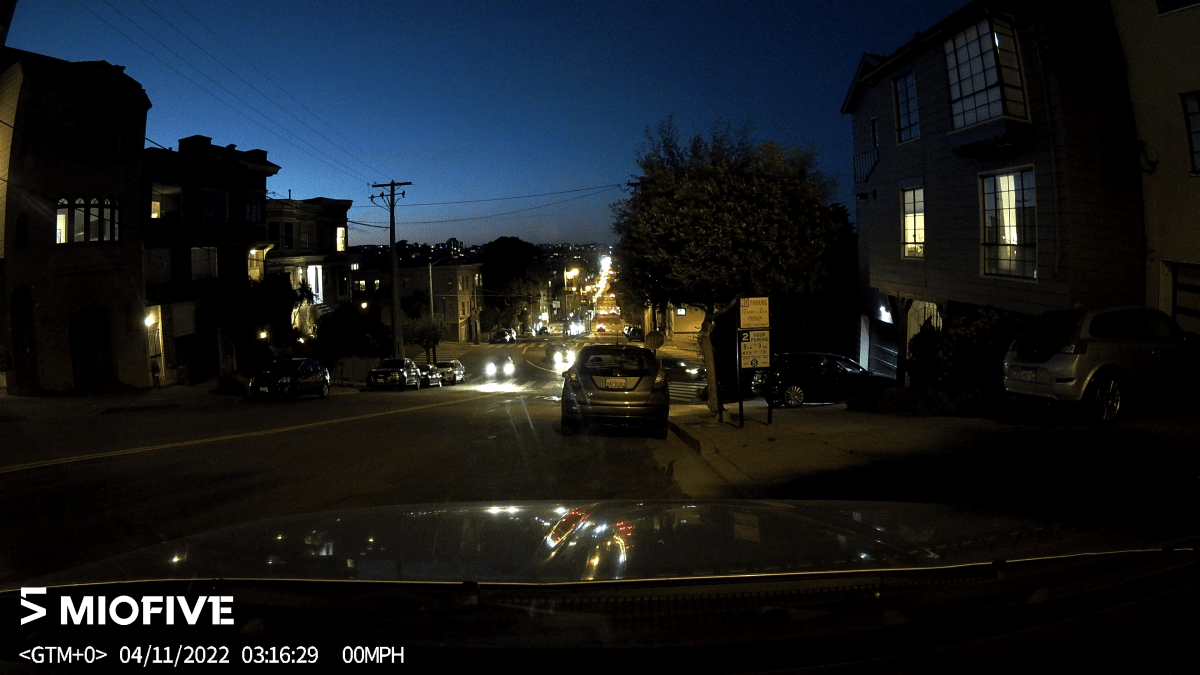 Miofive’s night shots were very good and revealed a lot of detail. You can see more details if you process the photo after the fact.

There is little to complain about the Miofive records. There is a 500mAh battery on hand that will power the camera if the 12V battery fails, as it can if your electrical system is damaged in a crash. In my testing, it lasted a good 10 seconds after a power outage.

You can’t argue with Miofive’s capture quality, ease of use, features, or style. I really like the product. The internal storage ensures hassle-free setup and operation, and we hope it will last you at least a few years. If not, Miofive says it will replace the camera, although there is no mention of whether this will happen after the 18-month warranty.