Launched in August 2020 and marketed for the start of the 2021 school year, Odaptos is based on the detection of human emotions using artificial intelligence (AI). Through interviews, he aims to gain a deep understanding of the emotions, behaviors, and needs of website users.

Emotions captured and detected by an AI. This is the concept launched by two students: a Montpellier resident, Maximilien Joannides, and Felipe Restrepo, a Colombian who came to France four years ago. The two co-founders, aged 27 and 39, met at the Sorbonne University in Paris. Its objective is to offer its clients (from start-ups to digital agencies) the possibility of improving the experience of its users on its website. To do this, they conduct individual interviews with these users in order to collect their emotions using artificial intelligence.

Artificial intelligence is capable of recording and analyzing interviews in real time.
•
© Odaptos

These tests, generally long and expensive to perform for humans, require very little time for an artificial intelligence, which is able to record and decipher in real time everything that the people questioned say, do, think and feel … provide an “sentimental curve” very quickly. The AI ​​test is therefore more reliable. Not in terms of perception, but in terms of information retrieval during interviews.

A human notices, yes, but inevitably the micro-interactions, the micro-gestures, will be lost. The AI ​​will do it without missing a beat.

When asked about the impact of artificial intelligence on job losses for “real” people, Maximilien responds: “We’ve thought about it. This software was originally designed for us. Obviously, we do not want to eliminate the profession of designer because there is always a need for Man in the last stage of understanding the story of the interviews. But it must be recognized that the previous steps are tedious and require a lot of time ”. 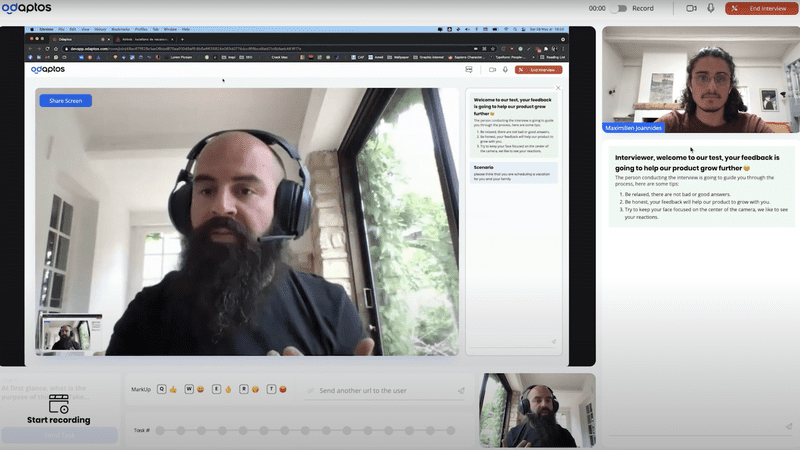 A test costs between € 50 and € 100 per unit, for thirty minutes or one hour of maintenance. This is less expensive than the solutions that are offered in the market and that are around € 5,000, 10,000. “Today, user testing is done by groups of three or four people. It takes them a few weeks to re-analyze the interviews. Thanks to AI, we shortened this analysis period and delivered the report much faster, “explains Maximilien.

The pandemic is sure to have widespread video conferencing services. This finally convinced the two young people of the usefulness of their tool, intended for large groups and design agencies, as well as young entrepreneurs who like them want to start their own company.

To start the business, they invested 20,000 euros each, obtained an honorary loan of 50,000 euros from Créalia and benefited from 30,000 euros in grants from the BIS (public investment bank).

If it is a bit early to talk about turnover, the co-founders, second winners of the Bercy Award for Innovation, hope to reach 450,000 euros in turnover by the end of 2022. Since the launch in September, the company has five clients from Lyon to Miami, in what goes through California.

At the end of the year, a fundraiser is being organized with the aim of hiring staff and thus building its team, which is expected to be about twenty people in 2023.

Maximilien and Felipe will also have the opportunity to present their innovation in Las Vegas from January 5 to 8, 2022 at CES, “Consumer Electronics Show”, the world’s largest exhibition dedicated to technological innovation. They hope to open up even more internationally and find new clients there.