The history of the formation of the Moon is still not completely clear, and that is why the collected lunar samples, valuable elements for the study of past geological activity, are so valuable in elucidating some mysteries. Fragments of lunar rock brought back to Earth in 2020 as part of the Chinese Chang’e-5 mission reveal that lava was present on the surface only 2 billion years ago.

If we already knew that the volcanic activity of the Moon lasted for a very long period of time, until now we only had a rough idea of ​​the transition to the cold phase. But a chemical analysis of the collected volcanic rock samples confirms to date that the Moon has remained in volcanic activity much longer than its size would suggest, reports an international team of researchers.

Why was there hope for Chang’e-5? Simply because it is the first mission to have recovered lunar rocks and returned to Earth for more than 40 years. Through careful chemical analysis, the researchers found that the collected rocks had formed 2 billion years ago, around the time multicellular life first appeared on Earth.

According to Carolyn Crow, a co-author of the study and a planetary scientist at the University of Colorado at Boulder, these are the youngest moon rocks ever collected. Details of the study were published in the journal Science.

According to the knowledge we have accumulated, the Moon formed about 4.5 billion years ago. Moon rocks from the Apollo and Soviet missions of the late 1960s and 1970s revealed that lunar volcanism was common for the first billion years of its existence, with flows lasting millions, if not hundreds of years, millions of years ago. .

Given its size, scientists believed that the Moon began to cool about 3 billion years ago, eventually becoming the arid, quiet star it is today. Still, the scarcity of craters in some areas has stumped scientists.

We know that parts of the celestial bodies devoid of volcanism accumulate more and more craters over time, in part because there are no lava flows that deposit new material that hardens into smooth extensions. The flatter areas on the Moon’s surface seemed to suggest that volcanism persisted after the Moon’s early history.

“Recent volcanism in a small body like the Moon is difficult to explain, because small bodies generally cool down quickly,” explains Juliane Gross, a planetary scientist at Rutgers University in Piscataway, NJ, who was not involved in the study. study.

In the past, researchers have suggested that radioactive elements may offer an explanation for subsequent volcanism. Radioactive decay generates a lot of heat. A sufficient amount of radioactive material in the Moon’s mantle, the layer just below the visible crust, would have provided a heat source that could explain the more recent lava flows.

Earth’s gravitational forces: the secret of persistent volcanism on the Moon?

To test this theory, the Chang’e-5 lander collected chunks of basalt, a type of rock that forms as a result of volcanic activity, in a previously unexplored area of ​​the Moon believed to be less than 3,000. millions. years. The team determined that the rocks were formed from lava flows 2 billion years ago, but chemical analysis did not reveal the concentration of radioactive elements one would expect if radioactive decay explained the volcanism. 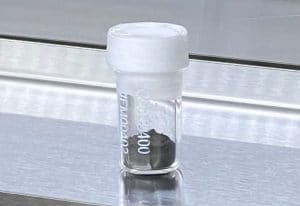 This discovery leads scientists to question the other forces that could have maintained volcanic activity on the Moon. According to Alexander Nemchin, a co-author of the study and a planetary scientist at the SHRIMP Center in Beijing and Curtin University in Bentley, Australia, the gravitational forces of the Earth could have liquefied the interior of the Moon, which would have allowed the lunar magma to continue to flow during a billion more. years, when it should have stopped.

“The moon was much closer 2 billion years ago,” says Nemchin. As the Moon receded from Earth, these forces would have lost their power until volcanism finally ceased. Asteroid and comet impacts may also have sustained the Moon’s volcanic activity, but more studies will be needed to learn more about this.

How AI makes it possible to better recruit and train your (…)

Plaine des Papayes: The cop has a green thumb … for cannabis

An atomic clock has measured the “gravitational” dilation of time to one millimeter.

The kidney from a pig successfully transplanted into a human, a world first

No Elon Musk Show During This Quarterly Call From Tesla

Tesla Beats Expectations in Q3 with Increased Production in China

How AI makes it possible to better recruit and train your (…)

Plaine des Papayes: The cop has a green thumb … for cannabis

An atomic clock has measured the “gravitational” dilation of time to one millimeter.

The kidney from a pig successfully transplanted into a human, a world first

No Elon Musk Show During This Quarterly Call From Tesla

Tesla Beats Expectations in Q3 with Increased Production in China