Released on October 4, Windows 11 is now the ultimate exponent of what Microsoft has to offer users. This is a free update and therefore it should be popular with users who showed it by installing it.

With a version heavily controlled by Microsoft, Windows 11 ended without having the expression that many expected. Now, 2 months after the first numbers, the reality is different. More and more users are migrating to Windows 11, which was naturally expected.

Installing and using the new Windows 11 was not an easy process. Microsoft’s requirements for this version have raised the bar and left many users behind, convinced of the possibility of installation.

So from what we can see now, the usage data for Windows 11 is very positive. The Windows 11 installation base has grown since last month and now has a market share of 8.6% for the standard version and 0.3% for the insiders.

Now that Microsoft seems to be opening Windows 11 even more, with access to new settings, those numbers are sure to grow. Compatibility issues will continue to be present, but now the basis for potential installations is even broader.

Something that is also already present in these figures is the latest update for Windows 10. This arrived very recently and already has expression in the figures presented. Its market share is already 3.7%. 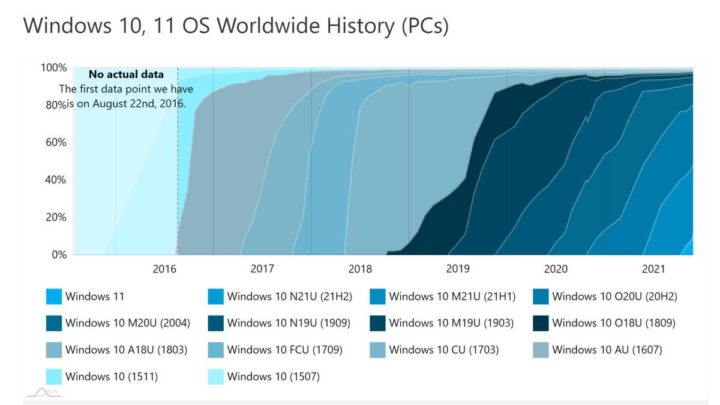 There are parts of these two versions, the fragmentation of Windows 10 is still very present and should be a reality in the future of this system. So far we have a recent version, 21H1 with more users, but the rest still have significant expression.

As the most widely used operating system on the Internet, Windows continues to occupy a unique market position that it is unlikely to lose. New versions save space and are quickly adopted by users, who constantly want new features and improvements.