On December 28, former radio host Pierre Trudel left his home in an ambulance. The 78-year-old man was weak and confused. When he arrived at the Santa Cabrini hospital, the diagnosis came: a mild heart attack. Mr. Trudel is in intensive care. Ten days later, his family receives a call. The old man contracted COVID-19, which affected his roommate.

Trudel is far from an exception. Getting COVID-19 in the hospital is becoming more common. Since January 1, Quebec health facilities have registered a daily average of 1,153 active cases of COVID-19 where the disease was contracted during a hospital stay, indicates the spokeswoman for the Ministry of Health and Social Services (MSSS), Marjorie Larouche. .

He’s not out of the woods yet. He has COVID at 78… but so far he hasn’t had too many symptoms. Apart from being very tired.

Sébastien, son of Pierre Trudel, on his father and the COVID-19 he contracted in the hospital

These “nosocomial” cases of COVID-19, like that of Mr. Trudel, have been “increasing significantly” since the beginning of 2022, admits the Ministry of Health. Indeed, on January 12 there were 1,671 active cases of nosocomial COVID-19. By January 14, that number had jumped to 1,783.

Please note: These nosocomial case numbers cannot be related to the number of daily COVID-19 hospitalizations recorded by the Quebec National Institute of Public Health (INSPQ), the Ministry specifies. “These are two different data universes and you can’t compare them,” says Ms Larouche. Hospitalized COVID-19 cases were admitted to the hospital, some for symptoms related to COVID-19, some for something else entirely, but all of these patients tested positive for coronavirus upon hospital admission.

In the case of nosocomial patients, this initial test was negative. Later, during their hospitalization, these patients contracted COVID-19 and were declared positive. “The number of active nosocomial cases per day in our hospital setting is used for outbreak management, so the information is captured conservatively. In case of doubt about the epidemiological link, we ask the establishments to enter it as a nosocomial case. This precaution allows anticipating possible outbreaks and implements the precautionary principle. Thus, as a precaution, establishments tend to identify more cases”, says Marjorie Larouche.

But once your positive test is obtained, do these nosocomial cases enter the daily calculation of hospitalizations? And if so, what proportion of cases do they represent? We put these two questions to the Ministry of Health. At the time of publication, we had not yet received a response.

One thing is certain, these outbreaks in healthcare settings are clearly on the rise, according to INSPQ data. In fact, their number has increased by almost 30% between New Year’s Eve and January 18. From a thousand active outbreaks at the beginning of 2022, we have increased to almost 1,300 in the last few days. The proportion of outbreaks in health facilities represented 56% of outbreaks at the beginning of the year; now we are at almost 77%. Since December, the rise has been vertiginous (see graph). 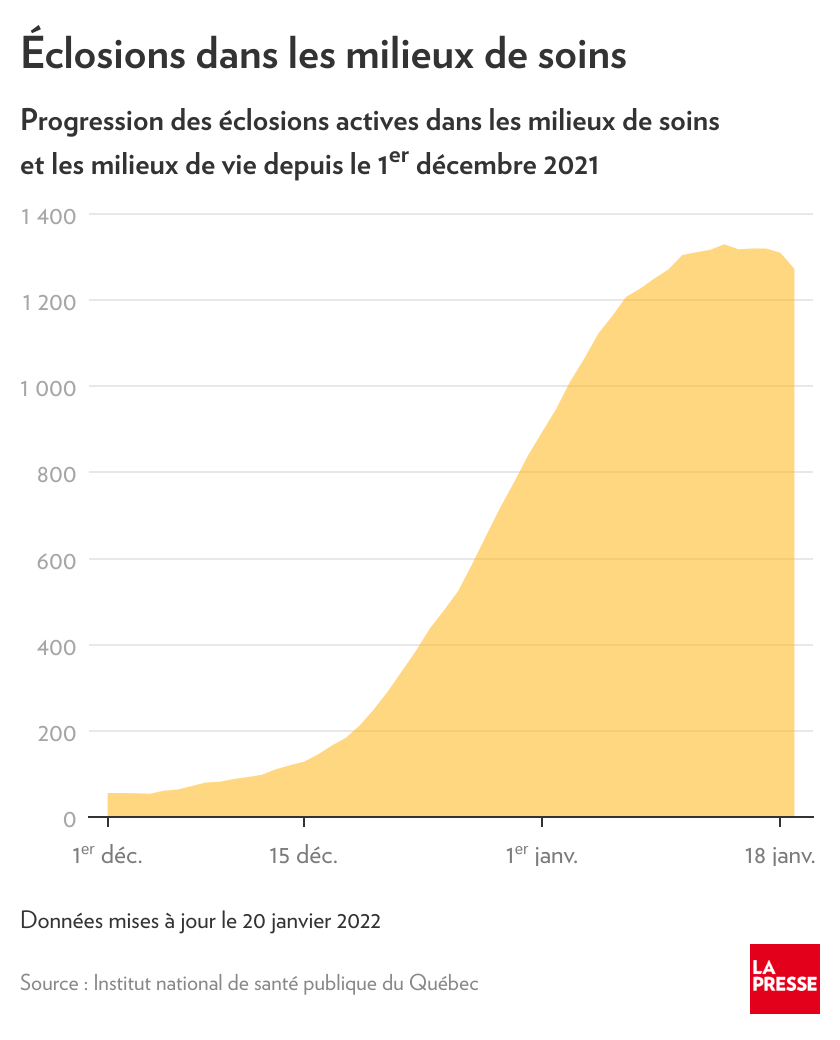 Last year, the National Institute of Excellence in Health and Social Services (INESSS) counted nosocomial cases of COVID-19. It had been established that one in seven hospitalized COVID-19 patients had received their first positive test result more than seven days after admission, making them a very likely case of nosocomial COVID-19. Unfortunately, a year later, INESS no longer performs this calculation: it is impossible to accurately compare with the current situation.

But it is clear that the Omicron variant has been a game changer in hospitals, says Marjorie Larouche.

We can see that since the beginning of the Omicron wave, we have had a significant increase in outbreaks and nosocomial cases in our living and care settings. There are many more nosocomial cases that have been detected for three weeks.

Cases like that of the father of Irene T. The 85-year-old man had a pulmonary embolism. He left his nursing home for a Montreal hospital on December 29. Anxious to preserve her father’s anonymity, his daughter asked us not to reveal his name and the name of the facility where he was admitted.

“We were very scared when we found out that he lived with a positive case,” says his daughter. What had to happen happened: like many neighbors of his apartment, on January 5 his father was also diagnosed with COVID-19. “So he recovered from his stroke, but positive for COVID. And completely asymptomatic. “We sent him to a red apartment, to a tiny room, from which he could not leave… And his nursing home did not want to take up a positive case within its walls.

Irène T. finally refused to leave her father locked up for 10 days in a very small room: she took him home, set up a living space for him on the ground floor, and moved herself into the basement of their residence.

Because the situation was a real nonsense, his daughter denounces. “He is a very active man, who was locked in a small room without any distractions, while the doctors specifically recommended that he walk to avoid a new clot. »

Correction
An error in the edition of the text entitled Hospital infections on the rise, published on Friday, led to the publication of an erroneous title. It was mentioned that more than 1000 patients a day get COVID-19 in the hospital. The reality is rather an average of more than 1,000 active cases per day, which is less. Our apologies.