There are names that are nostalgic … Motorola is one of them. A pioneer in mobile telephony, the brand has been navigating rough waters for fifteen years. After a brief period in Google’s fold, now, since 2014, it is in Lenovo’s pocket. At the end of 2021, the brand will come out of the woods renewing its Edge range. In the program, three new devices the Edge 20 Lite, the Edge 20 Pro and the Edge 20. It is the latter that we were able to have on hand for a few weeks. Offered at 499 euros in white or gray in a single configuration (8 GB of RAM / 128 GB of internal storage), it aims to compete with Xiaomi, Oppo, One Plus and Samsung in the mid-range market. So this successful comeback attempt? The answer in this test.

While most mid-range smartphones rarely go beyond the 6.4-inch form factor, the Edge 20 stands on its toes with its 6.7-inch screen and imposing dimensions (16.3 x 7, 6 mm). On the other hand, first surprise, not as thick as your build suggests as it is 0.7 mm thick. Good point. In order not to spoil anything, it also shows a featherweight, just 163 grams. Suddenly, unsurprisingly, the mobile shows excellent grip, be it during one-handed or two-handed use.

The aluminum chassis has a rather angular design that gives it a certain aesthetic maturity. At the back, the plastic back, imitation glass, is sober but of good quality, too bad they still have so many fingerprints. Especially since the stout photoblock does not help the dorsal aesthetics. Placed on a table, the three sensors make the smartphone wobble. This is not the only mobile we blame for an imposing photographic appendix, except that here it is quite obvious. 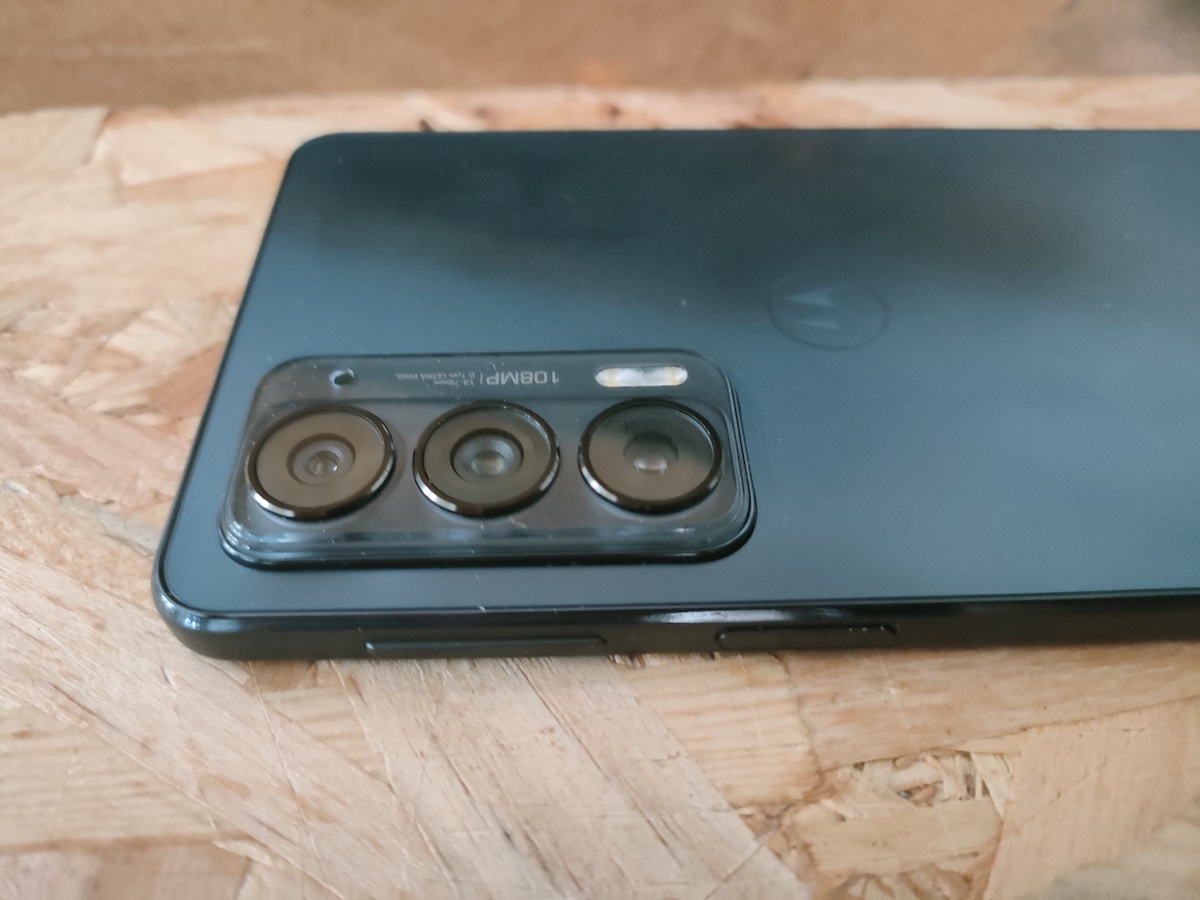 For the rest, it is quite common for this price range. Located on its edge, the fingerprint sensor is really sensitive, while 5G and Bluetooth 5.2 are in the game. Finally, although this Edge 20 does the economy of a cat, Motorola provides a USB-C adapter. It is increasingly rare and therefore honorable on the part of the manufacturer.

With its large 6.7-inch Full HD + OLED panel (1080 x 2400 pixels), this smartphone will delight fans of multimedia content of all kinds. What’s more, this screen pushes the limits of fluency a bit moreas it shows a maximum refresh rate of 144Hz, where most Android smartphones rarely go above 120Hz. To the untrained eye, the difference will still be minimal, let’s face it. Note that this frequency can be lowered to 60 Hz, to save battery life, or in automatic mode, so that the smartphone can define itself the frequency that best suits your activity. 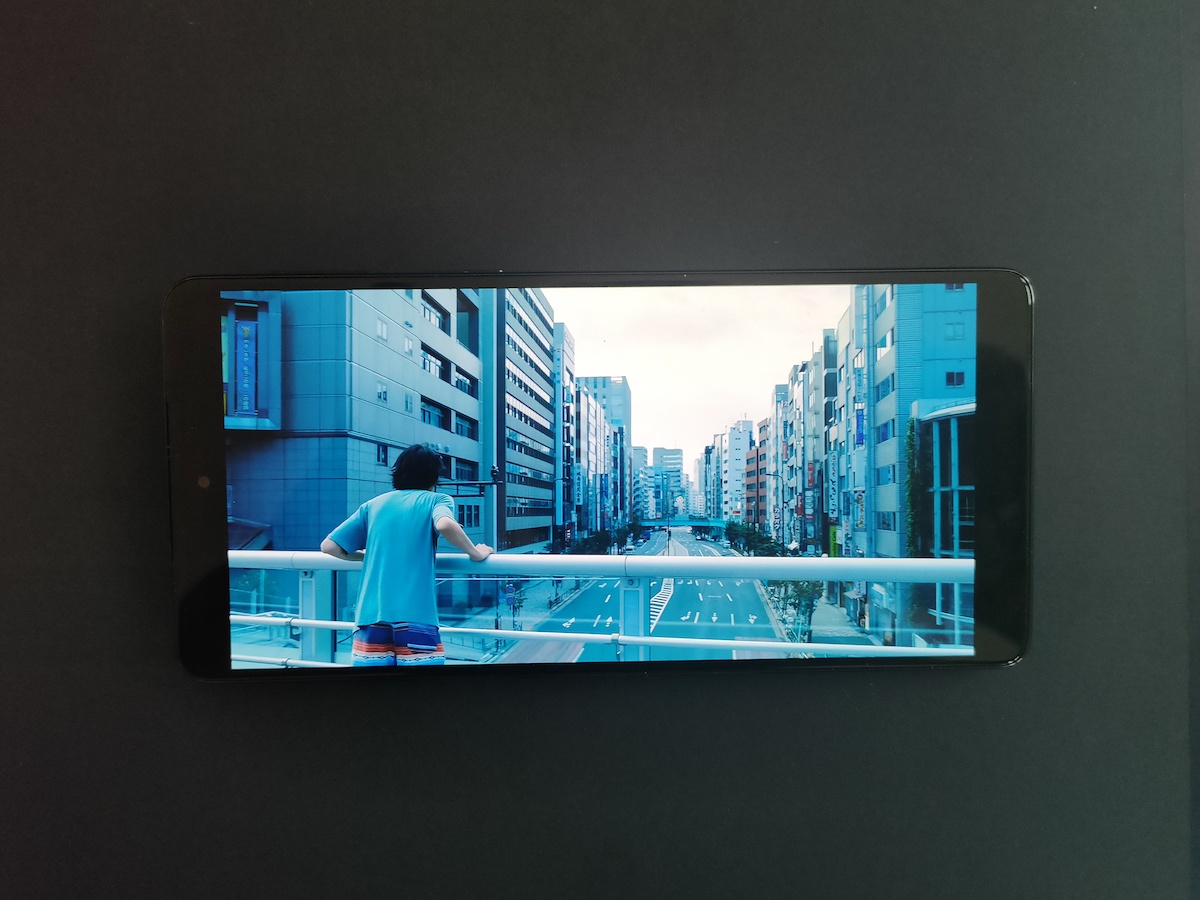 Regarding color rendering, we prefer to adopt the option “natural colors” in the options, which, in our opinion, does more honor to the OLED panel than the option “Saturated colors”. Also note, excellent maximum screen brightness allowing us to easily enjoy a Netflix series at night in our bed, with the lights off. And despite his speaker only, located at the bottom, the experience is still pleasant as the latter delivers a powerful sound without real distortion.

Armed with a Snapdragon 778G along with 8GB of RAM, this Edge 20 has there is no harm in responding to all uses. Extremely comfortable, it never goes out of the cold even during intense multitasking use, as evidenced by its good results during our various benchmarks. Even when it comes to video games, it keeps up. No slowdown or overheating will be observed after a good half hour of Asphalt 9 or Genshin Impact. The only downside is that the smartphone shows a 128GB storage capacity, not expandable. Therefore, after several months of use, we assume that you will need to regularly review the photos, videos, applications and other things that you download. 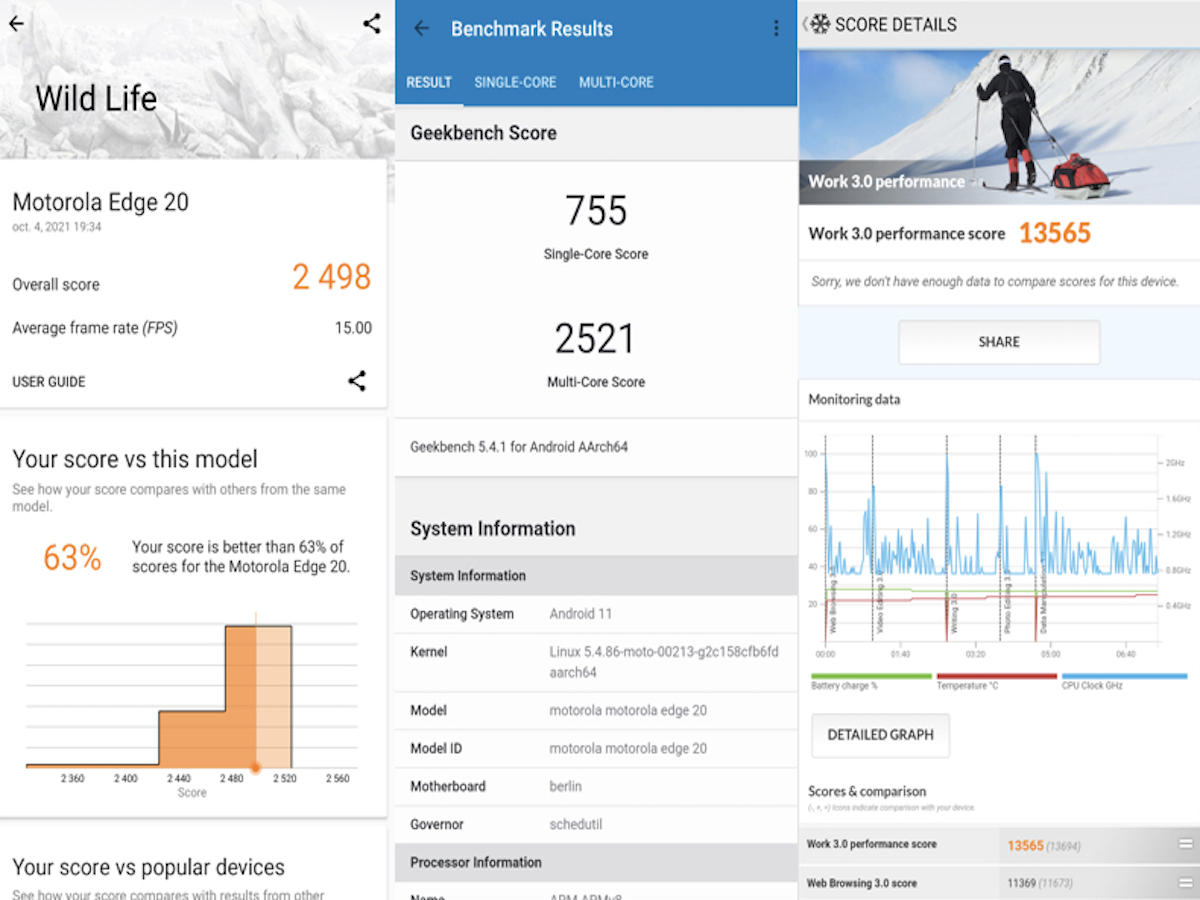 Delivered with Android 11, the Edge 20 runs under an overlay called “My UX.” The latter is refined and looks a lot like a Google Pixel. Personalization enthusiasts will delight in the dedicated “Motorola” app that offers many customization options. Special mention for the “attentive display” function that keeps the slab on when you look at it. Which is very useful when working.

During the unveiling of its Snapdragon 778G before the summer, Qualcomm proclaimed loud and clear that its SoC would be particularly energy efficient. The American company did not lie to us. Despite a “only” 4000 mAh battery, the Edge 20 shows excellent autonomy. During intensive use, the phone lasts for one day. Despite an hour on Netflix, half an hour of games, Spotify throughout the day and social networks in common, the smartphone showed 37% battery at night. While the refresh rate was constantly at 144Hz. A small feat. Unsurprisingly, when used more sparingly, the Edge 20 will stay out of a grip for nearly two full days.

However, despite its 30W charger, it will take a good hour to fully recharge – 57 minutes to be precise. In this field, it is neither the fastest nor the slowest. However, we expected better.

At the rear, the Edge 20 offers an impressive fleet. Namely, three sensors with more than convincing results.

Bluffing, this is the term that must be manipulated with the main sensor. Whether it’s during the day or early at night, the photos show an impressive level of detail and an astonishing handling of contrasts. Sharpness rarely fails, even if you quickly draw your phone for a photo, as is the case with this first photo. 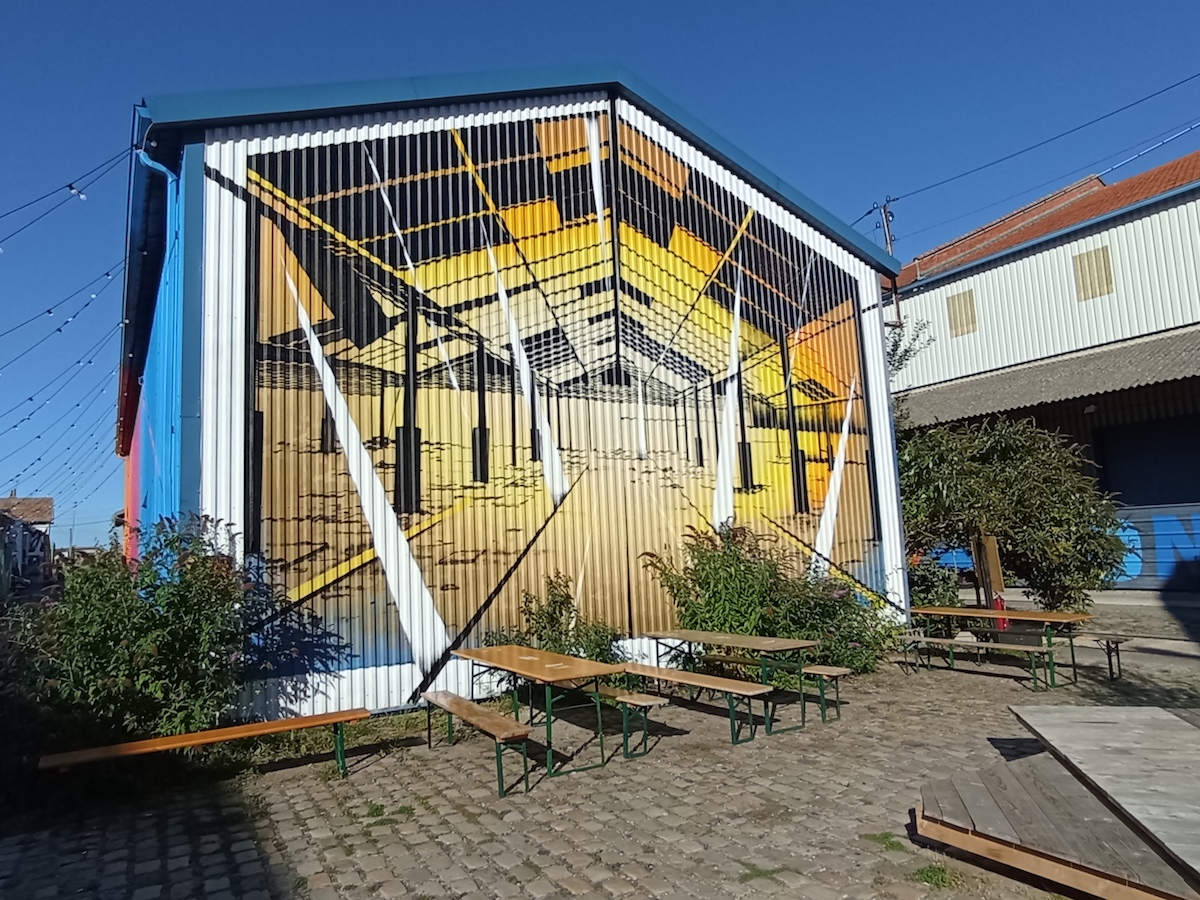 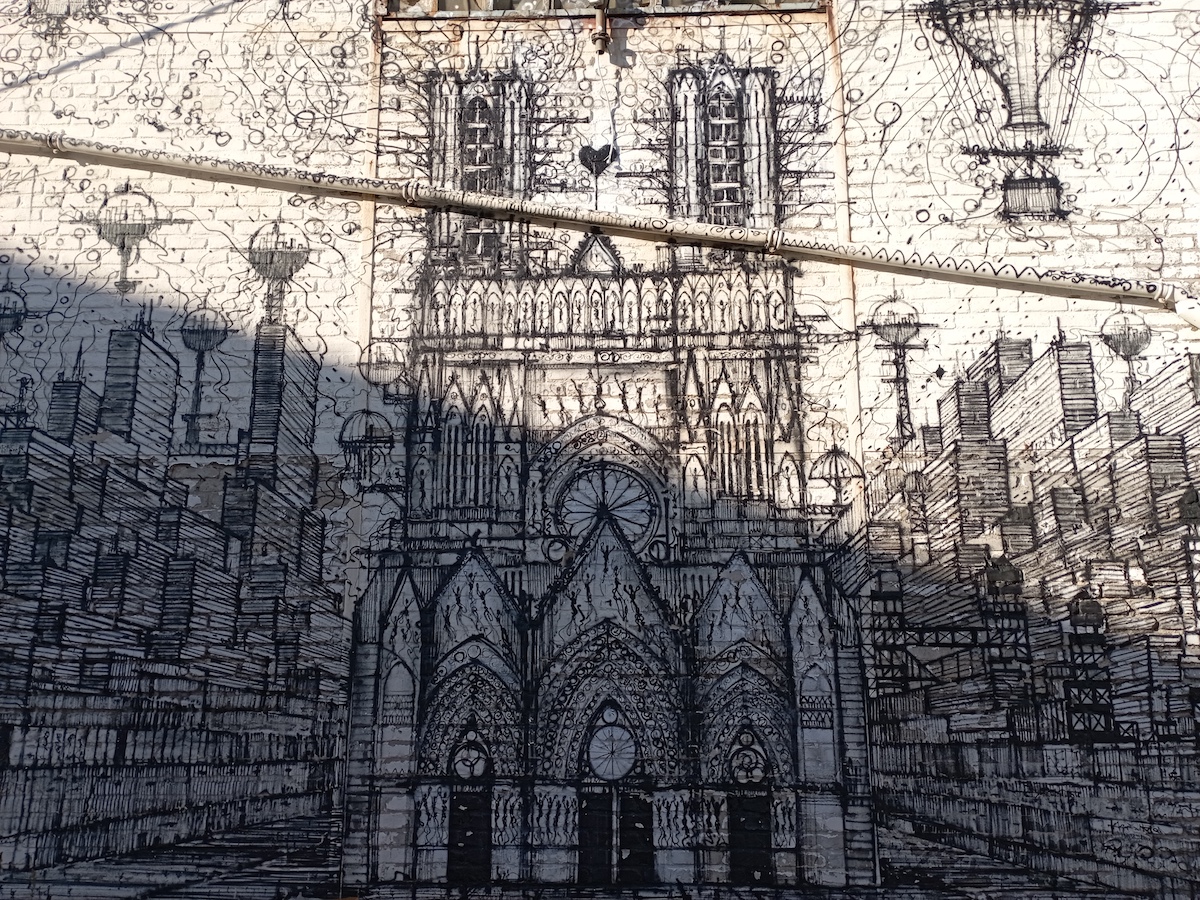 With the 108 megapixel mode, which will be activated in the options, the photos show a noticeably better colorimetry and a slightly more pronounced sharpness, especially when the light plays hide and seek. Therefore, we recommend that you use it especially if the weather is gray and gloomy. 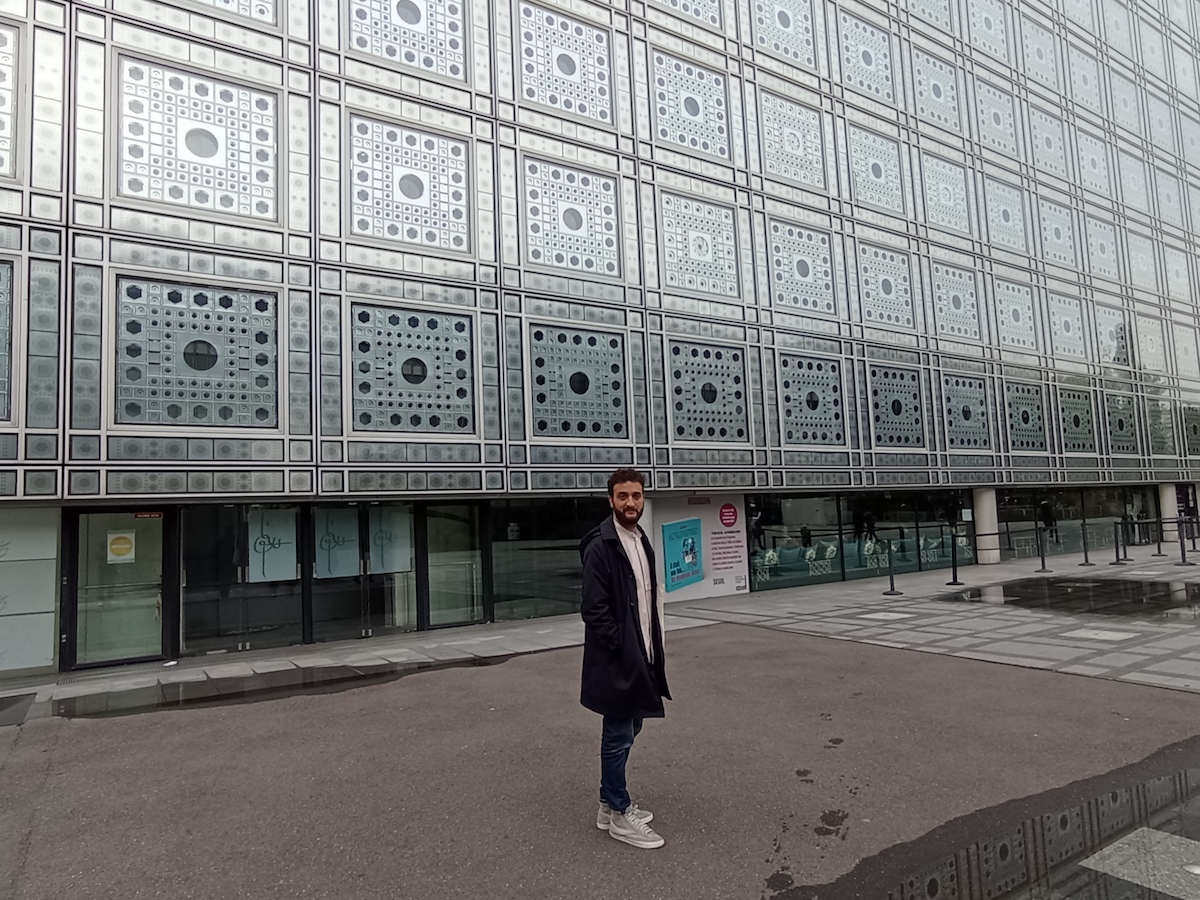 Honestly, the ultra-wide angle works well in bright conditions, but it delivers cooler colors as soon as the sky sets. Not surprisingly, smartphones under 500 euros are rare to fully master this type of lens. For its part, the x3 optical zoom allows you to get closer to a subject without losing precision. Quite rare in this price segment, this module, quite reserved for high-end smartphones, works well during the day, but will have to be forgotten at night. However, Motorola’s intention is commendable. 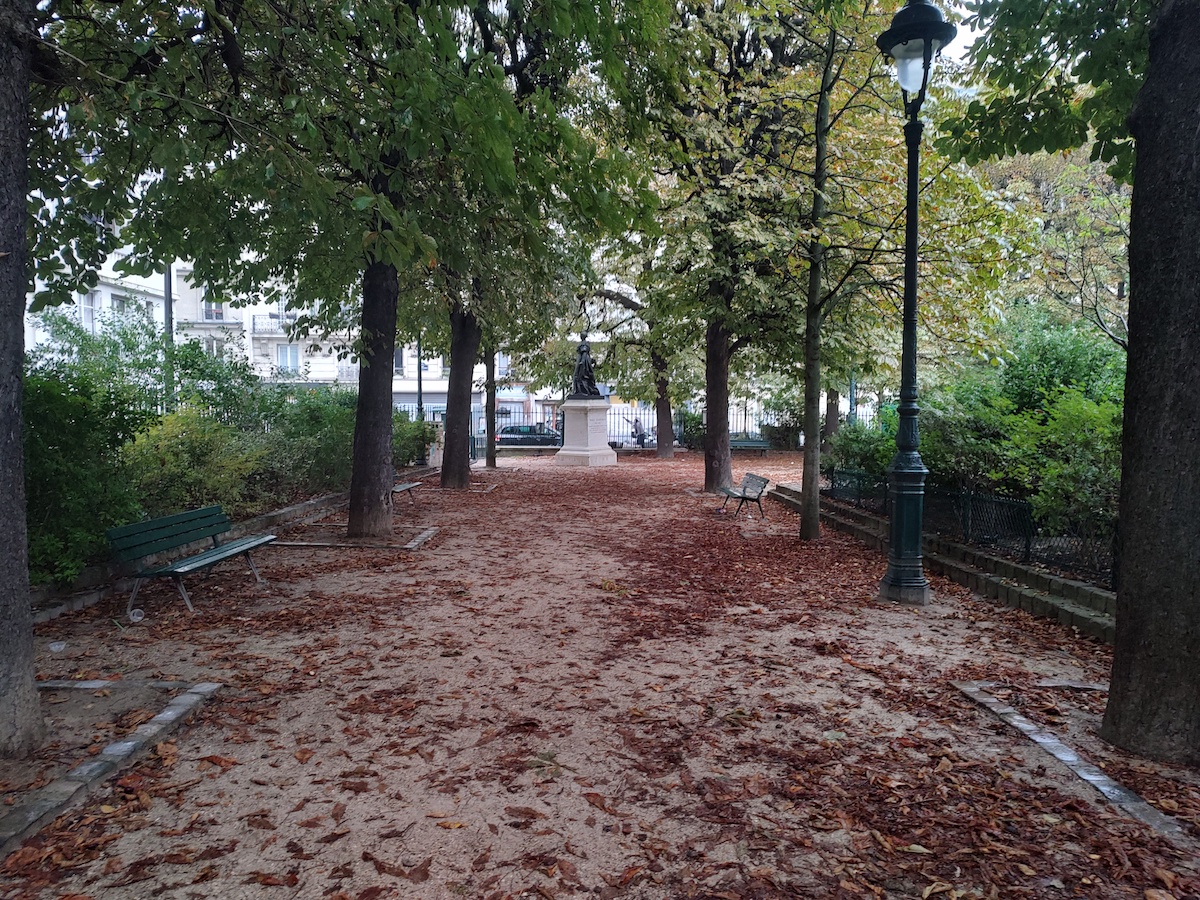 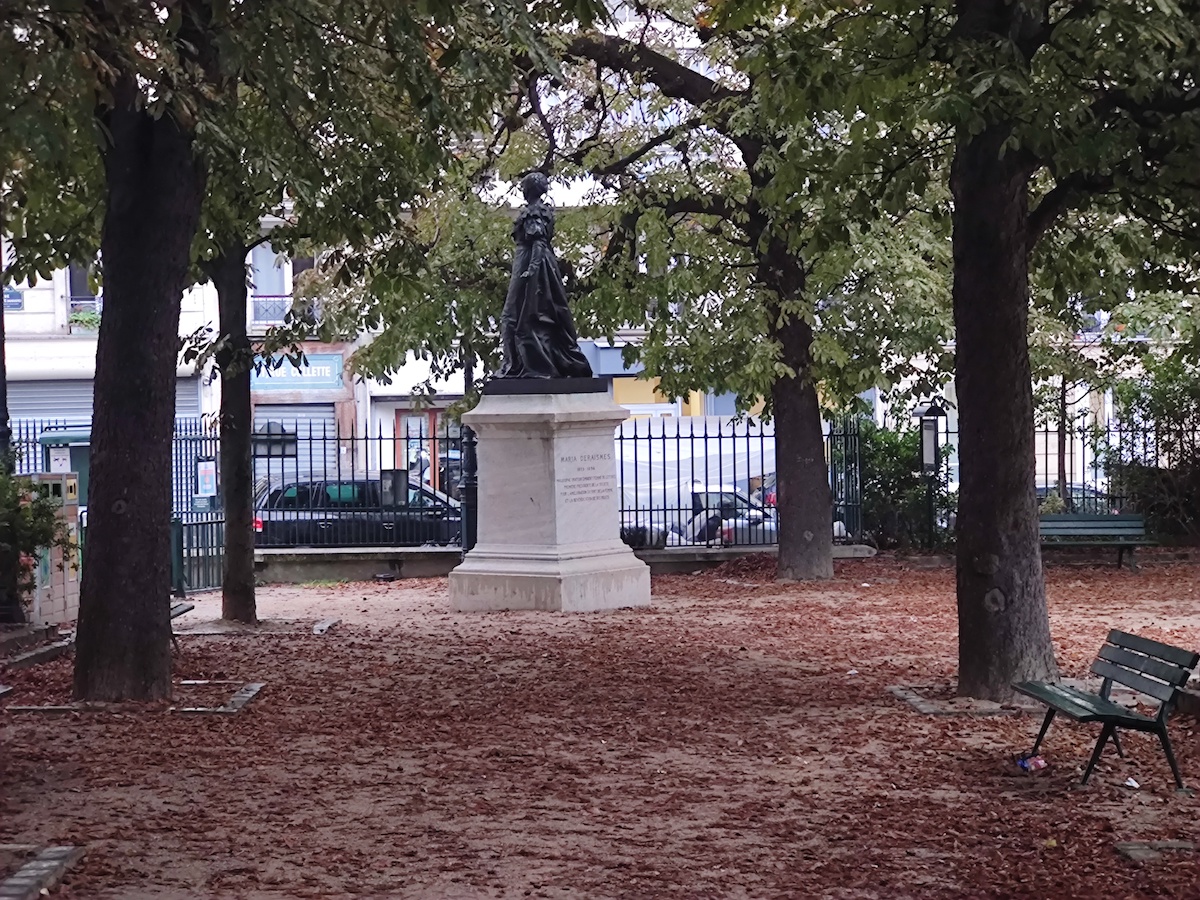 The “Night Vision” mode manages the lack of light and digital noise well, even if the rendering sometimes seems a little blurry in the contours of the photo. Sometimes it will be necessary to repeat it several times to have a really usable cliché, for example for social networks. Finally, there is nothing to complain about the excellent 32-megapixel front sensor that will delight lovers of selfies. 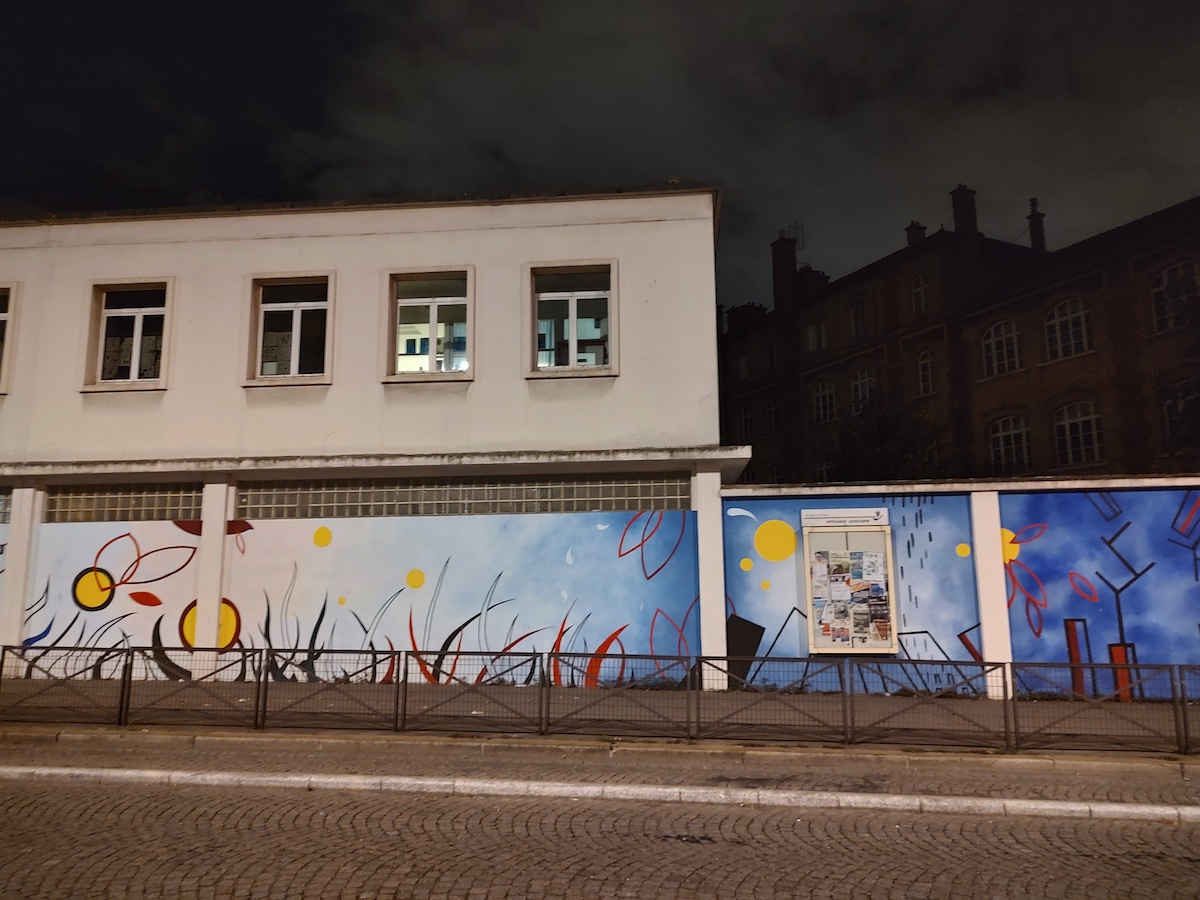 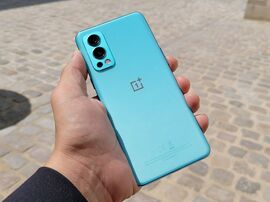 OnePlus impressed with its first North. A solid return of the brand to the mid-range market and a test transformed by this second generation. The OnePlus Nord 2 actually shows a very attractive datasheet with acceptable concessions. The OnePlus 9 series is in our opinion the most threatened by this smartphone that shares many of its characteristics but whose starting price is much lower: from € 719 and € 919.

Motorola returns through the front door with a smartphone that lives up to its ambitions. The Edge 20 is a perfectly balanced phone that will appeal to as many people as possible thanks to its winning trifold: a great screen, solid battery life, and a versatile photo module. Disappointing menus tarnish the whole, such as the absence of a micro SD slot and the IP67 / 68 certification (beware of the rain), the aesthetics and the recharge is far from fast. Nothing really bad, because the most important thing is not there. Motorola is back, so let’s not get mad.