The Motorola Razr is back again. The company has just announced a new version of its Razr foldable phone with a dual-lens main camera, a larger 6.7-inch display and a Qualcomm Snapdragon 8 Plus Gen 1 processor. The device will be available in China on August 11, right after Samsung launches. announced Galaxy Z Flip 4 and Galaxy Z Fold 4.

Motorola hasn’t announced pricing and has no plans to bring the 2022 Razr to markets other than China. Among the major improvements, the 2022 Razr has an improved dual camera setup that includes a 50MP main sensor and a 13MP ultra-wide camera. Recall that in the previous model, a 48 megapixel module was installed. The addition of a dual camera should help the Razr catch up with Samsung, given that the Z Flip 4 has both wide-angle and ultra-wide lenses.

The 2022 Razr’s screen has also been redesigned larger, up to 6.7 inches from its predecessor’s 6.2 inches. Therefore, it is the same size as the Samsung Galaxy Z Flip 4. The display on the lid is the same size as the previous generation Razr, with a diagonal of 2.7 inches, which is significantly larger than the Z Flip 4’s 1.9-inch external display. Motorola also says the Razr will come with a new Flex View feature that allows the phone to stand upright when folded – another feature that could help it catch up with Samsung’s foldable phone. 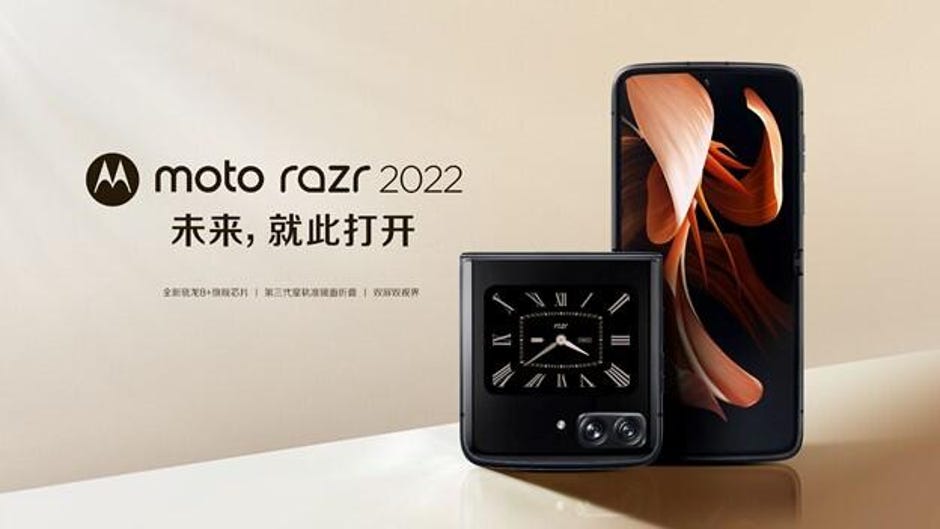 Foldable phones make up only a small fraction of the total smartphone market, but shipments are up sharply in 2021 compared to 2020. According to International Data Corporation, 7.1 million foldable smartphones were shipped in 2021, representing an increase of 264.3% compared to 2020. 2020.

Samsung currently leads the foldable phone market with 74% of the market in the first quarter of 2022, according to Display Supply Chain Consultants. But the release of the new Razr is another sign that companies want to challenge Samsung’s position. In addition to Motorola, there are rumors that companies such as Google, TCL and Oppo are developing new foldable devices.

According to 9to5Google, Google is developing a foldable Pixel, although a report from The Elec says it has been delayed. TCL developed a clamshell foldable device intended to compete with the Z Flip and Razr, but eventually discontinued the device. Since then, he has shown off new folding concepts with fold-out screens and 360-degree hinges. Oppo unveiled its full-size Find N late last year, and it looks like it’s also working on a foldable flip phone.

The new Razr looks like an updated version of its predecessor, designed to fix some of its shortcomings. Foldable phones are still relatively new, but the Razr 2022 and similar devices prove that manufacturers keep improving their designs.