Until now, you’ve had two options for expanding your laptop port: an inexpensive USB-C dongle, or a more powerful and expensive Thunderbolt dock. Slowly, a third option appears, trying to share the difference. The DisplayLink Dock (sometimes referred to as a USB-C Dock) uses data compression to provide Thunderbolt Dock capabilities over a standard USB-C cable.

USB-C hubs, Thunderbolt docking stations, and now DisplayLink docking stations have come about due to two factors: the growing proliferation of universal USB-C ports, and the realization by laptop manufacturers that they can use these ports to eliminate all dedicated HDMI, microUSB, slots. for SD cards and USB-A ports that can clutter up their laptops.

Traditional USB-C hubs and Thunderbolt docks vary in price, size, and available bandwidth. The latter factor has traditionally been the hallmark of the two products. A 10 Gb/s USB-C port simply doesn’t provide as much bandwidth as a 40 Gb/s Thunderbolt port, and the extra bandwidth can be allocated to more displays, ports, and more.

But the data compression offered by DisplayLink via the USB-C port puts less equipped laptops on a more equal footing. Basically, they allow you to add many of the features of a modern Thunderbolt laptop, even if you have an older laptop without Thunderbolt ports.

As such, DisplayLink docks provide some of the native features of a Thunderbolt dock, namely the ability to drive multiple high resolution displays. Due to internal bandwidth limitations, they are a good choice for office workers who may be using these additional displays for static applications such as email, chat, spreadsheets, or office work.

However, they have some fundamental limitations. First, DisplayLink docks are not meant to be used for gaming or controlling external GPUs. Both USB-C docks and Thunderbolt docks are also usually plug-and-play ready right out of the box. The DisplayLink dock requires software drivers to enable data compression, so you will need to download the appropriate DisplayLink software from the dock manufacturer. Unfortunately, the way DisplayLink interacts with your PC and GPU means that your Windows PC will occasionally experience glitches, such as the inability of devices like KVM switches and Powerline adapters to work properly.

The best USB-C hubs and dongles typically cost between $25 and $40. While a Thunderbolt travel dock can cost around $170, the best Thunderbolt docks typically cost $250 to $300 or so. That’s also the price range of recent DisplayLink docks like the Plugable UD-ULTC4K, which sells for $279. We haven’t tested cheap USB-C hubs that offer DisplayLink compression internally, though we’ll point you to some of them later in this story.

Buying a DisplayLink dock can also be a little confusing, as the term “DisplayLink dock” isn’t really in vogue. Instead, vendors sometimes use a “USB-C dock”. We usually think of a USB-C hub as part of a rapidly growing number of dongles connected by USB-C cable to a host computer. These dongles typically include multiple USB-A ports, a USB-C port for charging or further expansion, and often an HDMI or Ethernet port. We think the USB-C dock is a bigger device, possibly powered, with even more expandability. But these larger docking stations may not have the DisplayLink capabilities listed in the specs, or even offer them. You will need to shop carefully. 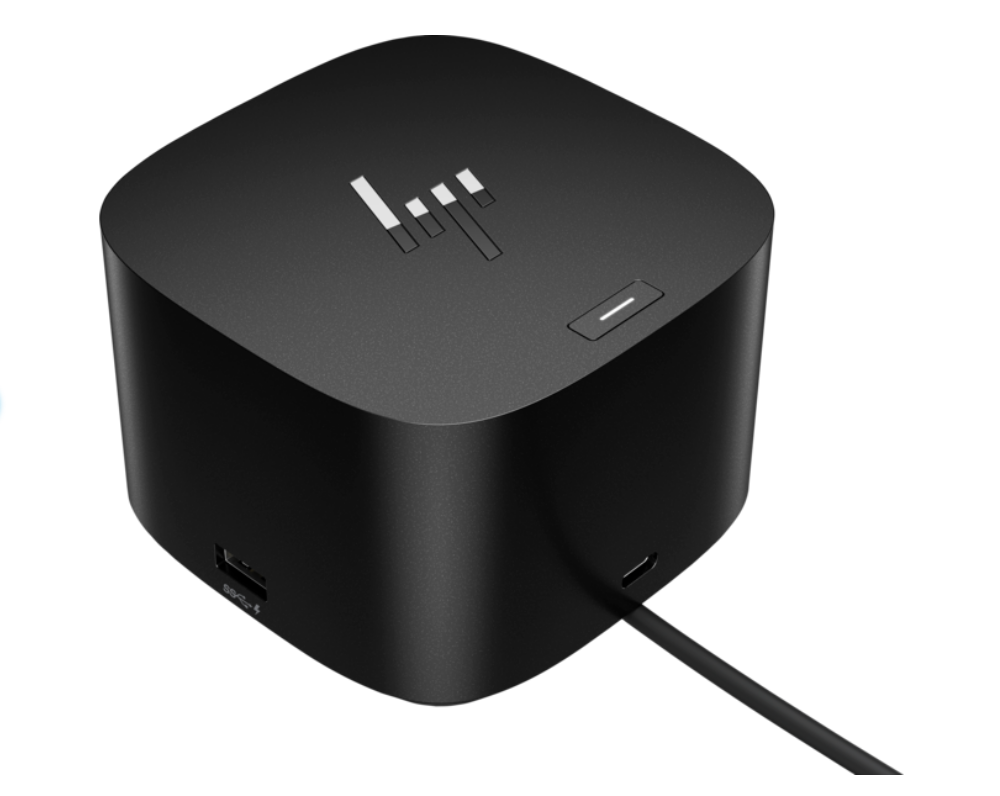 Plugable sent us one of their UD-ULTC4K USB-C docking stations for review. Technically, this is an update to the existing USB-C Triple 4K Display Docking Station (which has since been updated on the Amazon page), specifically offering a choice of DisplayPort 1.2 or HDMI 2.0 ports for each display – a luxury option. It comes with a standard 10 Gigabit USB-C cable and a 135W power adapter that can supply up to 95W to the host PC or 19.8W to the phone via the front USB-C port. On the front of the UD-ULTC4K you’ll also find an SD card and microphone and headphone jacks. The back of the Plugable has four 5Gb/s USB-A ports, a USB-C port for connecting to a host computer, a power cable, and an Ethernet jack. 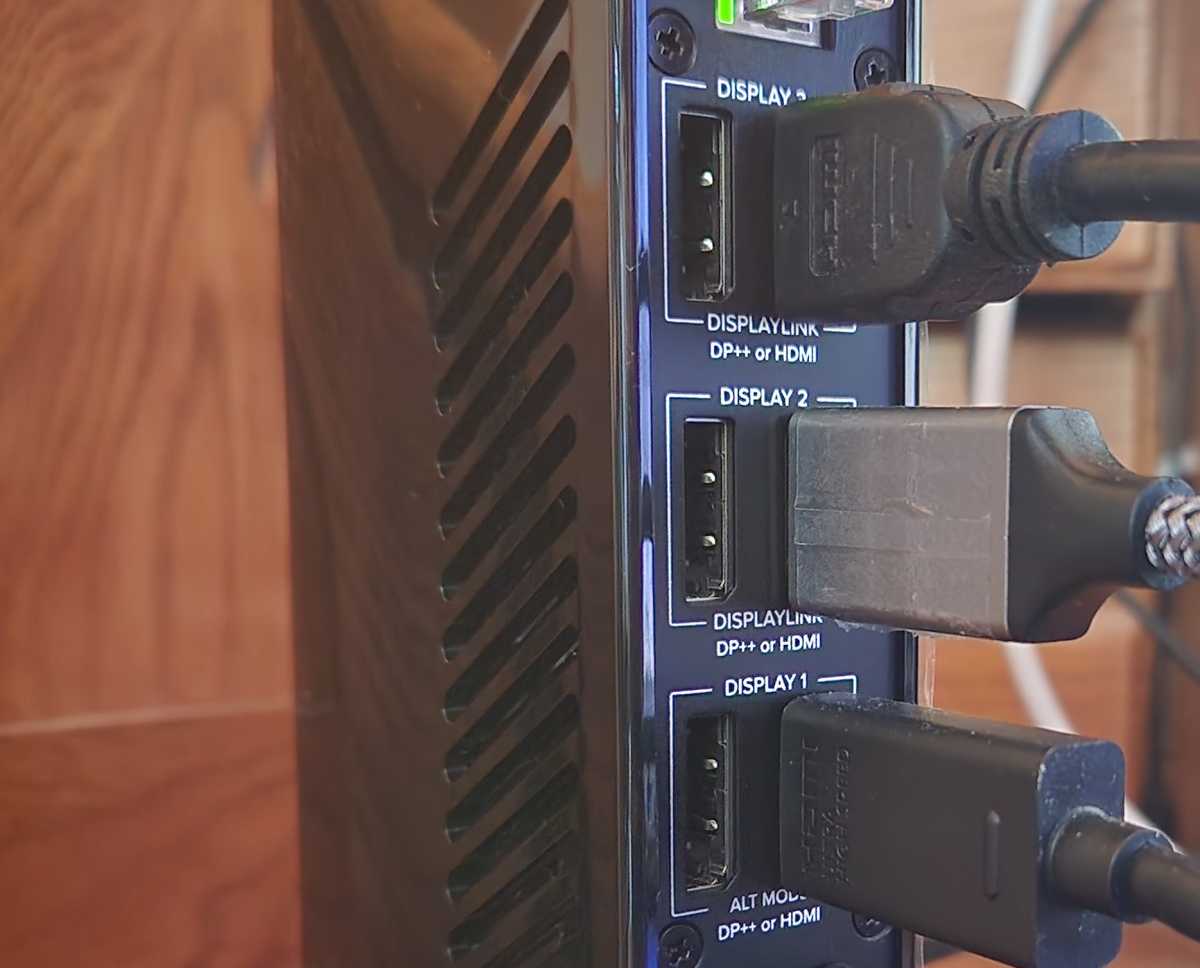 Unlike other Thunderbolt docks we’ve tested, the Plugable UD-ULTC4K not only highlights which port is which, but which I/O protocol each port is associated with. Notice the “Alt Mode” label on the bottom ports.

It is worth paying attention to the three HDMI/DisplayPort connectors. (By the way, DisplayPort, one of the display standards used to connect to a display, has nothing to do with DisplayLink.) Two of the three sets of HDMI/DP ports on the UD-ULTC4K use DisplayLink compression and are labeled as such. The third uses a laptop feature called DisplayPort Alt Mode to provide a better direct connection between your laptop and the display itself. (Unfortunately, the industry has done an absolutely terrible job of explaining which USB-C laptops support DP Alternate Mode and which don’t; however, chances are you have it.)

So why is it important? Because here the DP Alt Mode port is a “good port” and will connect to an external 4K display at 60Hz, which is more comfortable for your eyes. I connected a second 4K display via the DisplayLink port (using HDMI) and was only able to connect at 30Hz – OK for a secondary monitor, but the lower refresh rate can tire your eyes. Unfortunately I didn’t have a third 4K display on hand and instead I connected the dock to a 1080p (60Hz) display via the DisplayLink/HDMI port. It worked just fine.

The problem, as always, is the available bandwidth. While Thunderbolt provides 40 Gb/s bandwidth, DisplayLink must operate at 10 Gb/s. In some cases this matters; others do not at all.

PCWorld partially tests dongles, docks and hubs using a 4K 60Hz test video streamed from YouTube. But YouTube doesn’t always deliver what you ask for based on their knowledge of your hardware and how well it plays videos. YouTube only played “4K” videos at 1440p upscaled to near 4K quality. On the other hand, it only lost 35 frames out of 10,000. In the real world, YouTube delivers good quality videos with little to no stuttering.

The situation changed when I tried to copy a large set of files from an external hard drive over the same bus. All of a sudden, YouTube dropped frames like crazy – 1,223 out of 10,000 – and had to pause the video while it was catching up. The video quality is set to 1440p by default in the settings menu, but came out less. There was some noticeable stuttering – nothing special, but there was. However, protected content is played through Netflix.

We were explicitly told not to play the UD-ULTC4K, but we tried it anyway. We found what we would expect: mostly statically rendered games like Cities: Skylines played with absolutely no noticeable framerate drop, even at 4K. Total War: Shogun 2 played the same way. We didn’t test the latest first-person shooter on our budget laptop, but otherwise the UD-ULTC4K performed much better than expected.

You may see some reviews of DisplayLink USB-C docking stations that indicate that DisplayLink does not work well with discrete GPUs. This may be true, but when using two laptops – one with a discrete GPU (Microsoft Surface Laptop Studio) and one with integrated graphics (Microsoft Surface Laptop Go 2) – we saw no difference in performance. We also didn’t see any change in using the included standard USB-C cable versus replacing it with a dedicated Thunderbolt cable.

Should I Buy a DisplayLink USB-C Dock?

While we haven’t tested either the $89 GIQ USB-C hub or the $89 IVIIN USB-C hub, both of these DisplayLink hubs hit the sweet spot in terms of price. But the specs are a bit underpowered: the GIQ dock supports up to two 2048×1152 displays, while IVIIN claims one display will support 4K60 and the other at 2048×1152. This helps justify the price of the Plugable dock.

So what to do? If you’re an enthusiast who likes to study specs and accept the possibility that things might not work, DisplayLink offers the ability to expand your PC’s I/O capabilities even with non-Thunderbolt-capable hardware. If you don’t, feel free to fall back to the relative safety of a generic USB-C dongle or a powerful Thunderbolt dock: both offer simplicity and a familiar experience.