Nacon launches its second Xbox controller designed for Microsoft’s new consoles. Despite a more exclusive positioning, it struggles to convince in the face of better armed competition.

The Xbox Series S and Xbox Series X will soon celebrate their first anniversary. And, in recent months, we have seen how much third-party accessories have accompanied the two consoles. The proof with Nacon that, with the Revolution X Pro Controller, it is already on its second controller (after the Pro Compact most suitable for little hands). Here, the idea is to compete with products designed for demanding gamers, such as Microsoft’s Elite Series 2 or Scuf’s Instant Pro.

Unlike these two competing controllers, which are offered at an exciting price or even higher than 200 euros, the Revolution X Pro controller is offered around 100 euros, which still cuts the bill in half. This price difference is noticeable from the outset when we take the joystick in hand: we are far from the market benchmarks. Explanations

Unlike Scuf, Nacon wants to offer a different design with its controller designed for experts. We are there in general, in terms of proportion, but the Revolution X Pro Controller is more reminiscent of the Xbox 360 pad with its slightly hollowed top edge. However, Xbox gamers can rest assured, there is an articulated design around asymmetrical sticks (they are symmetrical on PlayStation controllers).

The Revolution X Pro controller relies on finishes that are slightly less qualitative than the basic Xbox controller. The slightly speckled plastic rendition is much less rewarding, and some cuts lack care. We found a grip that overflows easily at the front, which gives the controller a slightly more aggressive look. It contrasts with the large round keys adorned with the letters ABXY, Nacon’s trademark.

Good point: the Revolution X Pro Controller comes in a very rigid carrying case, which allows you to store all the accessories that come with it (fabric, customization parts, and power cord). Note that the controller is only wired, which is sure to make purists say that a physical connection is better than no cable. The supplied braided cable is 3 meters long, giving you enough freedom when playing games in the living room. 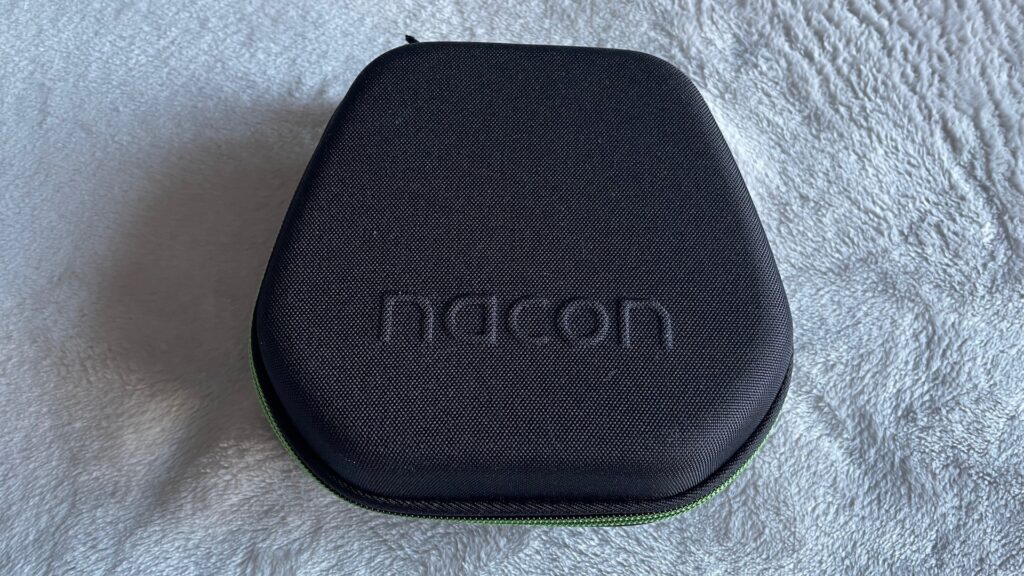 Some convincing points and some less

Overall, the ergonomics of the Revolution X Pro controller are satisfactory. The keys respond well, the triggers respond very well and the directional cross is more flexible than that of the official control (we hear less the “click”, although it is a matter of taste). On the other hand, there are points where the accessory is less convincing, especially on the side of the placement of certain keys. The edge buttons, RB and LB, are less accessible (you have to squeeze your index finger a little more), while the four shortcuts on the back, and configurable, are not very comfortable.

S1 and S3, placed more indoors, perform slightly better than S2 and S4. To convince in use, they would have to be a bit more player-oriented. As these shortcuts are not optimally placed, the Revolution X Pro Controller loses an argument compared to the classic pad (which it doesn’t, as a reminder).

Also, Nacon could have measured his grip more, which is a bit too abrasive for the palms (read: scratch a bit more).

Revolution X Pro controller specificity: it is possible to weigh it with the small weights provided, to place on each of the handles. Basically the pad weighs 232 grams, but you can go up to 264 grams in a few seconds. 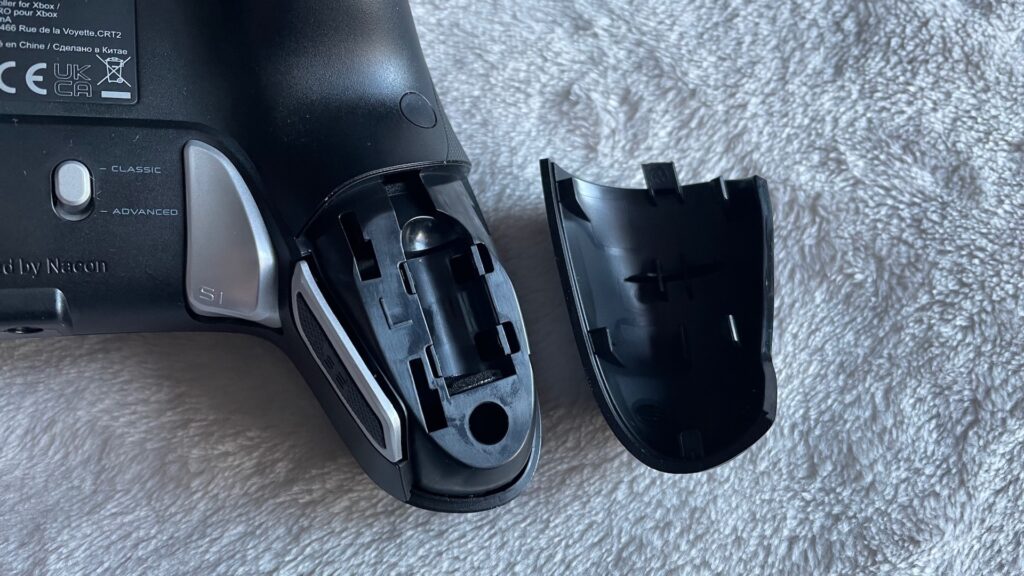 The compartment for modifying the weight of the Nacon Revolution X Pro controller. // Maxime Claudel for Numerama

A goldmine for customization

In addition to the weight, you can change the clubs:

Be careful, you have to pull very hard on the stick to get it out, which is not very practical (you always think you’re going to pull too hard). Here again we see an approach by Nacon, which is unforgivable for a positioning based on demand. We prefer Microsoft’s magnetic solution, which has proven its worth in the Elite Series 2. 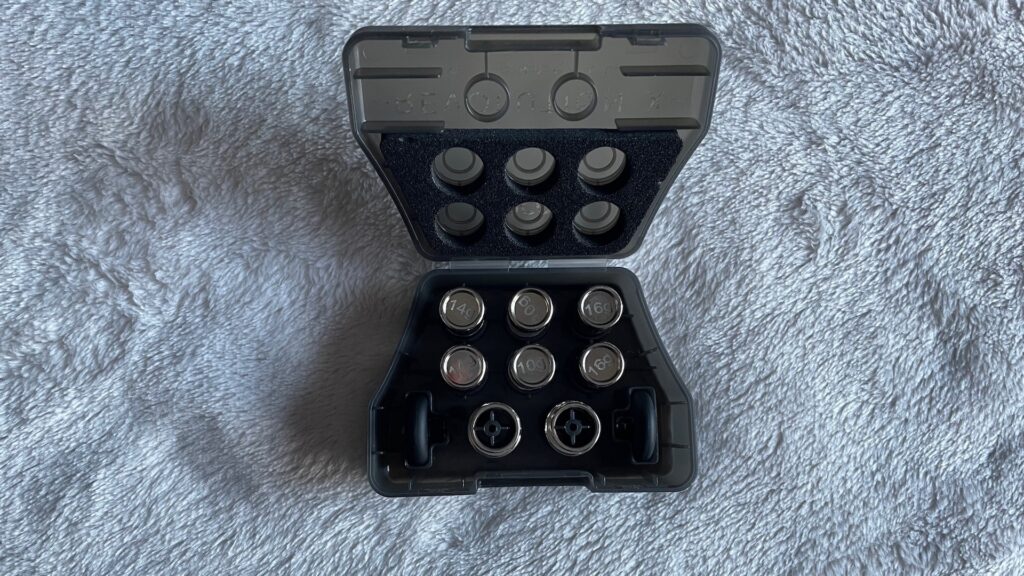 The Revolution X Pro controller is based on two modes of use: Classic and Advanced. Classic mode lets you quickly assign commands to the shortcuts on the back (without going through an app). It corresponds to a single profile, which we will want versatile.

To go further, it will be necessary to go through the Revolution-X application. Free, it’s available on Windows and, good news, on the Xbox console. Very complete, it allows you to create as many profiles as you want, with a multitude of available parameters (shooting dead zones, vibrations, etc.). Then just load up to four into the controller to switch from one to the other with a simple tap. Here, the idea will be to imagine four configurations for so many genres.

Finally, Nacon provides a Dolby Atmos license with its controller, which will allow you to enjoy the best sound reproduction by connecting headphones to the jack port.

The Revolution X Pro controller has two problems that are difficult to fix: the excellence of the standard Xbox controller, which is cheaper, and the excellence of the more professional controllers, which certainly cost more. With its pricing positioning sandwiched between these two extremes, the Nacon-designed product will have a hard time finding its audience. The least demanding will not see the point of putting 50 euros more, while the most demanding will prefer to rely on references, which are much more convincing.

Especially since the Revolution X Pro Controller’s few specifics sometimes go awry in execution: the shortcuts are misplaced, the ergonomics of the interchangeable sticks need to be rethought, and the grip deserves to be reworked. In absolute terms, it is not a bad product. But the competition is tough.

Photo credit of the one:
Maxime Claudel for Numerama