If the prospect of seeing a man set foot on Mars is still very far away, NASA is actively preparing for it. The space agency has flight-tested a new inflatable heat shield that could be a key part of the landing system for a crew-landing ship on the Red Planet.

Dubbed Loftid (Low Earth Orbit Inflatable Moderator Test), this heat shield is capable of slowing down and protecting a payload, such as a rover or astronauts in a spacecraft, as it descends through the planet’s atmosphere. To test Loftid on Earth, NASA sent it into space aboard a United Launch Alliance (ULA) Atlas V rocket that launched from California.

The main mission of the rocket was to put a meteorological satellite into orbit, but Loftid was on his way. While still in space, the shield assumed a conical shape. In Loftid’s unflattering description, NASA refers to “a stack of orange cameras covered in black tarps.” A simplified depiction that does not take into account the advanced materials used to withstand space conditions and the extreme heat of re-entry.

Loftid fell to Earth at a speed of almost 29,000 km / h or 8 km per second. The ULA tweeted a video of the shield detaching as it begins to descend.

NASA has shared a video showing the final phase of the parachute descent before landing off the coast of Hawaii.

The advantage of such an inflatable heat shield is that it can be compressed when transported over long distances and still take up little space. The size of current rigid shields (such as the one used for the Perseverance rover) is limited by the capacity of the rockets.

The inflatable shield will create more drag as it enters the Martian atmosphere, a process NASA likens to a “giant brake”. This means that Loftid can drop larger and heavier payloads onto the Martian surface. 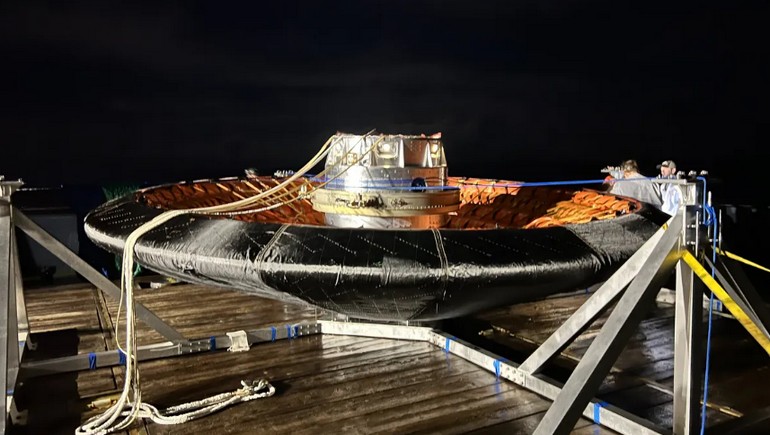 The rescue team pulled Loftid out of the water. The inflatable shell has a diameter of about six meters. ULA

NASA will now analyze the performance of the heat shield using sensor and camera data. This information will allow the development of future versions of the concept.