The emptying stations of robotic vacuum cleaners are becoming more and more democratic and we see more and more models flourishing with this system that allows the user to avoid permanently emptying the dust container on board. A very appreciable time saving that reinforces a little more the interest of having this type of product at home to support us in the task of vacuuming the floors.

This is all the more true when the prices are much lower, the competition forces. This is the case with this model proposed by Neabot, the Nomo N1, which is also found under the trade name Neabot N1. At 399 euros, we arrive at a price level identical or even lower than certain models that do not have a discharge station. For that price, is it a good deal?

When unpacking, there is not much to say about the accessories provided. The device is delivered ready for use with its side brushes installed, and two spare ones, the same for the filter with an additional model, and two dust bags to replace the one already placed in the emptying station.

The remote control is a good surprise for those who are allergic to connected objects. Thanks to its multiple buttons, they can use almost all the functions of the vacuum cleaner, in addition to the programming and management of zones, and other virtual barriers that require mapping.

The dump station is not the most imposing we have tested and it is rather a good point. It will stick to the wall without difficulty, even if there is a gap missing to accommodate the length of the cable which may be too long. However, the risk is limited because, at 1.20 meters, it is precisely a little short to reach the closest plug in our test environment. An extension cord will do. 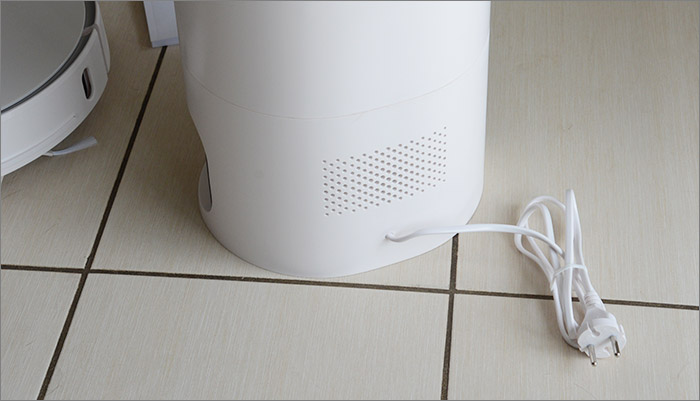 The connectors will allow the Neabot N1 to recharge from the front of the device. There is also the hole that will handle the evacuation. 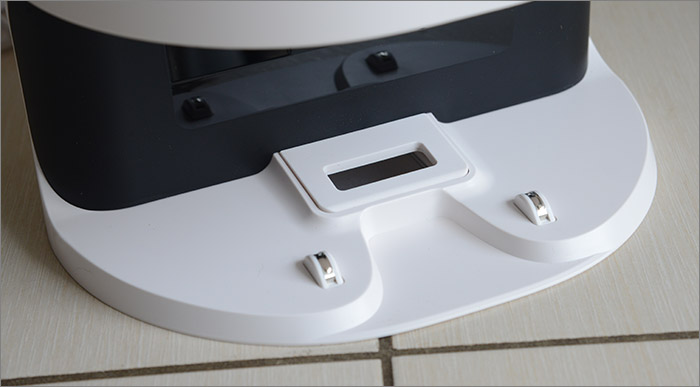 The hood is not locked and just pops up. A recovery bag is already in place, its replacement is very simple. As of this writing, the replacement pockets and other accessories are available for sale on Amazon. 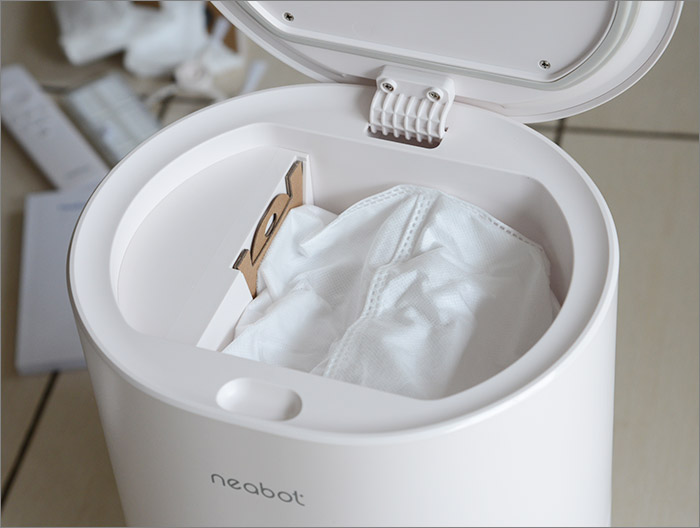 The robot has a very classic circular shape. The buttons on the device are used to activate start-up, return to station, or zone clearing. The latter will order the robot to clean in the place where it is placed in a square measuring 1.60 meters on a side. 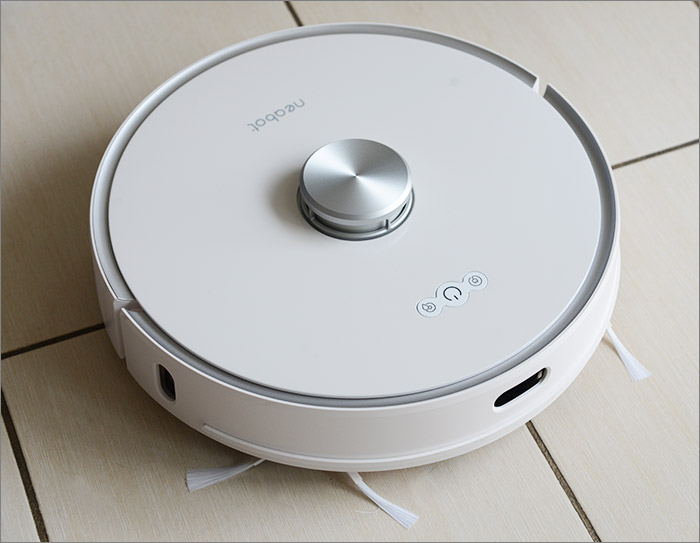 Underneath the appliance, the two side brushes will be used to return the powder to the main brush. This is removable for regular cleaning or to release threads, hair or hair that may have lodged there. 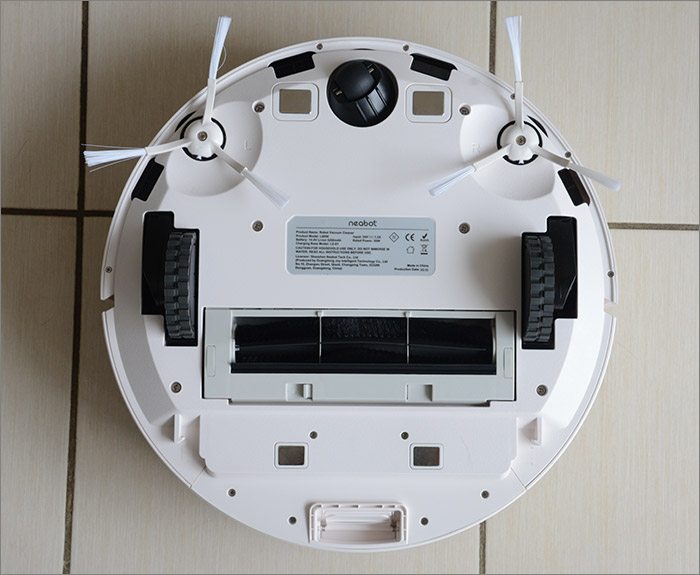 The dust container offers a standard capacity and is easy to remove. Even with the emptying station it will be necessary to remove it from time to time to clean the Hepa filter housed there. 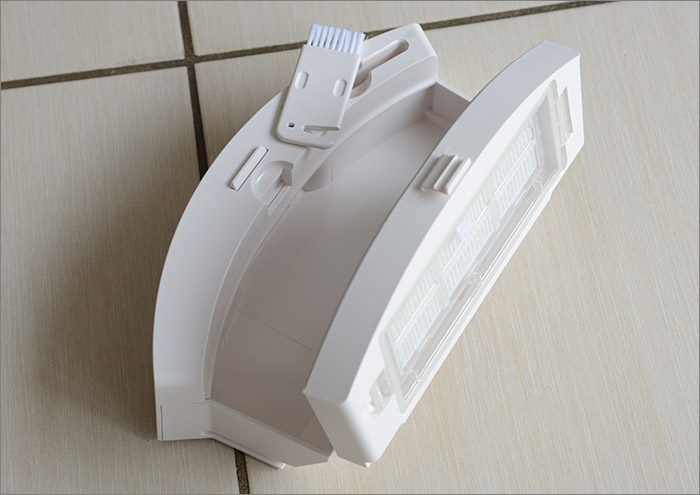 We have seen that it was possible to use our Neabot NoMo N1 without having to use the application, but this would be depriving us of the options available in the application. This is called Neabot Home. There is also an app simply called “Neabot”, but it seems intended for models without a dump station. So we install Neabot Home.

Registration for Neabot services is mandatory, with verification of email address. The wizard guides us to configure the device in the application, in particular to connect to the device’s WiFi and tell it the password for our home network.

The operation is quite fast. The main interface does not show a map yet, as at least a full first pass is required. In the options, however, we can already see that it is possible to configure the suction power, set the intermediate one by default, or even ask our robot to speak French. 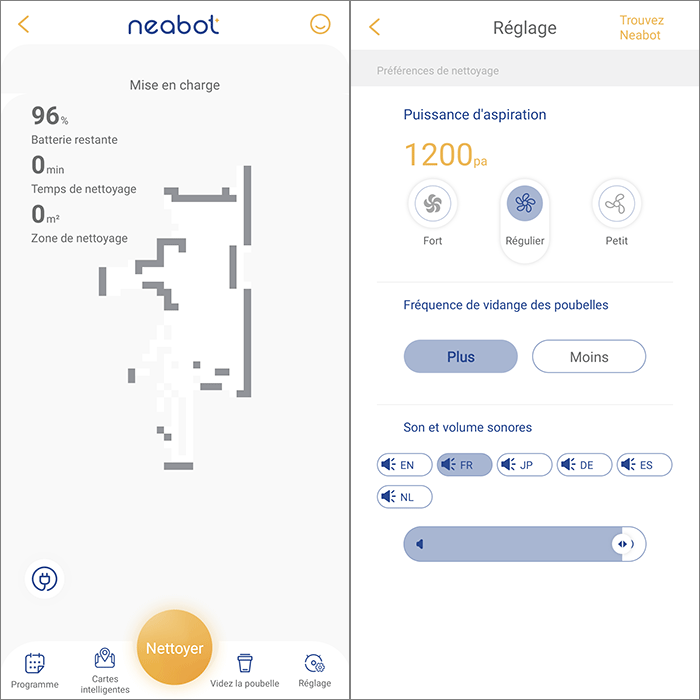 So far we have not encountered any difficulties and the material appears to be of good quality, with a robot with two brushes and a satisfactory number of accessories. Now we have to start the mapping and put the Neabot N1 to the test in our test environment.

During the first pass, the Neabot Nomo N1 hesitates a bit, and this is usually the case with most robots when they perform their first mapping. This is the opportunity to observe it in the face of our usual obstacles. The first trap is the one where everyone is breaking their teeth and the N1 is no exception. You will need to configure a virtual barrier.

On the other hand, it is impeccable when passing the railing of the window. More imposing than a simple sill bar, it takes power and well-designed wheels to keep from jamming – a formality for the Neabot that has never been stuck, even when crossing at an angle.

The mark indicates that our robot vacuum cleaner is capable of detecting carpets. However, it is the first manufacturer to indicate this characteristic without managing to increase its suction power. This can be a problem for owners of mixed floors, unless the maximum power is chosen in the application throughout the vacuum, to the detriment of autonomy and noise. 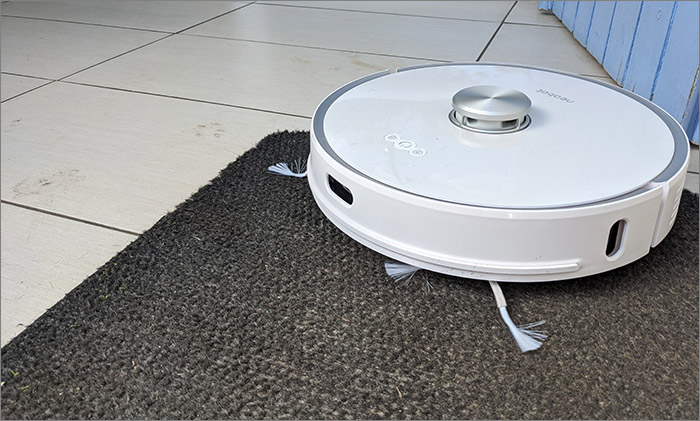 Table legs and other obstacles were no problem for him and he deftly adapted by circling objects as closely as possible to collect as much dust as possible. The presence of two brushes helps to spread the clean surface by removing dust.

When you know which way to go, the Neabot Nomo has good speed. Despite this, he managed to avoid falling at the top of a ladder, but then remained blocked during his U-turn, the sensor found itself above the void. It will require manual intervention and post-configuration of a virtual barrier.

Once its work is finished, the robot returns to the station it finds without difficulty, goes into reverse to empty, then returns to the loading position. All the hairs were properly emptied at the recovery station, only a few grains of sand and dirt were left in place. We did not hold it against it, our test floor was very dirty and these elements were burdened with moisture. 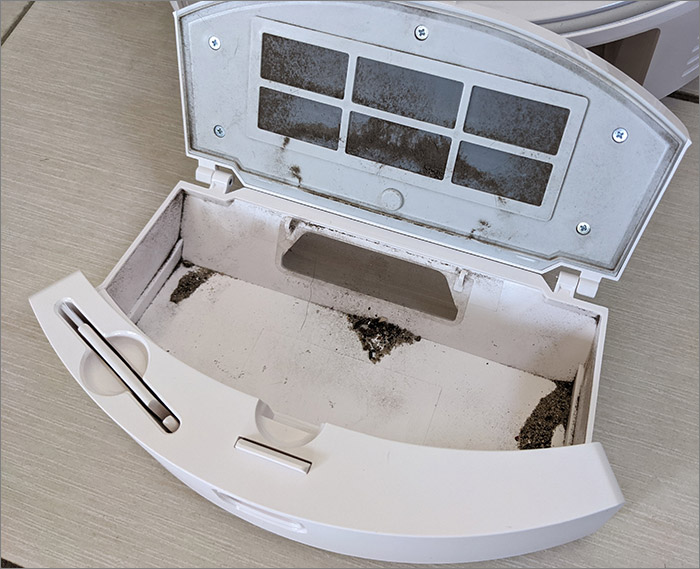 The first passage was a bit long and a bit messy in terms of navigation, as we can see from the follow-up. 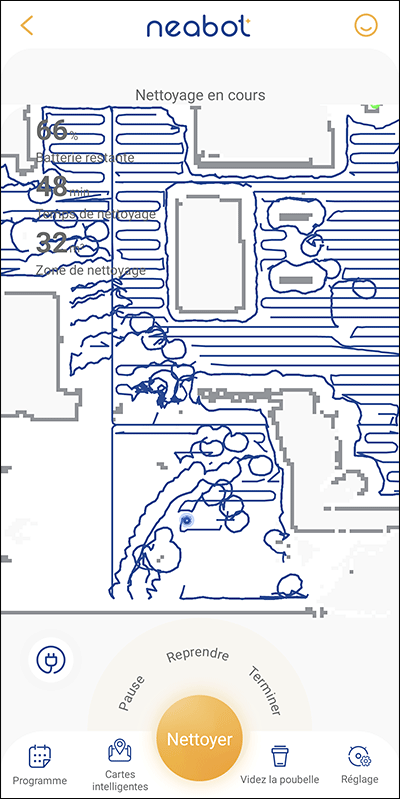 Before relaunching the robot for the second time, now that it knows our home, we put up barriers and cut into pieces. We regret that we cannot choose between various forms of virtual barrier and areas to avoid. Also, the application does not offer automatic part cutting like other models. Manipulations are more dangerous. 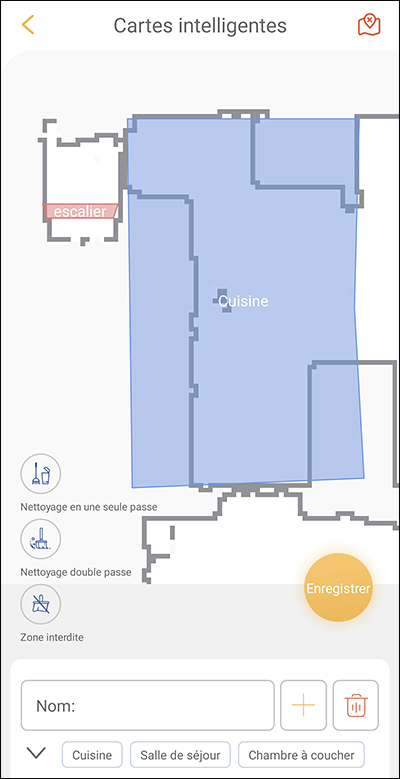 During the second pass, the robot showed more speed and did not hesitate to follow a more orderly path. It also respected the barriers and room boundaries that we had set up. 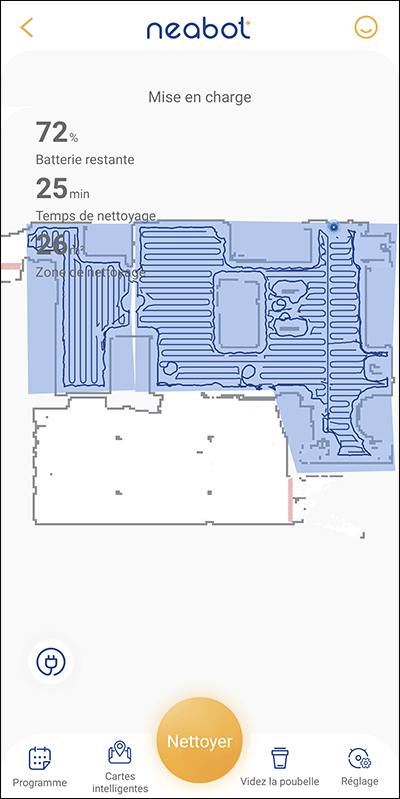 The Neabot Nomo M1 looks a lot like another model we tested: the Ultenic T10 with which it shares many good and bad points. However, it is a bit cheaper. On the other hand, even if it costs 100 euros less, it does less well than the Proscenic M8 Pro, which has good surface recognition and better mapping. The N1 also exists with a mop version for a handful of euros more. But this arranged, you will be content to freshen the floor rather than wash. If your cleaning needs include washing floors, you will have to resort to a model like the Ecovas Deebot T9 + with its oscillating mop.

Another alternative, preferable if you have mixed floors with parquet or tiles and areas of carpets and carpets, the Roborock S7 that lifts your vibrating mop and that can also be used with an automatic emptying station.

Therefore, the defects of the T1 are found in the N1 and reveal a less expensive design with translations and a perfectible interface in terms of options and mapping. We also regret that carpet detection, although noted as a feature, does not appear to have any effect on reality.

It is sold at about 400 euros, however, it is not ruled out if you are looking for a model with a recuperator. Its use is simple, and it can even be operated with just the remote control, which makes it a good option for those who are allergic to smartphones. On the other hand, it is agile and will know how to sneak around to vacuum, avoiding the task of cleaning the integrated dust container with each pass. A good value for money for those who do not want to invest more in this type of machine.