The new Nest Wifi Pro Mesh Router features a clean look and is compatible with some of the latest technologies such as Wi-Fi 6E and Matter. However, if you already have a mesh network at home, it probably won’t need to be replaced.

What is a mesh network?

A mesh network is a technology for distributing multiple routers, those devices that create Wi-Fi networks, in your home. Compared to ISP modem routers, where network quality decreases as you move away from a single router, mesh networks increase Wi-Fi coverage and ensure that connected devices, such as your phone, are always connected to the nearest router. They are usually sold in two or three terminals (as was the set tested here), but they can also be purchased individually.

>> Read also: How to choose a Wi-Fi router or mesh network

If your internet seems to be slow at home, at least slower than it should be compared to your internet plan, this is probably the best speed boost solution.

First, this is the first Google router to use the Wi-Fi 6E protocol. Until now, Wi-Fi networks have used two different types of signals: the 2.4 GHz Wi-Fi band (waves that have a long range but allow low transmission speeds) and the 5 GHz Wi-Fi band (which have a shorter range). ). , but achieve higher speeds).

For the first time, Wi-Fi 6E adds a third band: the 6 GHz band. Without going into technical details, let’s say that this is similar to the 5GHz band, but since fewer devices use it, it should be possible to achieve higher speeds, especially on crowded networks. It’s a bit like Wi-Fi 6E adds a new backbone to your network, and that road has several dedicated high-speed lanes.

Another new technology in the Nest Wifi Pro is the Matter smart home protocol. The router can be used as a controller for all your connected objects. However, this feature will be included in a future update, so I didn’t have a chance to try it out.

>> Read also: Connected Homes: What you need to know about Matter

However, in my opinion, the Nest Wifi Pro’s greatest strength lies not in new technologies, but in design. If you do not look closely and turn off the indicator light, then the device really looks like a small vase. If we manage to hide the wires, the router becomes almost a decorative item (in Canada it is also offered in two different colors).

The appearance of the router does not matter. The prettier the device, the less likely you are to hide it, which in turn should improve its performance as Wi-Fi waves lose power as they travel through walls and furniture.

Appearance is obviously a subjective quality and probably not everyone will like the look of the Nest Wifi Pro. Up close, you can also quickly see that the case is made of plastic. The router, in my opinion, is much prettier than the average, but not a work of art either! 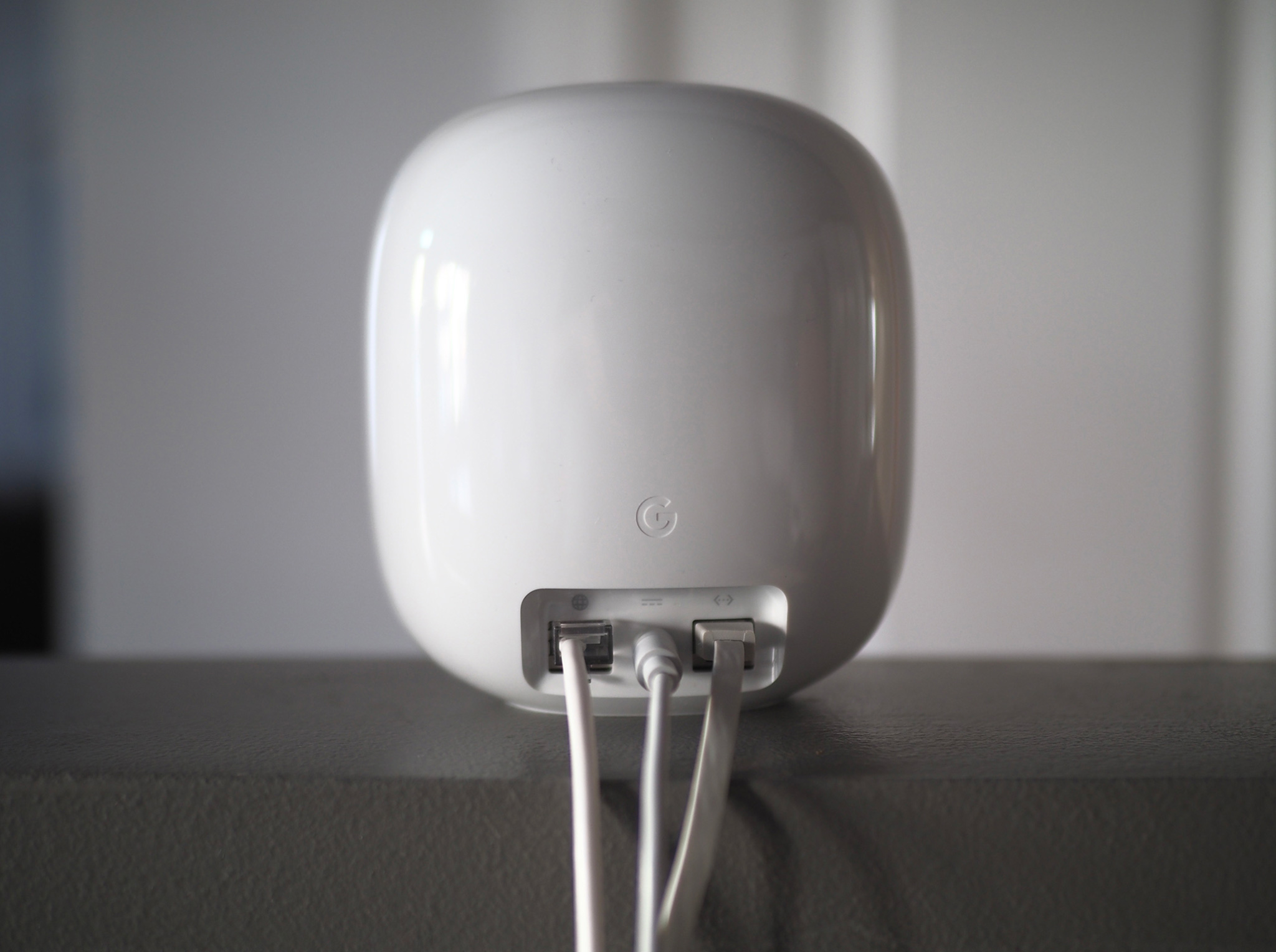 In order to properly test the Nest Wifi Pro, I upgraded my internet plan from 120 Mbps to 940 Mbps. My old speed would not be enough to easily test the impact of the new network.

I ran various tests with a traditional router (equivalent to an ISP router), with a Wi-Fi 6 router mesh system (TP-Link Deco X60), and with a Nest Wifi Pro. I did the first speed test in my office where the internet signal goes to my house and then another one in my living room. All tests were repeated multiple times on iPhone 14 Pro (Wi-Fi 6 compliant) and Pixel 7 Pro (Wi-Fi 6E compliant).

In summary, here are my observations: in the office, the results are excellent. The Google Pixel 7 Pro on the Nest Wifi Pro 6GHz band was the only one that was able to max out my internet plan (940Mbps), but other router and phone combinations were able to get decent speeds, from 550Mbps to 750Mbps . from approx.

However, further into the apartment the result was different. The Nest Wifi Pro was able to get 450 Mbps, while the X60 was limited to 200-250 Mbps, which is an acceptable speed. The service provider’s router was much slower, at 30 Mbps.

Another observation: The Nest Wifi Pro makes very little use of the 6GHz band to connect to compatible phones and computers. In fact, this one is specifically designed to provide communication between the various terminals of the system in the apartment.

Also note that it would be possible to improve the performance of the Nest Wifi Pro by connecting different routers with ethernet cables. Each charging station has two 1Gbps Ethernet ports. They are usually used to connect certain devices with a wire, but they can also provide data transfer from one router to another. Then it would be possible to get 1 Gb / s or almost everywhere in the house.

Not a very professional router

The Nest Wifi Pro is the most powerful of the three Google mesh routers, with a maximum theoretical speed of 4.2 Gbps (I say theoretical because in practice the speeds achieved are usually far from the declared ones).

However, this is not a professional router, contrary to what its name implies. Its software capabilities, for example, are very limited. Some advanced settings are missing (for example, for those who want to carefully manage the different bands of their Wi-Fi network), and the speed of the Ethernet ports (1 Gb / s) is below average for a device in this class. view (meaning you won’t be able to take advantage of the closer view).

Another problem: routers are controlled by the Google Home app, which is designed to control your entire connected home. Unfortunately, the fact that this is a general purpose app detracts from the experience a bit, as tutorials and certain additional information are harder to find than in a dedicated app (like Deco, which lets you control the Deco X60).

Who is it for?

The users who will benefit the most from Nest Wifi Pro are those who do not have a mesh network at home. Regardless of the speed of your internet plan, your Wi-Fi network will work well throughout your home (one terminal covers up to 120 square meters, and a set of three terminals covers up to 360 square meters, according to Google, but the presence of walls significantly reduces their effectiveness ). There are cheaper options (like Google Wifi), but the Nest Wifi Pro’s Matter compatibility is also a nice bonus.

If you already have a mesh network, it’s harder to recommend a purchase. With a very fast internet connection (but less than 1 Gbps), a router can be interesting. There are better or even cheaper options, but the Nest Wifi Pro is still worth considering, especially if you like its looks.

However, if you have a regular high-speed connection (like I have at 120 Mbps, which is fine for the vast majority of people) and you already have a mesh network, you probably won’t notice a difference by replacing routers with one-it.