Thunderous departure for Lupine in the shadow of Arsene. The new Netflix series, directed by Louis Leterrier (The Transporter, Danny the Dog, Elusive) and with Omar Sy headlining. It has had great success in France, but also internationally.

Lupine on top this week

The series is ranked first in several countries, in Germany, Italy, Spain, Morocco, the Netherlands and Belgium. She even managed to find a place in the American Top 10, a first according to Deadline.

Entering 8th position, it even pranced for a moment at the top of the ranking, ahead of the very popular The Bridgerton Chronicle, Cobra Kai and The Queen’s Gambit. 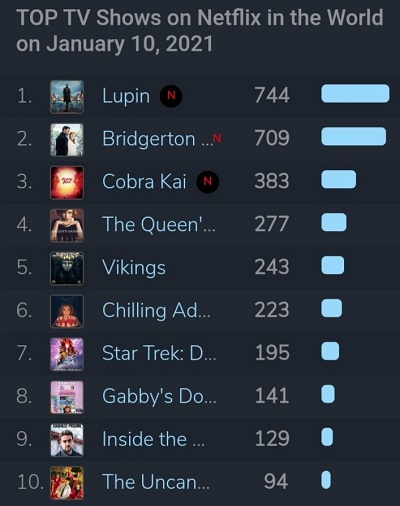 This modern version of Maurice LeBlanc’s Lupine is a good entertainment that, however, does not ignore more serious issues.

In addition to the popular success which seems to be at the rendezvous, the reviews are also generally positive. The series also obtains the good rating of 86% among spectators on the specialized site Rotten Tomatoes. What, perhaps, a little to explain this remarkable entry in the American Top 10.