Since the announcement of the Netflix adaptation of the Grisha trilogy by American Leigh Barbugo, the series Shadow and Bone arouses the curiosity of fantasy enthusiasts. The saga is a reference in literature young adult, it has sold several million copies worldwide.

From the outset, the SVoD platform was therefore expected at the turn. For a long time she has been looking for her reference fantastic series, her “Game Of Thrones” as some do not hesitate to assert.

In vain, since no creation of the kind has yet had the echo and the success of the serial version of the novels of George RR Martin. Shadow and Bone is she the lucky one? Possible, it has in any case strong arguments to claim the crown.

For those who are not familiar with the trilogy Grisha (Orphans of the Kingdom, The Ice Dragon, The Firebird), Shadow and Bone may sound confusing.

The universe of the series is complex, to say the least, and she doesn’t bother with unnecessary explanations. Ravka is a kingdom split by the “Fold”, a thick fog filled with bloodthirsty creatures.

For ages, the human army has been trying to dispel it to better cross it, without much success. Even the help of the Grishas, ​​powerful wizards with multiple powers, does nothing.

With each expedition, the troops are decimated and, to make matters worse, mistrust reigns between the infantry and their magical allies.

In this tumult, Alina Starkov seems to be a young and banal cartographer without history. A journey in the fog will change everything. In a critical situation, she reveals herself and shows the extent of her powers. More than a simple Grisha, she would be the “Saint of the Sun”, the only being able to chase away the fog.

As great power comes with great responsibility, she quickly finds herself propelled into intrigues that are beyond her. This lays the foundations for Shadow and Bone.

But that’s not all, since an entire arc is also dedicated to Kaz Brekker and his gang, the heroes of another Barbugo saga (Six of crows). In short, the beginnings of show are a bit confusing. Better to hang on to understand all the intricacies of the plot and the whims of each.

Yes Shadow and Bone At first it seems a little abrupt, it interests from the first moments, despite its “silent” side, its particular vocabulary and a difficult context to understand. At least we can’t blame him for his lack of ambition.

Does the charm work?

As Game Of Thrones, Shadow and Bone weaves a complex narrative and multiplies the jumps between its different protagonists. The whole is cohesive and, above all, the characters all have something to offer.

Alina, Malyen, Kaz, General Kirigan (the “Darkling”), Inej or Jesper … in their own way, they each bring their own contribution, even if they also have limits. Overall, their performers do a good job and make up for the lack of relief of some heroes.

Alina is the Chosen One, a classic of fantasy stories. She is far from fearless and blameless, but her heart is pure and she wants to do good. Her powers and the lusts they arouse turn her life upside down and force her to harden. 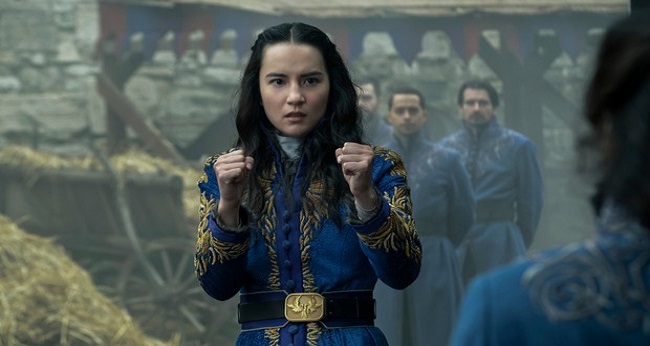 It is inevitable, her only hope of protecting those she loves and of fulfilling her destiny, without being manipulated and falling into the many traps set in her path.

Like her, others are also tortured and forced to make difficult choices. Shadow and Bone succeeds in immortalizing the dilemmas of each one, it is one of its strengths.

Visually, it is a success. Netflix is ​​giving itself the means to achieve its ambitions and the series makes a good impression, especially thanks to its well-crafted special effects. It’s beautiful and well highlighted by an achievement capable of pulling the most epic of its plans. On the other hand, the staging often lacks originality, we would have appreciated something more daring.

But, the universe corresponds well to what we imagined while reading the novels, which is very good sign and allows Shadow and Bone to collect another good point.

The “Kaz” of the century

The hero of Six of crows does not appear in the literary version of the saga Grisha, it is therefore an addition decided specifically for the series. A good thing, since it comes to bring a little nuance in a universe filled with stereotypical characters.

Kaz is the quintessential anti-hero, a dark young “thug” with a troubled past guided by profit alone. Getting rich and expanding his influence in the Ketterdam slums seem to be his only concerns.

But beneath his ruthless airs, the shell, at times, cracks and reveals Kaz’s “weaknesses”. He is more ambivalent and unpredictable than the others, locked into their role of “bad” or “nice”. Integrate it into Shadow and Bone was a rich idea, his charisma is good for the series.

Even if it is generally well written, the screenplay regularly lacks finesse. Certain reversals of the situation are expected, such as the foreseeable evolutions of a not insignificant portion of the characters.

The first episodes are compelling, but as soon as the groundwork for the plot is laid, the series loses its intensity. It almost seems that she is resting on her achievements, without taking more risks than what is strictly necessary.

Finally, we must not forget that Shadow and Bone is the adaptation of works intended for adolescents and young adults. Obviously, the series is aimed primarily at the same target.

So do not expect the maturity of Game Of Thrones, a series where raw violence and sex reign supreme in almost all episodes. The program that interests us here is wiser, to say the least.

In his characters as in his plot, Shadow and Bone therefore does not escape some clichés of the genre. This is particularly visible in the romances, all quite cartoonish.

However, when it comes time to take stock, the series leaves a good impression. Better still, she succeeds in her bet: to immerse us in a rich, elaborate universe that can count on an abundant mythology.

Despite its apparent complexity, the show popularizes quite well the universe imagined by Leigh Barbugo. It is a beautiful epic and a bet that seems successful for Netflix. SVoD’s platform will undoubtedly be keen to capitalize on Shadow and Bone in the future.

It is still early to know if it federates as much as the iconic fantasy programs, but the firm of Reed Hastings may finally hold its benchmark of the genre.