When we talk about mesh WiFi, we are talking about devices, generally sold in packs of two or three, capable of enlarging the size of the WiFi coverage of a household. If we add the number “6” after Wifi, it means that we are dealing with a meshed Wifi 6 system (some will say mesh). It is therefore capable of extending the wifi coverage, and on top of that, in Wifi 6, namely in the new Wifi standard, on the way to impose itself in all new devices. Useful when your box cannot yet broadcast Wifi 6.

The problem with these WiFi 6 mesh systems is that they can sometimes seem unaffordable. In many homes, the advance offered by the new Wifi standard will certainly not be worth the cost, and we will prefer to turn to models, admittedly meshed, but supporting the old standard, Wifi 5 (or Wi-Fi 802.11ac ).

By offering a 215-euro model, the Orbi RBK 352, Netgear has understood this dilemma and reduced the gap between the two standards. The Californian brand is even placed at only a few euros of many mid-range models in Wifi 5, like the Deco P9 of its competitor TP-Link, or even its own Orbi RBK23. Likewise, if we compare it to Wi-Fi 6 models, the Orbi RBK352 is quite simply the most affordable on the market. So, does he win on both counts? And what does it give up compared to more expensive models?

A QR code to connect

The Orbi RBK352 comes in a small square box, which contains two devices. One will act as a router, the other as a satellite. The router broadcasts wifi and sends information to the satellite, while the satellite simply broadcasts the wifi network. Together, they are capable of covering up to 200 m² of surface area, with a maximum speed of 1.8 Gbps according to Netgear. Wifi is divided into four streams, two at 2.4 GHz, with a lower speed, and two at 5 GHz, with a higher speed, but a lesser range.

Inside the box, there are also two Orbi, an Ethernet cable to connect the router to the box, two power supplies, as well as two adapters for different geographical areas to be fixed on these blocks. Before connecting them, you must therefore install the European adapter. You will also find a very simple guide which invites you to install the Orbi application and which directs you to use the Cyber ​​attack protection provided with the Orbi, NetGear Armor.

At first glance, the two Orbi don’t look that different. These are two rather discreet white boxes, oval in shape and all rounded. They are approximately 18 centimeters high and 15 centimeters wide. 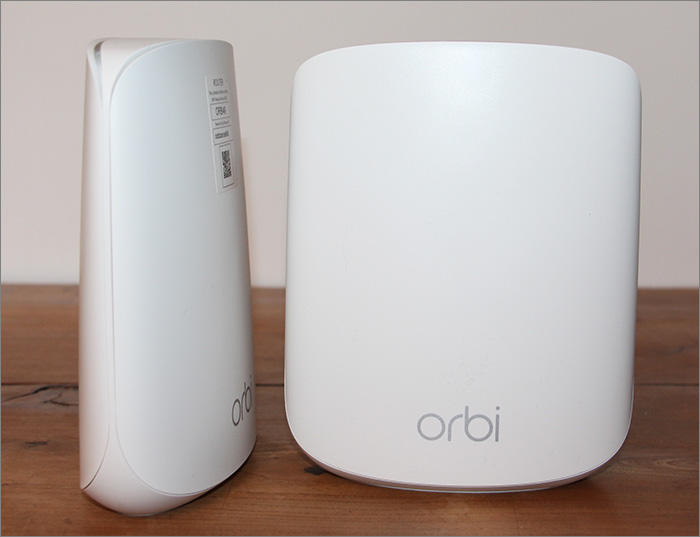 On the front face, there is a first difference: the router has a QR code which will be used during installation. Also, always on the front side, we will discover LEDs once the devices. Connected. They are found at the base of the product, just below the Orbi logo. Initially white, it may change and go through pink or purplish hues. 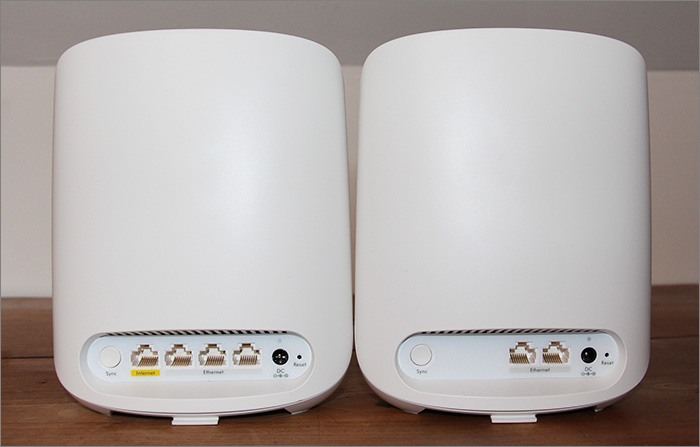 When turned over, it is easier to distinguish the two devices. The router has four Gigabit Ethernet ports. One is a Wan port, capable of transmitting up to 1Gbps of data, and is dedicated to the connection with the box. The other three are Lan ports. As for the satellite, it only has two Gigabit Ethernet Lan ports. In addition to these ports, there is an opening to ventilate the device, a “Sync” button and a reset button. Under the device, two other openings complete the cooling. 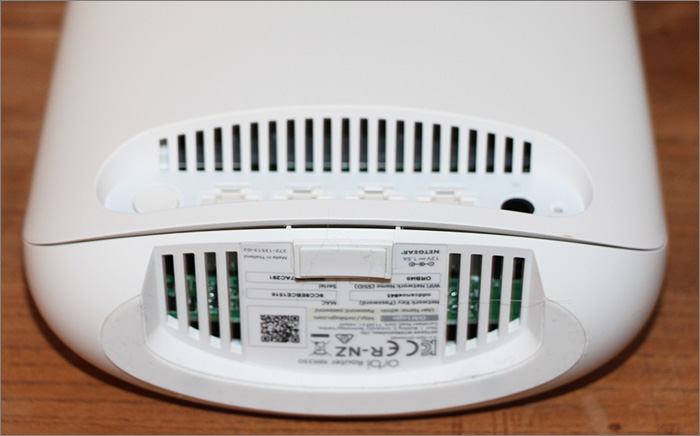 Let’s move on to the installation, and once is not customary with the Wifi Mesh, there is not much to write as this step is made easy by the dedicated application. Note all the same that it is a shame not to have provided an installation option via computer for those resistant to smartphones.

Go to Google Play or the App Store to download the Orbi application. Once installed, you must agree to Netgear’s terms of use, and by the way, data collection. Then the app asks you to access your location, otherwise it doesn’t seem to work. You are then asked to create an account by providing an email, your first and last name, as well as a password.

The actual installation can start. After restarting your Modem, the application asks you to scan the QR code of the router in order to identify it. You will then need to plug in the router, as well as the satellite “within range of the router’s Wifi”. There, a bar of a few minutes starts to lead to a screen in English, too bad for non-English speakers, who ask you to connect to the new Wifi network created by the two Orbi. 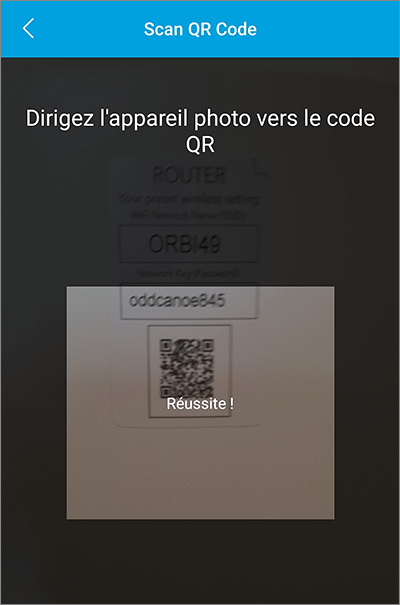 After a quick verification, you are prompted to create security questions to protect your account. Finally, after an update, the app offers you to try NetgearArmor for 30 days, which promises to protect the network, prevent all kinds of threats like viruses, spyware and others and even avoid online scams. line. 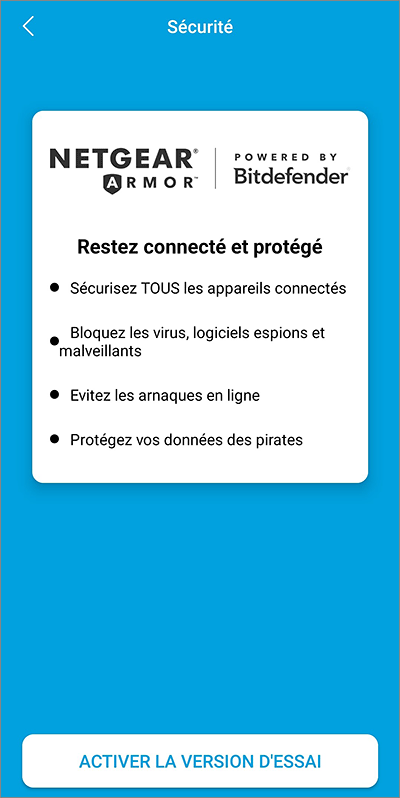 In the app’s security tab, Orbi assigns a network protection rating and recommends changes to improve it. It also sends notifications in the event of an alert or to make security reports. Unfortunately, these reports are all in English. It is generally well thought out and it would even be advisable to take a look at it at the end of the installation to discover the remote management of the application for example, which makes life a lot easier.

However, we regret that you have to pay to take advantage of these optional options, and that there is also a second paid protection offer, with BitDefender which is offered within the application itself. In a product over 200 euros, it’s always a bit difficult to swallow. 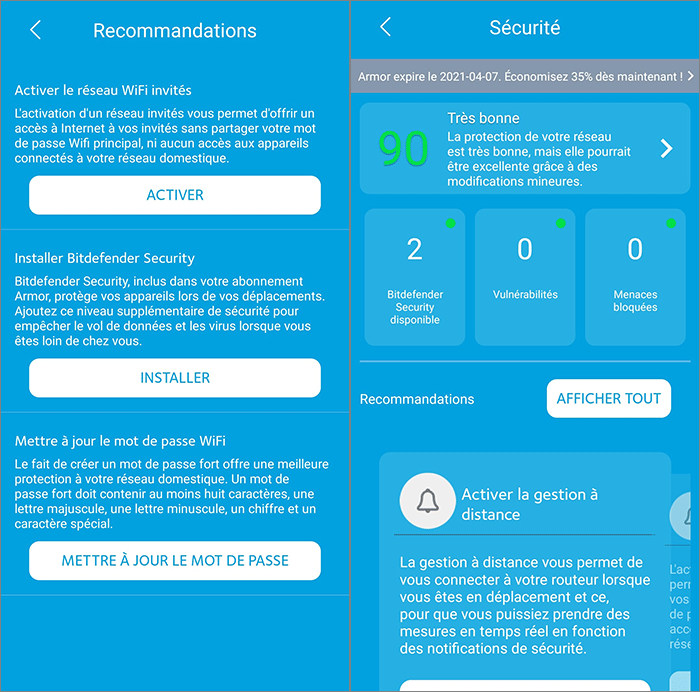 For the rest, the application is rather complete. It offers the possibility of creating a guest network to avoid sharing your password all the time. It also allows you to measure your internet speed, see which devices are connected and of course configure your network name and password.

Unfortunately, ergonomics are not necessarily always there. The application has a strong tendency to jump, or to load in a vacuum, which obliges to leave it to reload. Also, in the event of a fault, the LEDs on the Orbi light up in various colors, but the meaning of these colors is not very clear.

But the data that interests any future buyer of WiFi 6 mesh devices is obviously the speed. As is often the case with Wifi routers connected to the box, we see that the speed measured on the new network created by the Orbi is much higher than that of the box, here a Red SFR box. A difference of almost 1 to 3 here. The orbi broadcasts a download speed of 620 Mbps, where the box only climbs to 220 Mbps.

The most astonishing happens when you move further away, about thirty meters. At this distance, and behind several walls, we no longer even receive our box. There, the speed of the Orbi network tends to pick up the hair of the beast and to display an average between 208 and 330 Mbps. Our hypothesis is that at a modest distance from the router, such as fifteen meters, the Orbi system continues to pass data through the router, whereas as it moves away, it is forced to pass through the satellite. , and therefore the flow increases because the necessary range decreases. Despite this small inconvenience, the mission of the Orbi is still fulfilled, because a good flow is still ensured at a much greater distance than at the start.

For a lower price, remember that it is possible to afford three wifi 5 satellites, with the P9 from TP-Link for example, which offers excellent value for money for greater wifi coverage and also offers CPL . For about the same price, but with much higher throughput than the P9, Google Nest Wifi can also be a smart choice.

On arrival, Orbi’s new Mesh wifi does exactly what is expected of it: it places Wifi 6 within reach of a budget of 200 and a few euros, without offering a too degraded experience. It is even rather the opposite, apart from the somewhat capricious application, and the loss of flow at mid-distance, it is almost flawless for a very attractive product.

Wifi 6 doesn’t just increase speed, but it offers a host of features that allow more devices to be managed at the same time as the old standard. In doing so, it necessarily gains in speed of execution, because there is no longer any need to wait for it to process a data request from a user in order to be served. An agility to serve several devices at the same time, which makes it very attractive for anyone interested in the connected home. The Orbi RBK 352 is also compatible with two Amazon Alexa assistants as well as with the Google Assistant.