It was like a little bomb in the fighting game community. For good reason, Nickelodeon All-Star Brawl wants to walk on Super Smash Bros. beds and it will be released on all machines. Carried by many licenses from the American television channel, does this fighting game have enough to dethrone Nintendo’s success? (Spoiler, not really)

Wavedasher till the end of the night

So let’s briefly recall the concept of this Nickelodeon All-Star Brawl. Up to 4 players compete against each other as protagonists of different Nickelodeon licenses. As in Smash Bros, each attack will increase the percentages of the affected player. The higher this percentage, the further the next hit will throw it away. Leaving the playing area is synonymous with death. Each character has a variety of unique moves. Weak shots are dedicated to raising the percentages. Powerful ones are used to drive opponents as far as possible, while special attacks have a utility role. The Top special attack is often used to return to the field, for example. Each of the 20 characters has their own unique attacks that usually refer to their personality or the cartoon they came from. To this heart of the gameplay are added some subtleties, to say the least, of interest to those who have played a game of the genre. For example, pressing the left trigger allows you to move without turning around. Therefore, it is very easy to orient your next attack to better adapt it to the situation. Players also have access to a handy aerial dashboard that offers a bit more technicality to the title. As in the Smash Bros. Melee cult, players can run to the ground to slide and perform a Wavedash. In All-Star Brawl, this manipulation allows you to gain speed and quickly bridge distances. By using this option in conjunction with the previous one, players have a high degree of control over their avatar and can pull off some downright impressive sequences. Once this technique is built in, moving and fighting becomes really fun in Nickelodeon All-Star Brawl. Too bad that currently, we regret that some commands are inaccurate. It is common for a lateral special attack to be recognized as a descending special attack when the club is not perfectly tilted 90 °. The same goes for moving with arrows, which simply don’t take diagonals into account. These imperfections are sometimes penalizing, hopefully the development team will react quickly. However, it is obvious that this team has its own vision of the Platform Fighter and that the result is compelling. 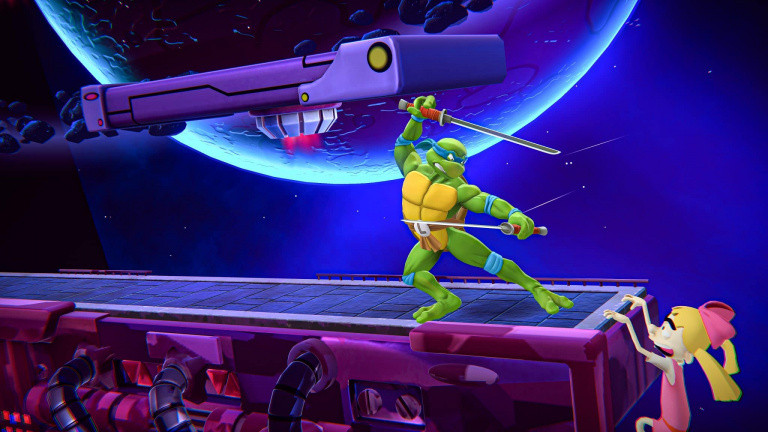 If from a technical standpoint Nickelodeon All-Star Brawl isn’t outrageous and the sets are doing it with honors, it can hardly be denied that some models lack finesse. If SpongeBob and other Leonardo Ninja Turtles have received satisfactory treatment, others are a bit hard to see. Danny Phantom and Aang are not really convincing and we think Fair Play Labs studio has a harder time bringing realistic proportions to life than slender, exaggerated figures. Animations, in general, lack readability and impact. The heroes appear to slide across the ground and some movements do not match their collision box at all. It’s a shame, because these imperfect animations make games smoother and more inaccurate than they actually are, and the essence of the experience is quite successful. We also regret the complete absence of dubbing and licensed music. Nickelodeon doesn’t seem to have believed enough in the project to fully invest. This would have allowed NASB to gain in personality and credibility. 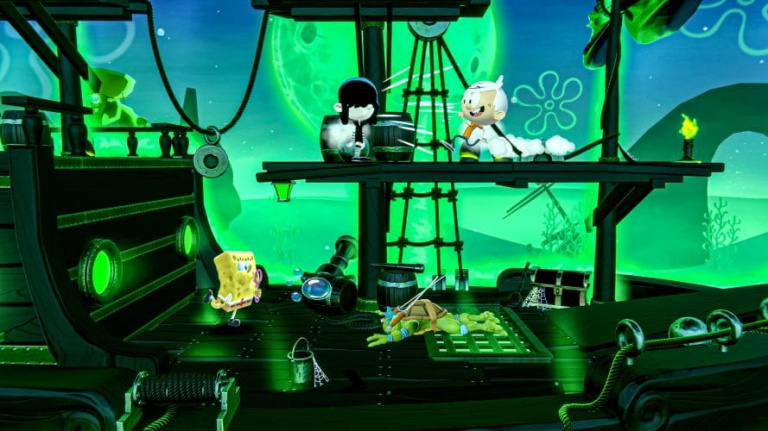 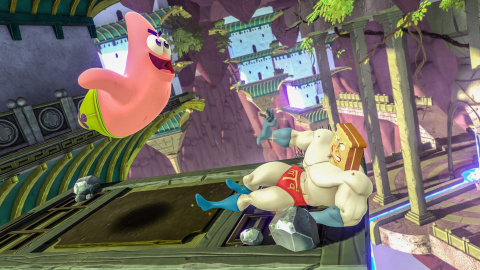 Finally, we quickly understand that the NASB decides to focus on the essentials. It’s to his credit and it’s an excellent decision from a gameplay standpoint, but we can still regret a bit of petty content. If the twenty playable characters are more than enough to have fun, there are very few courses adapted to the competition. Only 4 can be selected in the “Competitive” queue, which is not enough given the target audience, to which we will return later. The 16 fun courses dedicated to matches of 4, like this kitchen where you can bounce in the toaster and burn your butt in a skillet, are enjoyable. However, very few delusional elements interrupt the action and the result is a feeling of life. And if we can always get into “Sports” mode to kick each other with a soccer ball, the whole thing may be lacking in general public insanity. No object to throw in the face makes its appearance on the ground while the dangers are quite spot on. 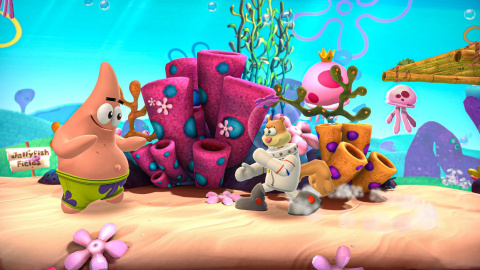 However, these flaws shouldn’t bother the players Nickelodeon All-Star Brawl aims to reach, as this fighting game has a very specific demographic target. By implementing a network code rollback, a means of network connection that has proven its worth in the small world of fighting games, and by splitting most of the content and gameplay into 1v1, NASB is flirting with Hardcore Smash Bros. Gamers, tired of their bedside gameplay and far-from-perfect connection, will pay less attention to technical quality than game mechanics and will quickly get used to the animations at times dangerous. This Nickelodeon-branded game is also interested in non-Switch players who wouldn’t have found their favorite game in Rivals of Aether and Brawlhalla. Hopefully, the teams at Fair Play Labs will listen to these passionate players, because they are the ones who will bring Nickelodeon All-Star Brawl to life.

Nickelodeon All-Star Brawl is full of flaws. Not very pretty, not always very accurate, a bit lacking in content, the original cartoon dubbing is absent … Fair Play Labs’ fighting game exudes passion, however. We don’t recommend it to everyone, as the NASB targets a very specific niche. By mimicking the physics of Super Smash Bros. Melee and implementing one of his advanced techniques, this atypical fighter manages to seduce those nostalgic for the early 2000s. Those who will see it as a good way to immerse themselves in the licenses of his childhood while rediscovering familiar sensations and a solid competitive environment. Hopefully the studio follow-up will be good, as Nickelodeon All-Star Brawl has something.

Give your opinion on the game!