Apple events, like the recent WWDC keynote, are totally stupid. They arouse such enthusiasm on the part of users that the specialized press is interested in them closely. Because yes, if you think in terms of audience or traffic, news related to Apple products and their coverage is always a godsend.

Everyone in the world of tech journalism knows that Apple’s ad coverage pays off big in terms of audience. Even information that is much more important to IT professionals, like the shutdown of an oil pipeline following a hack, doesn’t perform as well as the announcement of Apple’s new toys.

That’s why we – journalists – tend to make the most of it. We post expectations and rumors ahead of the event, and some even post articles on products that weren’t announced, speculating on when they might eventually be available.

For last week’s WWDC, product expectations were pretty high. Rumors were about a new MacBook Pro. Speculation was rife, based on scarce evidence, about the announcement of a new M1X processor. In fact, no new computers or processors were announced at WWDC. So when will the new Macs be announced? You guess it. Yes, I am about to speculate.

New Macs often available at the end of the year

The following table shows the months when new Macs were released. I’m presenting the release dates here rather than the announcement dates, as the data is a bit easier to come by. Announcement dates (with the exception of the then new iMac Pro and Mac Pro) are a few weeks before release. 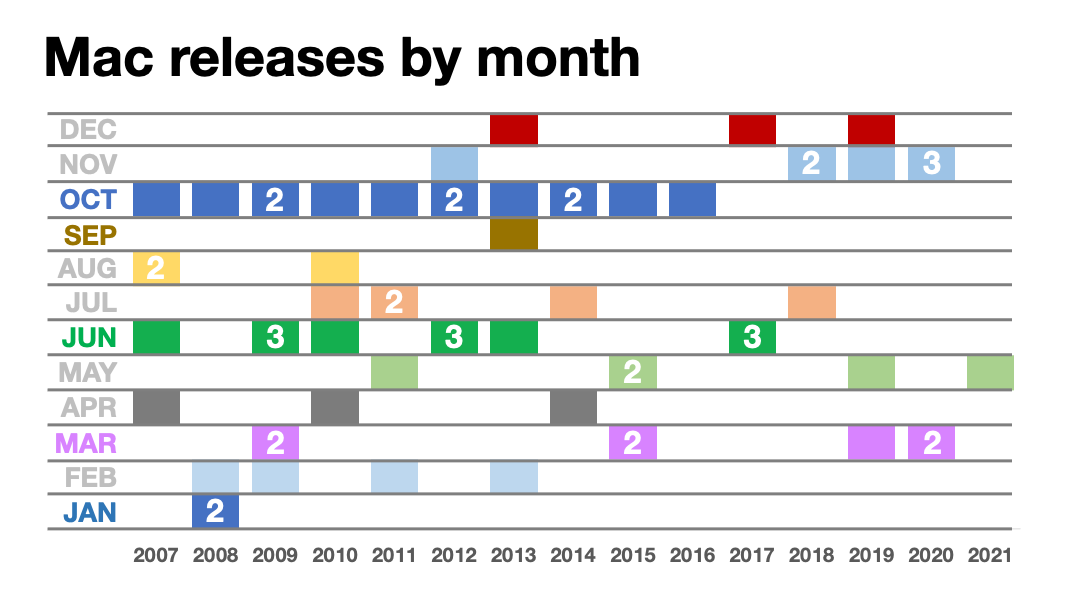 There are a few trends that are worth highlighting. From 2007 to 2016, there were always new Macs released in October. This trend seems to have faded in recent years, but there were releases in November and December. However, one constant seems to have remained stable from 2007 to 2020: New Macs are available in the last three months of the year.

Of the 64 product releases since January 2007, only nine have taken place in July, August and September. So, only 14% of all Mac releases were in July, August, and September. What’s more interesting is that all of these summer releases except one were in 2014 or before. In the past six years, only one release has taken place in those months: an increase in specifications for MacBook Pros, which took place in July 2018.

Recent Mac release trends are a bit more erratic in winter and spring, especially recently in March and May.

So when will the new Macs hit the market?

Based on historical trends and a full analysis by Steve, our intelligent global supercomputer hidden deep in ‘s top-secret underground lair, you’re unlikely to receive anything new until November. If Apple announces another M1 processor upgrade, you can be sure that it will make a big deal out of it, and not settle for just a simple press release in the middle of the summer.

If there is a specification upgrade, and I highly doubt it, it could be an increase in the maximum RAM available on the M1s, which are currently capped at 16GB. This RAM cap is most likely due to chip performance, so there’s a slim chance Apple will introduce a 32GB option – but don’t count on it.

If Apple is going to release a new Apple Silicon-based Mac Pro or iMac Pro, or if Apple is releasing the rumored 16-inch MacBook Pro, or even a Mac mini based on a next-gen Apple Silicon chip, your best bet is November. .