On the occasion of the final GTC conference on September 20, 2022, Nvidia, as expected, unveiled its new consumer microarchitecture: Ada Lovelace, named after the mathematician of the same name.

It consists of 76 billion transistors manufactured using TSMC 4N technology and includes Micron GDDR6X memory. In its most powerful version, it has 16,384 CUDA cores and develops 1320 TFLOPS for deep learning (FP8), 191 TFLOPS for ray tracing, and 83 TFLOPS for shaders. Among its new technologies is Shader Execution Reordering, which makes it more efficient to perform the calculations associated with these renderers that have become important for real-time 3D.

Another major new feature is Deep Learning Supersampling (DLSS) 3, which uses neural networks to improve image quality while reducing power requirements. Previously, this process was limited to increasing the screen resolution, but a new feature called Optical Multi Frame Generation allows you to create new images (frames) from scratch based on previous and subsequent ones. Nvidia is announcing an impressive performance boost, with Flight Simulator boosting its frame rate from 52fps to 107fps with DLSS 3, for example.

Unity and Unreal Engines are already compatible with this new version and it is said to be implemented in over 35 games and apps. The company also highlights the progress made in ray tracing over the past four years: Cyberpunk 2077 is said to perform 16 times more computation than the first RTX-compatible games released in 2018. For video, enable dual 8th generation AV1 encoders Cut export time in half.

Nvidia claims that the flagship of its new GeForce RTX 40 lineup, the RTX 4090 GPU, has up to four times the performance of its predecessor (RTX 3090 Ti) when an application uses all of its features. And it will have twice the performance of the previous generation at the same power consumption (450W). The RTX 4090 has 24GB of GDDR6X memory. 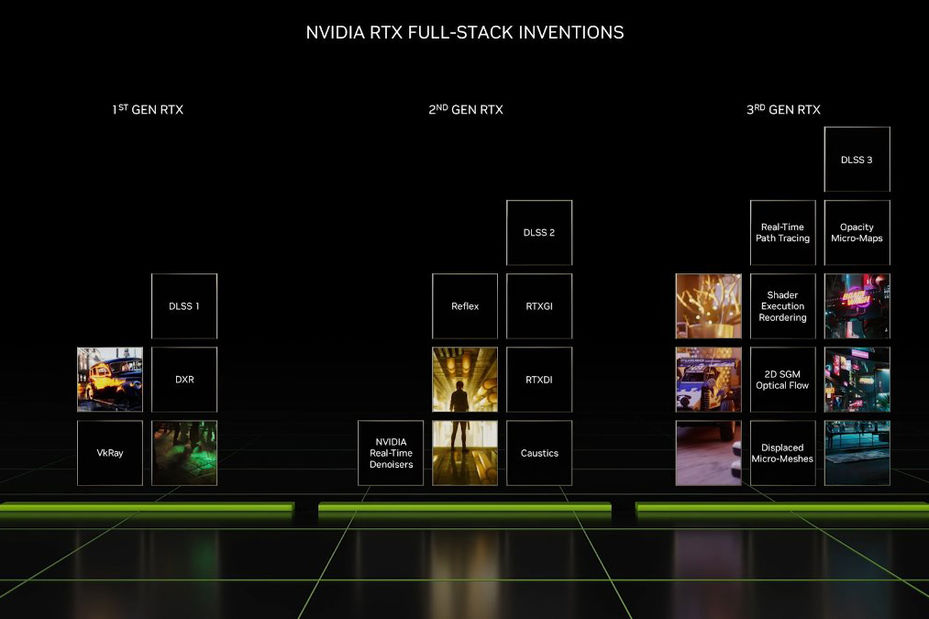 The first RTX 4090 cards will be available starting October 12 starting at $1,599. Both versions of the RTX 4080 will be available sometime in November for prices ranging from $1,199 to $899. The usual graphics card manufacturers will be there: Asus, Gigabyte, MSI, PNY… Nvidia will also offer Founders Edition models.

Ada Lovelace is the consumer counterpart to Hopper, the data center microarchitecture that was unveiled in April and announced today by Nvidia.

We find Hopper in the H100 chip, equipped with 80 billion transistors and replacing the A100. This GPU is mainly for training AI models. Nvidia describes this as reducing the overall cost by a factor of three compared to its predecessor for the same performance.