Grab your popcorn, the whole family and 3D glasses, the show is about to begin! Will the updated RX 6750 XT be able to compete with the RTX 3070 in terms of popularity among gamers? We’ll cover features, pricing, performance, and which of the two hot rods deserves your hard-earned cash. Oh, both companies have a few software tricks up their sleeves, such as Nvidia’s DLSS and AMD RSR resolution scaling technologies.

Don’t worry, it’s safe now – GPUs are available everywhere. Prices quickly returned to MSRP, and in some cases even lower. While the GeForce RTX 3080 and higher GPUs have seen the biggest price drops, you can expect the RTX 3070 retail price to be much closer to $499 (and generally less than $579 for most models, although some models remain more expensive). The AMD Radeon RX 6750 XT is also spot on at $499 to $549.

However, is it really safe to buy? With Nvidia RTX 4000 graphics cards and next generation AMD RDNA 3 graphics cards on the horizon, today’s MSRP prices aren’t as pleasant as you might think. We assume that another round of price cuts is expected after the announcement of the next generation of hardware, so be careful.

Performance is key in this part of the market, where price pressure makes every ounce that can be squeezed out of silicon especially valuable.

In Watch Dogs Legion, the RX 6750 XT is rendered even at 1440p, and as you increase the resolution, an imperceptible gap opens up. This is with software magic disabled, such as DLSS and ray tracing.

The close story continues similarly with Horizon Zero Dawn, but this time the RTX 3070 takes a small win. Also note that the RX 6750 XT has a very minor performance boost over the RX 6700 XT it replaces.

Some games like Borderlands 3 run better on AMD GPUs like the RX 6750 XT giving it an edge over the RTX 3070. 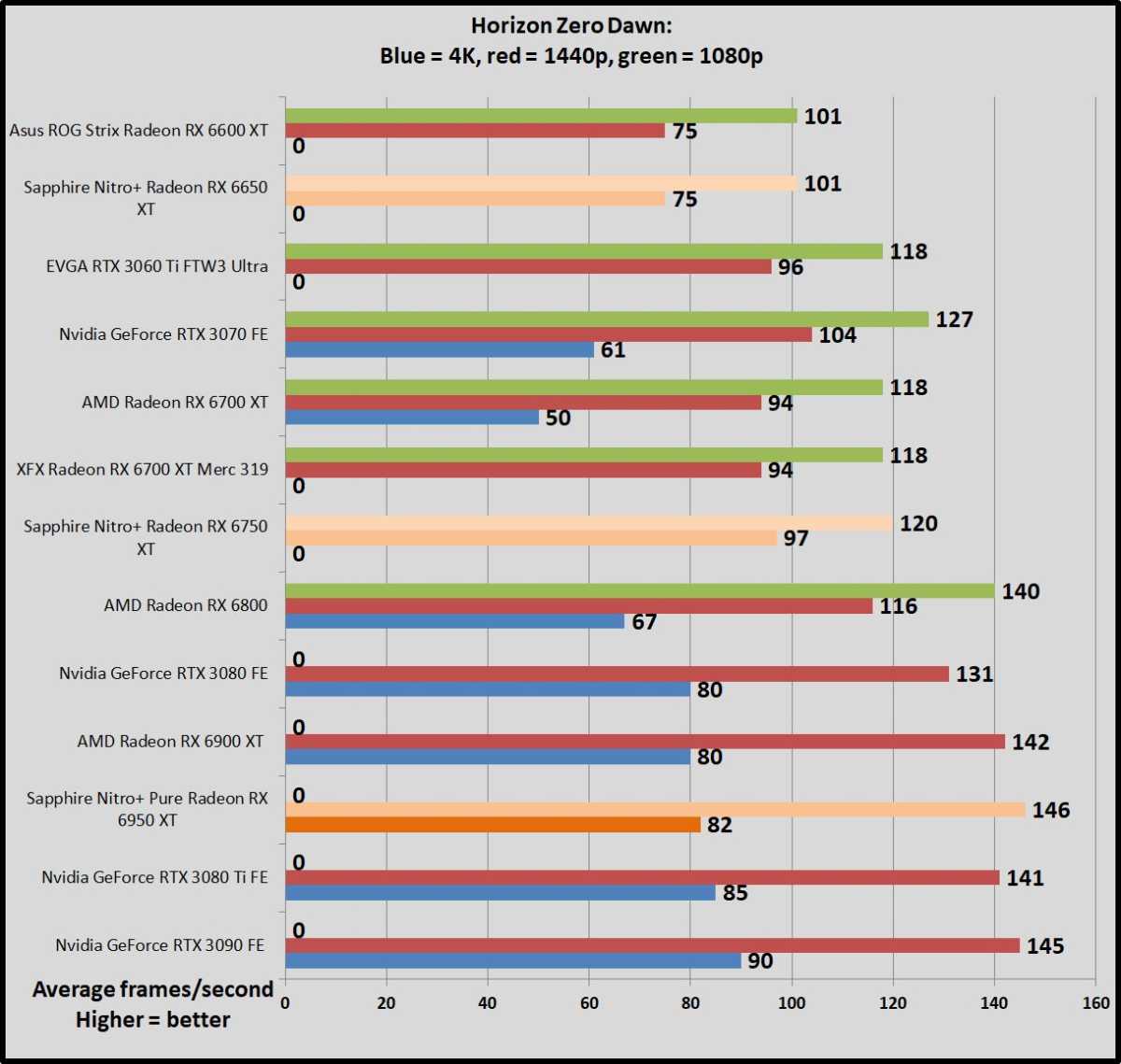 You’ve seen the raw GPU hardware power above, so what happens if we bring other technologies into the mix?

Take AMD Smart Access Memory and Radeon Super Resolution, two driver-level features that work in any game. Nvidia can also take advantage of turbocharged software, although its excellent DLSS solution requires active developer integration into games (as does AMD’s rival FSR). These technologies allow you to balance a high level of performance with an optimal visual experience.

Is the RX 6750 XT faster than the RTX 3070 as AMD claims in the chart below? Yes, but this is greatly helped by the use of the RSR and SAM technologies described above. 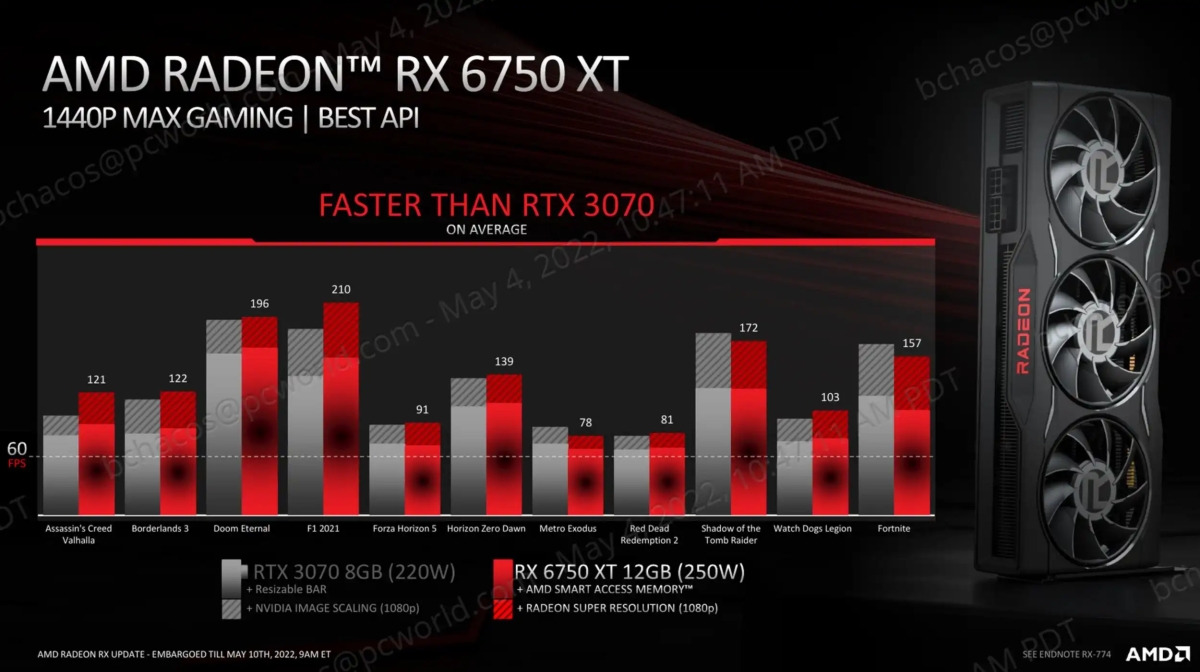 AMD software magic to bring it to the top.

However, Nvidia still retains a significant lead when it comes to ray tracing. As the inclusion of Ultra in Watch Dogs Legion has shown, Nvidia has a dominant advantage with the feature enabled – and that’s without DLSS active. It can be argued that reducing ray tracing has a payoff for most games, but can still have an impressive visual impact. As the RTX 3070 and RX 6750 XT reach higher levels of GPU performance, they should be of interest to mid to high end gamers. 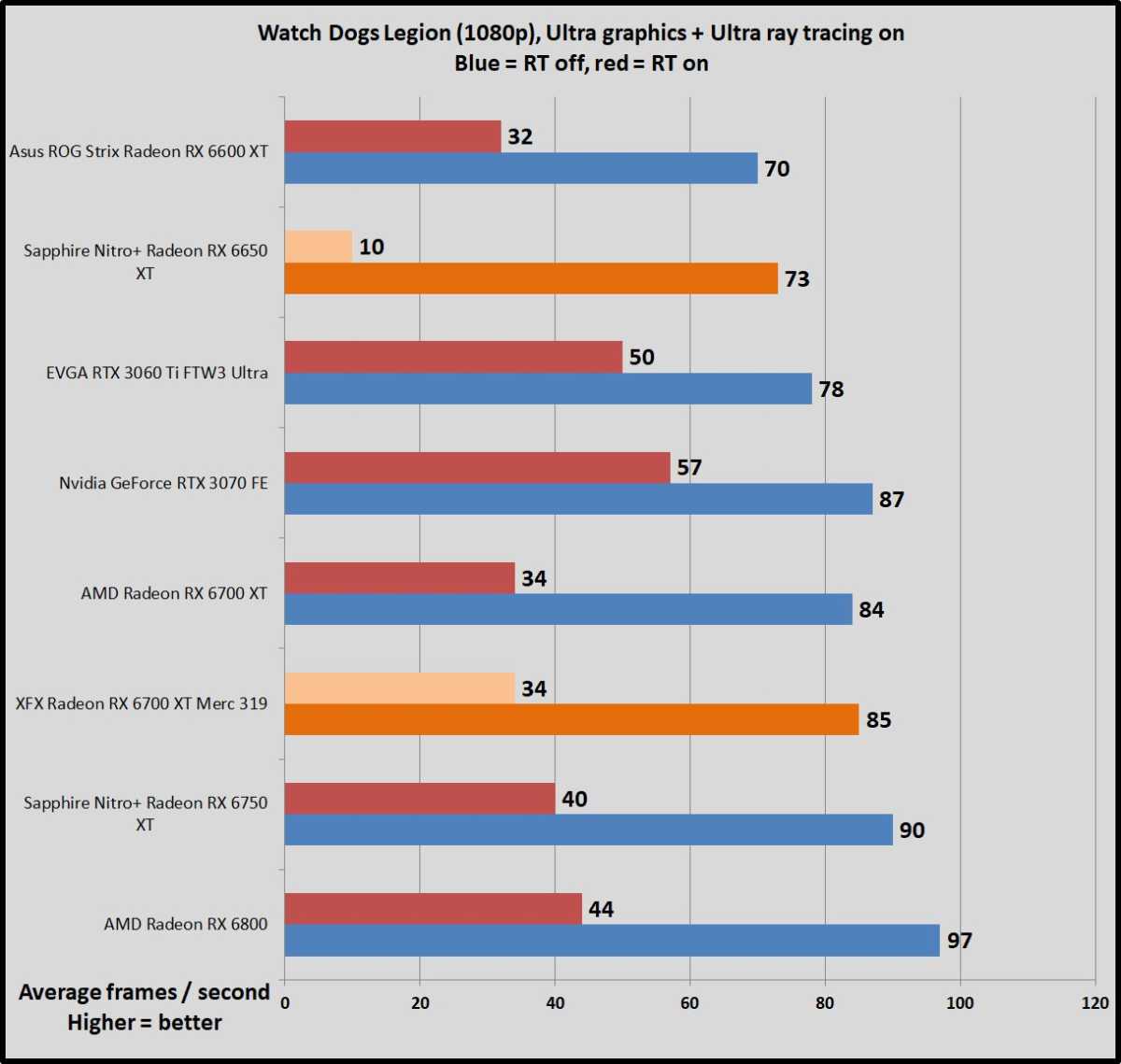 Nvidia is still leading the way in ray tracing.

The RTX 3070 and RX 6750 XT aren’t power hungry compared to their bigger brethren, but still have a TDP of 220W on the Nvidia side and 250W on the 6750 XT. This means you’ll need a decent power supply and sufficient airflow in the case. They go to the next level of GPUs with performance equal to the latest generation’s best dog: the RTX 2080 Ti.

These GPUs are great for high resolution 1080p gaming as well as 1440p. This is their favorite place. While they can play 4K, some games may require the power of, say, RTX 3080 class GPUs and above.

Tough time being a GPU: Prices have plummeted. But they are still quite high compared to the next generation of next generation GPUs that people are rightfully wary of buying now.

The release of the 6750 XT happened during this downturn, so it took a backseat pretty quickly. It definitely has the performance to match or beat the RTX 3070 in many ways, especially with the AMD SAM and RSR boost it gets. Generally, the RTX 3070 is still the more popular offering – and it outperforms ray tracing over the AMD option if you need it.

The edge will still play in favor of the RTX 3070 in the long run, but AMD has certainly done a great job at a lower average cost than Nvidia’s option. If you can find one at a significant discount over the other, that can also be the deciding factor.

However, smart money waits longer. The RTX 4000 and AMD’s own offerings are coming soon, and that will push the prices of the current GPU lineup even further. While you can’t wait forever, the unique circumstances of the current market make it logical to wait a little longer. You are likely to be rewarded with an even better price or better performance, as is the case with next generation releases.