Initiated by the Donald Trump government, the Artemis mission is an ambitious program to return humans to the moon, more than 30 years after the Apollo 17 mission. set foot on lunar soil by 2024many events have disrupted the original schedule, pushing back the target of the forecast.

What is the purpose of the assignment? Who are the partners? What difficulties arise? What to expect in the coming months? We’ve compiled everything you need to know about the Artemis mission for you.

Sending people to the Moon has known how to do it since Neil Armstrong and Buzz Aldrin first set foot on lunar soil in 1969. NASA’s goal for the Artemis mission is very different.

NASA hopes that upon completion of 37 missions planned through 2028, create an outpost on the moon serves as a relay for further space exploration. To achieve this, the agency must solve several problems, such as energy production or the supply of oxygen and water.

One of the main concerns of manned space exploration is the carrying capacity of rockets (or payloads), and anything that can be produced locally allows other elements to be carried. In addition, the possibility of refueling with water and oxygen on the Moon allows a significant increase in the payload at launch (since the Moon’s gravity is much lower than Earth’s).

In terms of energy, NASA plans to locate its base at the south pole of the moon, where there is enough sunlight to power photovoltaic panels. The agency will also explore the possibility of installing mini-nuclear reactors in order to be completely autonomous and have all the necessary energy. 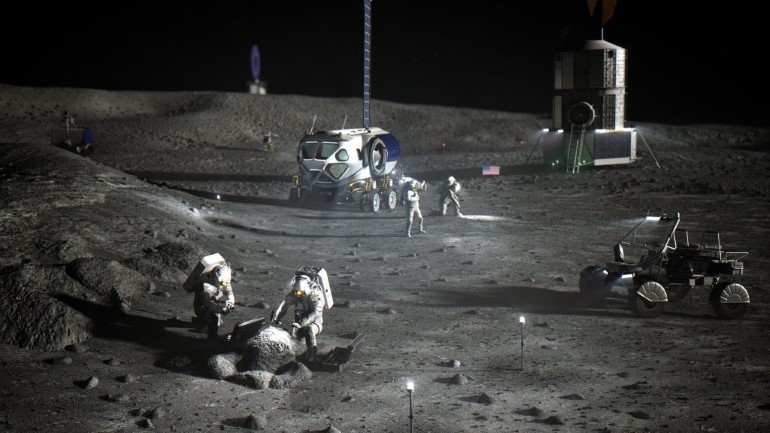 Illustration of astronauts at the South Pole of the Moon. ©NASA

This location will also provide access to the frozen water reserves that are hidden at the bottom of the craters. Using a robot designed for this purpose, the agency can extract liquid water to meet local needs.

The problem is with oxygen. According to experts, the regolith is full of oxygen, and extracting it would provide a more than adequate supply of oxygen (enough to support 8 billion people for about 100,000 years, according to the report). The only problem is that this mining is extremely energy intensive, hence the need to find an alternative to solar energy.

Thus, the purpose of the mission is to allow the establishment of a forward base with (ideally) a permanent human presence. In order to ensure the safety of people who are to carry out such a mission and to study the impact of space radiation, the Artemis I mission, scheduled to launch on Monday, will send a CubeSat into deep space with a board, yeast, whose biological mechanisms are similar to those of human cells.

Who is on the mission

In order to complete a mission of this magnitude in such a short time, the US space agency, which does not have sufficient funds to manage everything from A to Z, called many partners
like SpaceX (which should take care of the lunar lander), Blue Origin, Dynetics, Lockheed Martin, Northrop Grumman.

The Boeing SLS launch vehicle will carry the Orion shuttle into space. During the first flight, scheduled for Monday, the shuttle will not carry people, but a full list of objects, as well as the famous Shaun the Sheep. 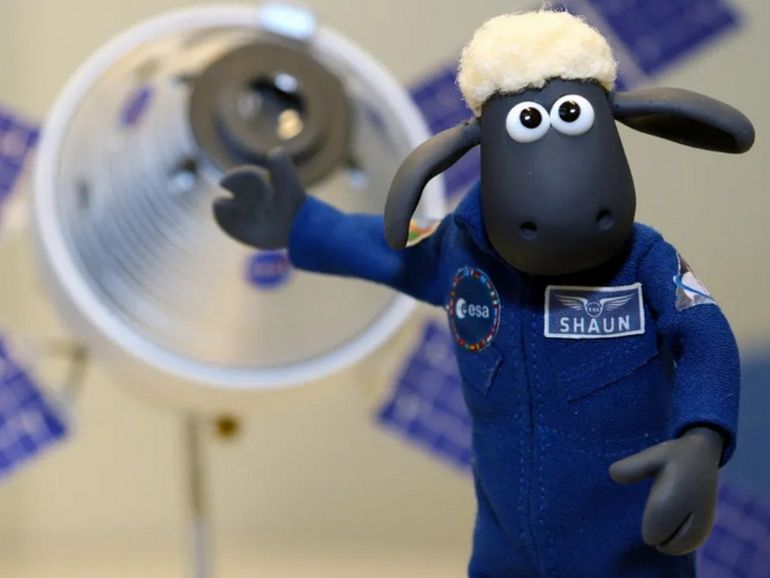 According to NASA, although it is still too early to tell the composition of the crew, The Artemis mission is to allow two astronauts, a man and a woman, to set foot on lunar land.. The agency also said that there will be one (or one) astronaut from Canada on the trip, and also insisted on its desire to open its selection to people from minorities.

‘Cause nothing goes according to plan

There are many grains of sand in a project of this magnitude, and some of them have a significant impact on the schedule. If it is not possible to list all the problems the agency faces, two of them received special publicity.

It was originally planned that NASA would call on several partners after a tender that was eventually won only by SpaceX (NASA justified this by the lack of a budget allocated by Congress). Jeff Bezos’ reaction was immediate and filed an appeal to the Accounts Chamber of the Government, resulting in a freeze on SpaceX’s asset payouts. Finally, the five partners mentioned above will indeed be working with NASA.

Away from the legal battle, the agency also ran into a major problem with development of new space suits. To ensure the safety of the astronauts, NASA wanted to develop the xEMU, a new suit that was seriously delayed due to the COVID-19 pandemic as well as funding issues. Since it cannot be delivered in 2024, the original mission schedule cannot be met and humans will not be able to set foot on the moon until 2025.

NASA may also experience delays depending on solar activity. Indeed, our star began its 25th eleven-year activity cycle in 2020, and depending on the intensity of the peaks, the agency may need to adapt its schedule to keep astronauts safe.

The next big step for the Artemis mission will be the launch of the Orion spacecraft, scheduled for Monday, August 29, 2022 at 2:00 pm. NASA will begin their live stream around 12:30 pm (Paris time), which you can follow live below.

Rest of the program

Once the Artemis I mission is complete, NASA will focus on the next phase. send people aboard the Orion ship. During the Artemis II mission, NASA will send a crew into orbit without landing on the Moon. The goal of this first manned flight is to make sure the various systems work perfectly for the next mission. The date has yet to be announced, but if the Artemis I mission goes according to plan, it could take place in 2024.

Scheduled for 2027, the Artemis III mission is to see humans return to the moon.. However, it is currently impossible to say that this will be the case, since this mission depends on many as yet unknown parameters.

It should also be noted that while NASA is currently focused on the Moon, the agency’s eye is indeed on Mars, which is the real target of this space program, as explained by Reid Wiseman, chief astronaut at NASA’s Space Center.