Selfies of criminals using cannabis, videos of street gang members having fun behind bars… More and more prisoners are posting content on social media, despite the efforts of the authorities to curb this scourge. According to data obtained by La Presse, a record number of mobile phones were seized in 2021.

Delivered by drone, sometimes to the window, cell phones are flowing like hot cakes behind bars, where they are strictly prohibited. Quebec jailers seize hundreds of mobile phones in prison each month, more than double the number before the pandemic.

In 2021, correctional officers seized 959 mobile phones. A record set to be broken in 2022: Nearly 1,000 mobile phones were seized in custody in the first nine months of 2022, according to Department of Public Security figures obtained by The Press.

It has become common for a prisoner to post on Instagram or Snapchat, call his accomplices on the street, or even respond to insults from his enemies on social media.

Imprisoned criminals expose themselves with complete impunity. They seem to be unrestricted in prison and fuel their social networks by posting videos from their cells.

The contents of a drone found by correctional officers in a Montreal prison. There you can see drugs and mobile phones.

In just an hour of surfing Instagram and Snapchat, La Presse was able to view a dozen videos and photos posted inside the prison.

“Release me”, “I’ll be out soon”, “Release the gang”: “prison selfies” have become the new normal.

Not surprisingly, the sale of mobile phones in prison is a lucrative market. In early 2020, prices could range from $500 to $1,000. The amounts you have to pay to get a mobile phone have increased during the pandemic. Two sources told La Presse that they paid $2,500 for the mobile phone; they shared their precious device with other inmates to keep the cost down.

Everyone wants a camera in Bordeaux. The guys get together to buy. Do you want to keep in touch with friends, read the news, see what’s happening during [que tu es incarcéré].

One of the sources who received the phone in Bordeaux

Using a cell phone in prison provides an opportunity to feed your callers so they don’t fade into oblivion, but it can also allow conflicts to perpetuate or even escalate. “It lets you know what’s going on [dans la rue]. And if someone provokes you, you respond. »

“What we understand is the tip of the iceberg,” says Mathieu Lavoie, president of the Syndicat des Agents de la Paix en Services Correctnels du Québec. “This is a scourge for the safety of agents,” the union leader was alarmed in an interview.

According to figures released during the National Assembly’s Appropriation Study, provincial corrections officers have seized 400 to 500 mobile phones annually over the past ten years. 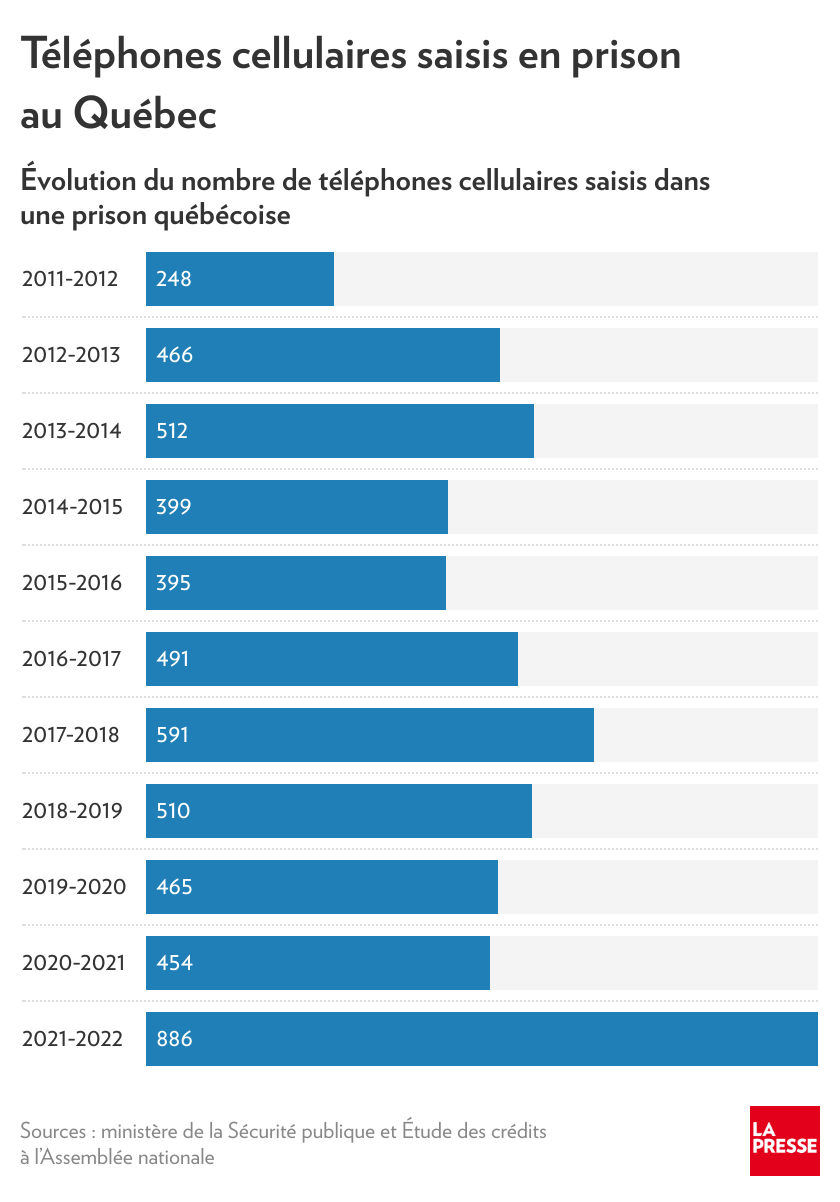 Like drugs and medicines, cell phones are highly valued by prisoners. “This allows them to continue their criminal activities, to carry out banking operations, to go out into the streets with their criminal connections. In the walls, it has a significant price, from 500 to 1000 dollars,” explains Mathieu Lavoie.

The phone also allows criminals to maintain their social media status. Some also post photos out of sheer bravado.

It’s a challenge: “See, I’m in prison.” Some have been seen taking pictures of themselves with bottles of alcohol in prison or with bladed weapons.

But Mathieu Lavoie does not attribute this increase in seizures to the pandemic. However, he suggests that the many periods of incarceration due to COVID-19 may have contributed to seizures, as prisoners found it harder to hide their phones.

The Ministry of Public Security attributed the explosion of seizures to the use of “dynamic searches” by employees, the improvement of search methods and the development of correctional sources. Detecting phones is a “priority” issue for the ministry, spokeswoman Louise Quintin said, because possession of the device allows prisoners to continue their criminal activities, intimidate a witness or contact a victim. e.

Delivered to the window

Nearly all cell phones are delivered by drone, a scourge that creates problems for the prison system, especially in the Montreal (Bordeaux) facility and the Rivière-des-Prairies prison. “It’s completely daily, even several times on the same day. And this is in ever greater quantities,” says Mathieu Lavoie. 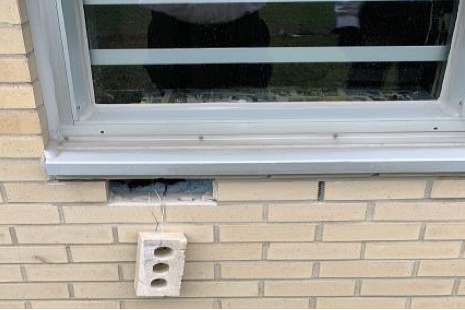 Some prisoners are even treated like royalty: mobile phones and drugs are delivered by drone right to their cell window. Photos obtained by La Presse show how prisoners manage to modify the windows of their cells to receive flying packages.

“We have a significant number of non-functioning cameras in Bordeaux due to broken windows,” lamented Mathieu Lavoie. 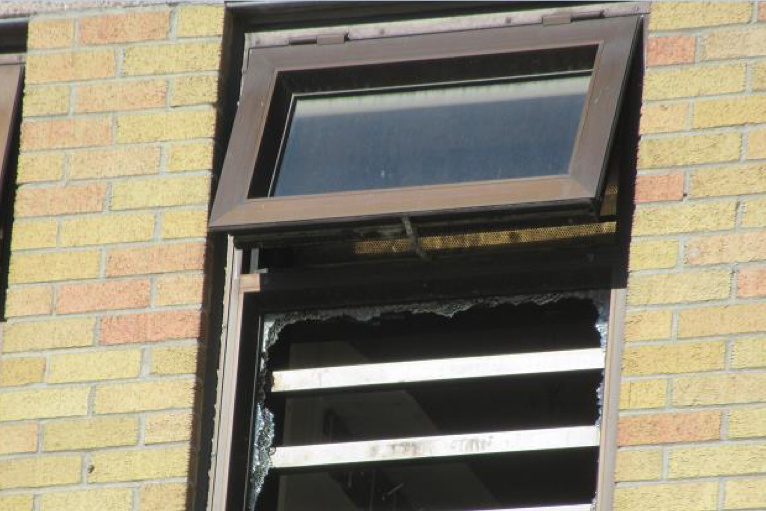 Last year, almost two drones were spotted near Quebec prisons on the island of Montreal every day. This is almost three times more than in 2019-2020, when 225 drones were recorded, according to data released during the study of NA appropriations. 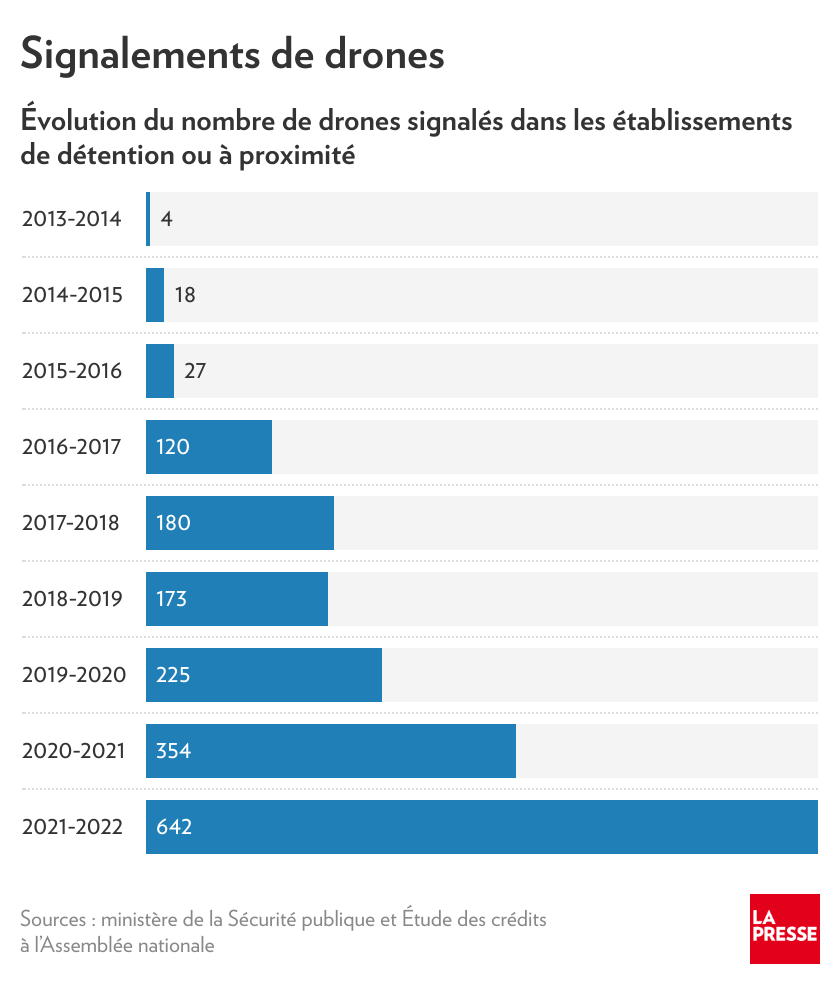 The corrections union estimates that less than a third of the drones are discovered due to a lack of technical equipment. Despite the explosion of the problem, detection devices that are faster or can prevent drones from flying over prisons have not been deployed, laments union president Mathieu Lavoie.

In contrast, the Ministry of Public Security boasts of implementing mobile drone detection technologies in some prisons as of October 2018 and guarding 21 open yards, in addition to protecting windows. The Ministry ensures that steps are being taken to install new systems in the three institutions it gives priority to.