Facebook Twitter LinkedIn
In order to avoid having a competition without films, the Academy of Oscars changed the rules for 2021 by making eligible films that have not been released in theaters, opening the door wide to streamers. In fact, in a normal year, films intended to be broadcast on SVOD must have been shown for at least one week in cinemas. What happened in 2021 may not happen again in 2022, even though the Oscars are of strategic importance to streamers led by Netflix. The ceremony has become in three years an imposed figure for the actors of the SVOD. In a recent interview with the Wall Street Journal, Scott Stuber, Netflix’s cinema boss said: “We can actually achieve the things you dream of. We all want to be recognized by our peers as the best in the class. When I started, we had never been nominated. It’s a great achievement and it’s hugely beneficial to the company, not only in recruiting artists, but also in making sure our clients know we’re trying to get the best. ”

With 24 nominations in 2020 for 2 awards, the teams of Reed Hastings and Ted Sarandos hoped to do better in 2021 since Netflix had obtained 36 nominations for 17 programs, was present in 22 of the 23 categories, a new record for a streamer, with 2 nominations for Best Picture with “Mank” and “The Trial of the Chicago 7”. In the end, Netflix returns to Los Gatos with 7 statuettes for 5 films, but neither for the best film which goes to Nomadland nor for the best roles. “Nomadland” achieves a historic treble: best film, best director for Chloé Zhao and best actress for Frances McDormand. A film produced by Searchlight Pictures, a Disney group company that hit theaters on February 19 and has grossed $ 2 million in the US to date and is making the heyday of Hulu, a Disney SVOD service . David Fincher’s “Mank”, the most nominated film of the year with 10 nominations, therefore missed the supreme award but came away anyway with two awards for photography and production design.

Amazon collects two prizes: sound and editing for Sound of Metal. And Warner Bros won an Oscar with Daniel Kaluuya for “Judas and the Black Messiah”. Apple TV + did not win anything despite nominations for “Greyhound” and “Wolfwalkers” as did Hulu with “The United States vs. Billie Holiday ”which won nothing.

In the end, Netflix and Amazon Prime Video, the top two SVOD services in the world, walk away with 9 Oscars for 48 nominations between them. Disappointing for some, symbols of the evolution of the market for others, the fact remains that the streamers are weaving their web in Hollywood. In 2020, Netflix had won just two Oscars after 24 nominations: Laura Dern for the supporting actress for “Marriage Story” and “American Factory” for the feature documentary. In 2019, the company won four Oscars including three for “Roma” by Alfonso Cuarón. This year, Scott Stuber leaves with his hands full and has a pretty good track record: 13 Oscars in 3 years for a former DVD seller by mail, that’s pretty good.

Redistribution of cards in 2022

With the gradual resumption of theatrical activity in the United States, we already know that the 2022 ceremony will not resemble that of this year. New streamers have started, the day & date has become widespread and the majors intend to deprive streamers of the precious statuette next year. 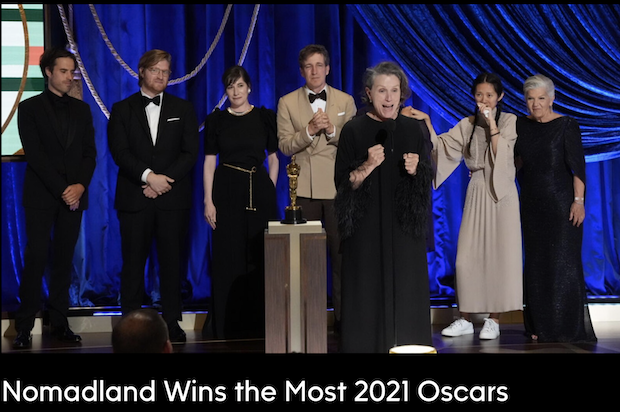 Extract from the 2021 Awards