“Who will understand the movement of the clouds?” poor Job was perplexed even in the Old Testament (Job, 36, 29). Two thousand five hundred years later, there is nothing new under the sun: it is often difficult to identify these air waves, much less explain their formation. The combination of temperature, pressure, humidity and wind force gives these water condensations numerous and often surprising forms.

But in order to recognize them, they still have to be classified. We are indebted to the British pharmacist Luke Howard in 1802 for the first names: cirrus (curl of hair), stratus (extensive) or cumulus (cluster). In the same year, the Frenchman Lamarck, for his part, speaks in the language of Molière about “demons”, “runners”, “unfinished”, “notices” or “in tatters”. Latin will prevail…

Depending on the height and shape of clouds, meteorologists have divided them into ten types that the World Meteorological Organization (WMO) has been describing since 1975 in its International Cloud Atlas, revised in 1985, and then in 2017, and now in free access on the Internet. In our temperate regions, below 2000 meters above sea level, we find stratus clouds in mostly gray and uniform layers, stratocumulus clouds in the form of gray and/or whitish spots or layers, cumulus clouds with a horizontal base that rise like flowers cabbages, and the densest and most powerful, towering cumulonimbus clouds. Between 2000 and 7000 meters, layers of altocumulus clouds form, consisting of small filamentous white clouds, separated or not separated from each other, homogeneous layers of altostratus clouds, which allow the sun to filter, and nimbostratus clouds, sources of heavy rains. Between 5,000 and 13,000 meters are narrow white bands of cirrus, cirrocumulus, composed of very fine granular or folded elements, and veils of cirrostratus, which are very extensive and often halo.

A cloud atlas is to meteorologists what a multiplication table is to mathematicians. Since 1975, the date of its creation, it has been a cultural base for meteorological engineers. However, it is not used directly for forecasts: today, digital modeling used to compile bulletins requires, first of all, a huge amount of numerical data, 95% of which comes from satellite observations, and the rest from temperature, wind speed, hygrometry readings. and pressure received from the ground by professional and amateur weather stations.

But the shape of the clouds present in the sky determines global weather patterns, and this is where Atlas comes to the rescue. “Amateur photography complements satellite imagery with the precise detail it provides,” says Jessica Taylor of NASA’s Langley Center in the US. The physicist is the scientific director of the Globe Observer project, which involves 220,000 teachers, students and ordinary citizens. The International Atlas is a reference for all these volunteer scientists when they want to know the nature of the cloud they have photographed.

These ten genera can be divided into several species depending on the morphology and structure of the clouds. Thus, a cirrus can be uncinus if it is in the form of a comma or ends in a parenthesis. But still fibratus if it is represented by straight filaments, spissatus if it is dense enough to appear grey, castellanus if it ends up in jagged coils. The same species can belong to two different genera, and thus we find cirrus fibratus and cirrostratus fibratus. These genera and species may even be embellished with adjectives denoting varieties which themselves sometimes have features. Real Russian dolls!

Some unusual features have been officially recognized by the WMO since 2017, as well as a species, the whorl, which Australians call morning glory because it often appears in the morning. This cloud, belonging to the altocumulus genus, resembles an aerial steamroller. It appears as a long, isolated, tubular, horizontal cloud mass that often slowly wraps around a horizontal axis. “When two winds collide with each other, eddies appear at the level of the front, which form these sausages,” explains Sebastien Laflorenci, a lecturer at the National School of Meteorology. These are not only in Australia. I already saw it in Toulouse!”

A curl in a roll and in a single piece occurs along the front formed by two opposite winds. It is observed both here in Argentina and in Australia – under the name morning glory – but also in Toulouse! 1 credit

Although it is thermodynamics – differences in temperature and pressure, as well as wind speed – that determine the shape of clouds, only dynamics, thanks to the wind, reveals its share of spectacular formations. So are those lenticular clouds of a species belonging to the cumulus genus, often seen on mountain tops… and sometimes mistaken for UFOs because of their flying saucer shape. They occur when the wind blowing at the summit creates a pressure drop on the ascent and then an increase on the descent. At the point where pressure and temperature reach the dew point, water vapor condenses into small droplets, forming a well-defined cloud. “We can also see how lenticular appear without a mountain,” notes Sebastian Laflorency. “Sometimes we see them on top of certain cumulus clouds that act as terrain. The hats that in ancient Rome covered freed slaves. 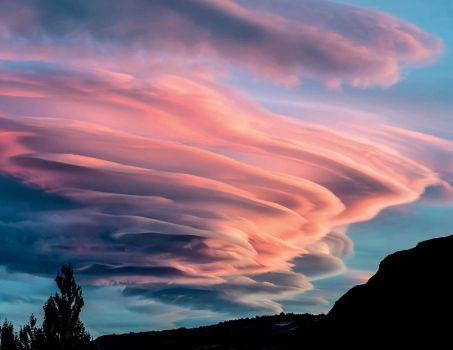 Lenticulars appear on mountaintops, as here in Patagonia, Argentina, when the wind blowing on top causes a pressure drop on the way up and then an increase on the way down, forming this characteristic cluster. Credits: ALEMI/PHOTO12

One of the “features” listed in 2017 concerns altocumulus. This is asperitas (brutal in Latin), a feature of the undulatus variety (in the form of waves) due to the undulations observed under the base of the clouds. “It looks like a stormy sea when viewed from below,” describes Sebastian Laflorency. “This is the effect of air flow, which, like any liquid, behaves chaotically.” According to the International Atlas, the spectacular visual effects that these formations, also known as “rivers of the sky”, can offer are due to subtle differences in brightness and thickness. On the other side of the clouds, fluctuses are waves that form not at the base, but at the top of stratocumulus clouds, a consequence of instability due to the variability of wind speed, since breaking waves are the action of wind in the sea.

Fluctus, from the Latin for “wave”, form at the top of a cloud when, under the influence of strong high-altitude winds, a mass of warm, dry air moves faster than the cold lower layer. Credits: CATERS/SIPA

Finally, the most bizarre clouds are undoubtedly those from which mammatus or mamma hang, associated with many genera (cirrus, cirrocumulus, altocumulus, altostratus, stratocumulus, cumulonimbus) and evoking associations with the chest. In the case of cumulonimbus clouds, these protrusions are due to downward air currents leading to the collapse of the cloud towards a very dry zone where the bottom part evaporates, which lowers the temperature due to the energy required for this transformation. The bottom layer undergoes this transformation unevenly, it creates convective movements, forming these mesh balls that seem to hang.

A cavity denotes an open area, either circular or linear, within a thin cloud layer. Here is the groove created by the dissipative drag of the aircraft. Credits: Bobby Boytot / International Cloud Atlas

Thus, everything that affects the atmosphere, to a greater or lesser extent, participates in the formation of clouds … including humans! Evidence can be given from the thermal plumes of power plants – nuclear and coal – or persistent traces of condensate left by aircraft, which form homogeneous feathery formations. “I studied the cloud created by a rocket launched on February 23, 1971 at sunset into the upper atmosphere,” says Jean Dessens, former director of the center for atmospheric research in Lanmesan (Hauts-Pyrenees). so high that it looked like “argent polar clouds” that glow at night. A rare event. “The most bizarre clouds are those that we create ourselves,” the researcher adds. This is what he did with his team to reduce the size of the hailstones that regularly damage crops in the Pyrenees. He tried to create instability in a column of hot air by sending flakes of silver iodide into it to multiply the number of hard nuclei around which the water is fixed, and thus reduce the size of the hailstones, and also the trained ones. In twenty years clouds have formed, but rarely rain and even more rarely hail.

“At least it allowed us to study droplet formation in situ,” he recalls. As for the subtle understanding of clouds, that is another matter. The fluid mechanics that governs their formation is a non-linear science. We cannot predict their long-term evolution, so the equations are chaotic: a very small difference in the data leads to very different simulation results in a short time. Job was probably right.

Influence the clouds to make it rain? It’s a geoengineering principle that its proponents tout as a means of changing the weather. And for different purposes. The United States sent silver iodide flakes into the clouds of Vietnam from 1967 to 1972 to increase the size of the droplets, which caused artificial rain. Their purpose? Stop the Viet Minh advance. A less belligerent China sprayed silver iodine into the Beijing air ahead of the 2008 Olympics to avoid spoiling the opening ceremony and reduce pollution. Since then, she has continued to follow this path. Thus, in 2020, the company announced an increase in the “rain modification” area by 5.5 million square kilometers by 2025.

Others want to make it rain without good weather to bring down the temperature. Indeed, clouds reflect part of the solar radiation, which then does not reach the lower layers of the atmosphere, which reduces the greenhouse effect. But is it really that effective? This geoengineering is dubious. Some only want to see positive effects in the short term, others accuse its proponents of being sorcerer’s apprentices because the fluid mechanics that govern climate evolution are so difficult to control.