Stock market baptism of fire this morning for OVHcloud. In the Parisian market this Friday, the OVHcloud share was above its initial price of 18.50 euros. The course went up to 20 euros. A morning increase that raises the valuation to 3,650 million euros.

The group founded by Octave Klaba had announced the previous day the success of its initial public offering (IPO) on the Euronext Paris market.

OVHcloud raised 350 million euros during this operation, through the sale of new shares. 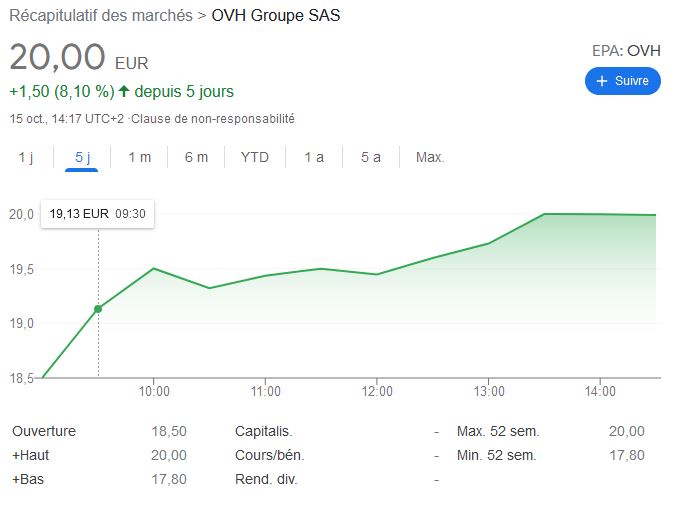 At the end of the IPO, the founder and his family will remain largely the majority, with around 70% of the capital.

The Company intends to use the proceeds from the issuance of shares to finance its growth strategy, including in particular the financing of its geographic expansion and the construction of data centers, the development of new products and, where appropriate, any external growth operation.

At the end of the IPO, the founder and his family will remain largely the majority, with around 70% of the capital.

“We made this presentation to honor all those who believe, like us, in the same dream of building a European alternative, a cloud provider, for Europe,” said Octave Klaba during the opening ceremony at Euronext, in the presence of the Secretary of State. for the digital transition, Cédric O.

“The start of a new development sequence for our company”

“The successful IPO of OVHcloud marks the beginning of a new sequence of development for our company. This operation provides us with additional resources to accelerate our growth and strengthen our position as European champion and pure cloud player, while supporting our international expansion and strengthening the relationships of trust that we maintain with our stakeholders ”, argues the manager general. Michel Paulin.

French politicians often present OVHcloud as a European alternative to the American giants that dominate the sector.

“It is a great day for French and European sovereignty. We want to become champions here, “said Cédric O.” We had Believe a few weeks ago, now we have OVH, and we hope to have many more. “