The Perseverance rover has been exploring the planet Mars for 18 months. On board, in addition to various monitoring and analysis instruments, it carries a small device designed to extract oxygen from the Martian atmosphere: MOXIE. Slightly larger than a shoebox, this device was developed by researchers at the Massachusetts Institute of Technology. Today, the team reports their first results, which bodes well for a future manned mission to Mars.

The Martian atmosphere is mainly composed of carbon dioxide (about 95%). MOXIE (In-Situ Oxygen Exploitation Experiment) is able to produce oxygen by electrolysis of CO2 solid oxide. From the rover’s landing in February 2021 until the end of 2021, the device produced oxygen seven times, day and night, and under varying atmospheric conditions. With each challenge, he achieved his goal of producing at least 6 grams of oxygen per hour, the production capacity of a small tree on Earth.

A larger MOXIE will contribute to sustained human exploration of Mars. Sent to the Red Planet ahead of a manned mission, the craft would be able to produce enough oxygen to meet the needs of the astronauts on site, as well as to power the rocket that should bring them back to Earth. The recent performance of MOXIE brought us one step closer to this goal. “We learned a huge amount of information that will be used in future larger systems,” said Michael Hecht, principal investigator of the MOXIE mission at MIT’s Haystack Observatory.

Functional system in any conditions

MOXIE, which is currently on Mars, has a minimum size – it can actually be loaded on the Perseverance rover. It was also designed to only work for short periods of time. However, the tiny device has demonstrated that it can reliably and efficiently convert the Martian atmosphere into pure oxygen. And this feat is truly historic: it is the world’s first demonstration of the real use of the resources of another planet and their transformation into something useful for Man.

How does he act? It starts by blowing Martian air through a HEPA filter to remove any contaminants. The air is then compressed using a scroll pump, heated to 800°C, and then sent through the Solid Oxide Electrolyzer (SOXE), a device designed and manufactured by OxEon Energy that splits carbon dioxide molecules into oxygen and carbon monoxide ions. Scandium stabilized zirconium ceramic electrolyte selectively transfers oxygen ions to the anode; they then recombine to form oxygen dioxide (O2), the quantity and purity of which is measured by MOXIE before being released into the atmosphere.

Each hourly stage of production requires several hours of warm-up; once its task is completed, the device turns off. MOXIE is designed to produce up to 10 grams of oxygen, or approximately 20 minutes of breathable oxygen per person. The researchers report that in 2021 it produced between 5.4 and 8.9 grams in each trial, for a total of almost 50 grams.

“A system like MOXIE scaled up a few hundred times (oxygen production 2-3 kg/h vs. 6-8 g/h for MOXIE) could produce enough oxygen to run the MAV. [véhicule d’ascension martien] designed for crew arriving 26 months late in the cycle,” researchers from Science Advances say. Note that each of the tests took place under completely different conditions. It was really important to ensure that the system worked optimally regardless of the time of year, season and atmospheric conditions.

Towards the design of Martian oxygen plants

Mars’ atmosphere is indeed much more variable than Earth’s: “The density of the air can change twice in a year, and the temperature can change by 100 degrees,” said Jeffrey Hoffman, MOXI’s deputy principal investigator. The team has yet to test how this works during the very early and late hours of the Martian day, when temperatures fluctuate wildly; this will be the last step of the demo. 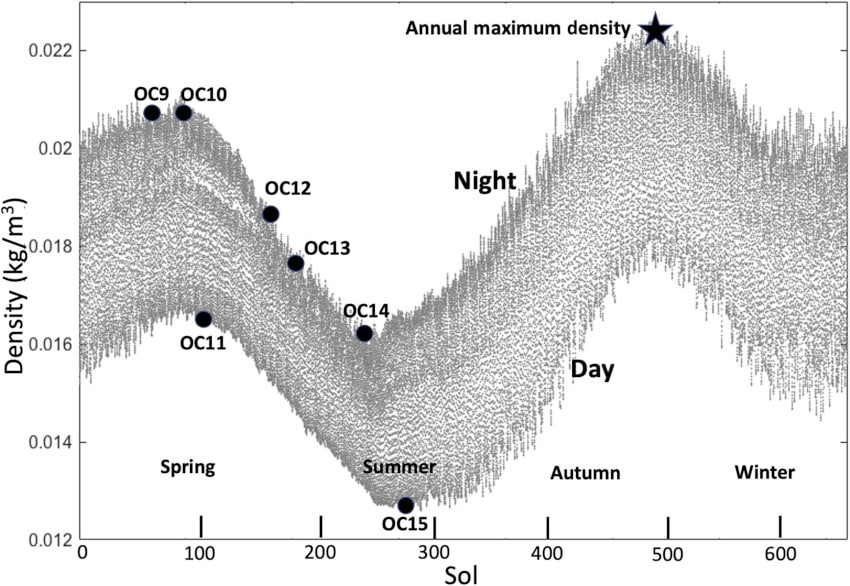 Engineers plan to expand the instrument’s capabilities and performance, especially during the Martian spring, when atmospheric density and carbon dioxide levels are at their highest. In the spring, some of the dry ice sublimates and the carbon dioxide flows cause giant dust storms. “So we’re going to set everything as high as possible and let the system run for as long as possible,” Hecht said. The goal is to pinpoint the limitations of the machine in order to build an even more robust system.

While a large scale system should ideally run continuously, this is not the case with MOXIE; however, its successive starts and stops that multiply thermal loads can damage the system over time. But if it remains functional, it means that a larger, continuously running system can run for thousands of hours – and thus ensure the survival of future astronauts. “In large-scale systems, there may be issues that MOXIE does not face, but much of the relevance to future systems was explored in the creation and operation of MOXIE,” the researchers conclude.

A small group of astronauts would need about one metric ton of breathable oxygen for a one-year stay on Mars, Hecht said. But we must add to this the amount of oxygen needed for the return trip: “In order to burn its fuel, a rocket must have a lot more oxygen by weight. Launching four astronauts from the surface of Mars on a future mission would require 7 metric tons of propellant and 25 metric tons of oxygen,” the researcher said last year.