A diversion channel to relieve congestion in Pakistan’s largest freshwater lake was breached and nearby villages had to be evacuated as more heavy rains on Monday added to the anxiety of millions of people affected by the worst floods in Pakistan’s history.

A third of Pakistan’s territory – an area the size of Britain – was under water after several months of record monsoon rains that killed 1,300 people and destroyed homes, businesses, roads and bridges.

The government has provided at least $10 billion for a country already in a severe economic crisis, while hundreds of thousands of people have been left homeless as the rainy season ends and winter is on the horizon.

“There is no place to shower or go to the toilet,” says Zebunnisa Bibi, who sheltered about 500 people who fled their flooded villages, in a camp near Fazilpur in Punjab province.

Such camps with tents sprang up all over southern and western Pakistan, where there were almost no dry places left to drain water.

In the southern province of Sindh, engineers had to dig a diversion channel to divert water from Lake Manchar, which was on the verge of flooding and threatened the cities of Sehwan and Bhan Saidabad, whose total population is approaching half a million souls.

Thousands of people had to be evacuated from flooded houses around the new canal.

“The flow of water has been diverted, but the threat is still far from gone,” Sindh Information Minister Sharjil Inam Memon told AFP on Monday. “We are doing everything we can to prevent more villages from flooding.”

Lake Manchar, located a few kilometers west of the Indus, varies in size depending on the season and weather conditions. But, according to the local population, it has never been as huge as it is today.

Most of the southern provinces of Sindh and Balochistan are simply vast expanses of water, where people crowd in a few elevated and still dry places, in particular on roads or railways. 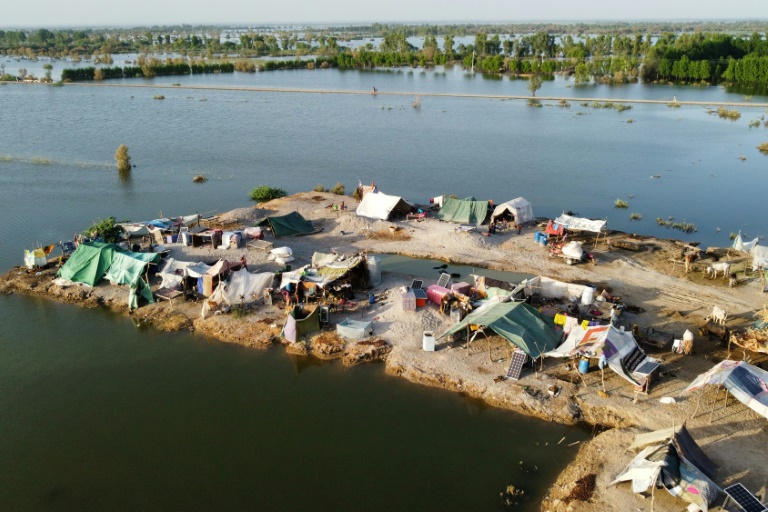 Human and animal feces in the foul-smelling water attract swarms of flies and mosquitoes, and outbreaks of dengue fever have already been reported.

A woman who was about to give birth in a camp in Punjab province told AFP she was in desperate need of medical attention.

“I need a doctor or a midwife. What will happen if something happens to my child?” Fahmida Bibi, a mother of five who is afraid to give birth in such an environment, worries.

The United Nations Population Fund (UNFPA) announced over the weekend that at least 128,000 pregnant women in flooded areas are in need of urgent care, and 42,000 of them are due to give birth in the next three months.

– Changing of the climate –

However, there have not been such heavy rains here for at least three decades. 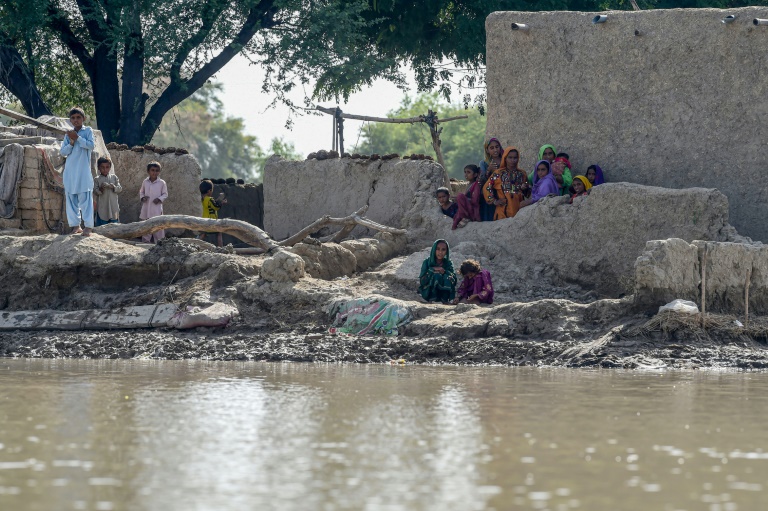 Islamabad blames devastating floods on climate change, which is increasing the frequency and intensity of extreme weather events around the planet.

It accounts for less than 1% of global greenhouse gas emissions, but is the 8th most at risk country for extreme weather events, according to a study by the non-governmental organization Germanwatch.

Within days, a major army-led relief operation is underway. But the government admitted that it was overwhelmed by the magnitude of the disaster and turned to the international community for help.