Since 2020, Comcast/NBCUniversal’s streaming service has struggled to find its place in a particularly dynamic competition. In 2020, Peacock made $118 million on a $663 million loss. In 2021, Peacock made $778 million, with a combined loss for 2020 and 2021 of $2.36 billion. For reference, Comcast executives have previously told investors they plan to invest about $2 billion in Peacock in 2020 and 2021. Separately, Comcast had forecast that Peacock would break even in 2025, but Mr. Cavanagh, Comcast’s chief financial officer, said that date could be pushed back beyond initial expectations. Which seems obvious with a $467 million loss at the end of June 2022.

Among the explanations given by Comcast leaders are mainly the consequences of the service’s programming, which affected the second quarter, which was very new compared to the first quarter, which included several big events: the Winter Olympics, the Super Bowl, but also the Bel Air program. The third quarter should once again offer a very busy program with several films (Jurassic and Minions) and sporting events such as Sunday Night Football, the Premier League and the World Cup in Qatar. Leaders also remain very confident in Peaock’s dual revenue model of subscriptions and ads. Indeed, Peacock offers three subscription plans: completely free, fully ad-funded, a $4.99 version with fewer ads, and a $9.99 ad-free version. 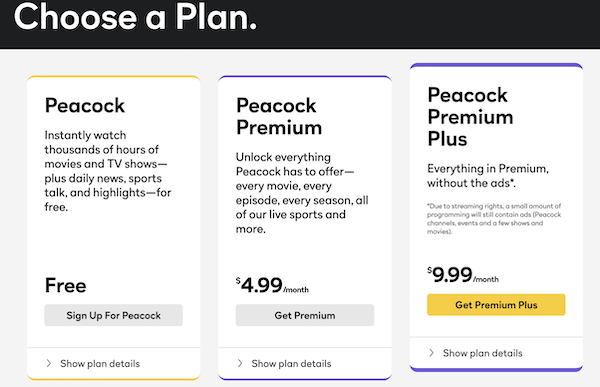 By playing on multiple fronts, Peacock is limiting the risk that paid subscriber recruitment will peak at a time when the economic and competitive context in the United States is starting to weigh on the streaming market.