A new feature in Photoshop can quadruple the number of pixels in a photo using artificial intelligence (AI). Called “Super Resolution”, it will also soon be integrated into Adobe Lightroom. The technology examines the details of a photo and then predicts how to enlarge it based on similar details found in millions of other shots.

This process is useful when it comes to printing large format photos or zooming in on certain parts of a scene. Super Resolution is able to double the width and height of a photo. For example, a 12 megapixel image taken on a smartphone goes up to 48 megapixels. A crop of just 2 megapixels becomes a more usable 8 megapixel. ” If you want to make a large print to display on your wall, the extra resolution helps keep edges crisp and detail intact », Explains Eric Chan, programmer for Adobe.

Image purists might balk at using technology that extrapolates its own image data. However, keep in mind that increasing the resolution of photos has been a staple of Photoshop for decades, albeit with less sophistication. And many other standard processing tools also change images significantly with respect to color, contrast, sharpness, noise reduction, and more.

In the case of Photoshop’s Super Resolution, Adobe trained its AI on pairs of images, one at full resolution and one at half resolution, in order to teach it how to magnify photos. ” We focused our learning efforts on difficult examples: image areas with a lot of texture and small details, which are often susceptible to artifacts after being resized. », Specifies Eric Chan. 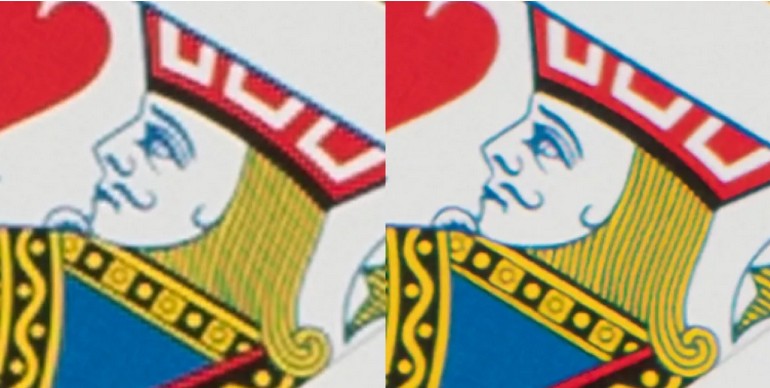 On the right, the enlarged image is of better quality when processed with Super Resolution than with the classic Photoshop bicubic algorithm

The function is integrated into Photoshop’s Camera Raw tool, accessible by right-clicking, then selecting “enhance”. Adobe recommends that photographers check sharpness and noise reduction settings that may need to be adjusted on the enlarged image.

The technology works using GPU technology that can boost AI tasks on personal computers: CoreML on Macs and Windows ML for Windows systems. A high-performance graphics processor can significantly speed up the image processing process, from minutes to seconds.

Adobe Photoshop is THE best-known and most coveted computer-assisted editing, processing and drawing software, it lets you make your dreams come true and more.

Adobe Photoshop Lightroom is photo editing and enhancing software that comes with a lot of features. It is suitable for both novices and experienced users.