At CES 2023 in Las Vegas, Japanese company Sony introduced this Thursday, January 5, a new controller for PS5, adapted for people with disabilities.

TECHNOLOGY – So far, Sony has not had controllers suitable for gamers with disabilities. This Thursday, January 5, on the occasion of CES, an electronics show held in Las Vegas (USA), a Japanese company introduced its “Project Leonardo for PlayStation 5”: a controller that aims to improve and facilitate the gaming experience for people. with restricted abilities. However, neither its price nor release date has been specified.

More flexible, this dedicated controller allows Sony to overcome many of the challenges faced by gamers with limited motor skills: “In particular, the inability to hold the controller for long periods of time, press keys or triggers accurately, or position thumbs. and fingers on a classic controller,” Sony said in a press release.

The controller can be attached to a tripod or chair

The Leonardo project was developed with the participation of disability experts, as well as interested players, associations and game developers, the company continues on its website. “Our team has tested over a dozen designs in collaboration with accessibility experts to find a way around major barriers to optimal controller experience,” said Sony Interactive Entertainment designer So Morimoto in Las Vegas.

Thus, the shape of the controller is completely transformed, as you can see in the photo below. The Leonardo project is very far from the classic tablet and more like an “old-fashioned joystick”, explains the specialized publication Les Numériques. 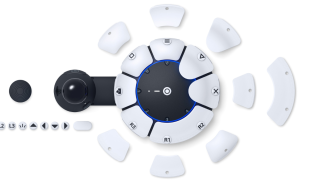 The new Sony controller for PS5 is adapted for people with disabilities.

If players can still grab the controller, it can also be mounted with a tripod and is AMPS compatible, for example, to fix it to a wheelchair.

Other changes have also been made to the buttons used during the game, their position and role have been revised: they “can be programmed for any supported function, and multiple buttons can be assigned to the same function,” Sony clarifies.

As the daily newspaper Ouest France reminds us, Sony was waiting in the matter of new technologies adapted for people with disabilities. While its games, particularly those from studios such as Naughty Dog (The Last of Us, Uncharted) and Santa Monica Studio (God of War), have been repeatedly acclaimed for their accessibility, Sony has never yet developed a dedicated controller for gamers. with disabilities, recalls BFM TV.

Competitor Microsoft has taken the lead with the adaptable controller and Xbox Accessibility Guide, explains West France. This is a charter of recommendations for video game developers and designers.

If you are not in either of these two cases, please contact us at aide@huffingtonpost.fr.