The Motorola G200 5G smartphone at 550 euros on Amazon

Motorola wants to revolutionize the high-end telephony market with its Moto G200 5G at a modest price of 549 euros. Powered by the premium Snapdragon 888+ 5G mobile platform, the Moto G200 features two SIM slots and a large capacity battery. The screen is large and offers a 144Hz refresh rate. So what are the downsides? 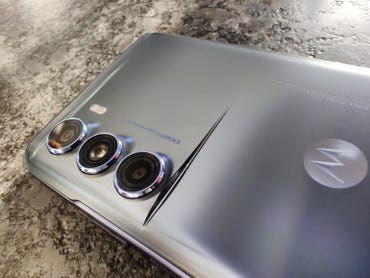 Plastic is very present. But the back of the device is still quite nice. It has a nice dull gloss and a quirky molding around the triple-camera array. The camera lenses protrude considerably from the back, and a pair of curved horizontal lips cleverly take advantage of this.

Unfortunately, these lips don’t prevent the phone from wobbling on a desk when the screen is pressed. They are also completely hidden by the large transparent bumper that is attached to the phone. If Motorola could expand this design of its back with metal, the bumper could be eliminated and the back of the phone could be a real talking point. But of course the phone would be more expensive.

The phone I tested came in Stellar Blue, which looks more like a lavender color in certain lighting conditions. There is also an ice green option. 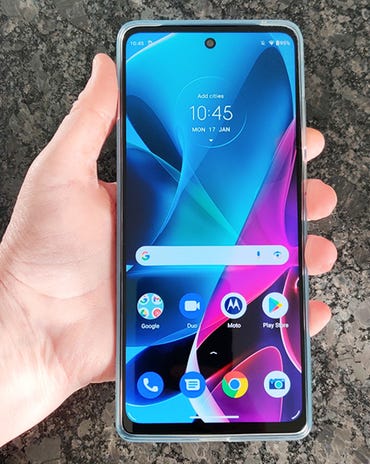 The screen is very large, measuring 6.8 inches diagonally. The device itself measures 75.53mm wide by 168.07mm deep and 8.89mm thick, and weighs 202g, and that’s not including the rugged bumper.

So this is a phone that many people will struggle to use with one hand, and it’s likely to be too big for some pockets. The Moto G200 has an IP rating for dust and water resistance, but only IP52, which means it’s “protected against dust” and can withstand “drips of water.”

The fingerprint sensor is built into the power button on the right side, next to the volume rocker. On the left edge, you’ll find a Google Assistant button. There is no 3.5mm headphone jack.

The high-end Snapdragon 888+ chipset is backed by 8GB of RAM, so using the smartphone is a breeze. The 128 GB of internal storage has been reduced to 112 GB by the combination of Android 11 and some elements of Motorola. There’s no bloatware here, which is welcome, especially since there’s no MicroSD card slot for adding storage.

The Moto G200 has a large 5,000 mAh battery. To give an example, after three hours of watching videos on YouTube, the battery went from 100% to 82%, which is equivalent to approximately 17 hours of battery life. Impressive. My battery usually lasts more than a day with normal use. Motorola claims “up to 1.5 days”. Charging (33W) is fast: it took 15 minutes to go from 11% to 42% and 45 minutes to reach 88%. Wireless charging is not supported.

The Moto G200 is a good phone for its price. With a large, high-quality display, high-end processor, good battery life, and no bloatware, it looks like a good option for anyone looking for a mainstream 5G device. The sleek rear plate will be hidden by the bumper protection provided, which is a shame, but overall, in terms of value for money, the Moto G200 is impressive.