The duration and coverage of the guarantees offered by the manufacturers were very uneven 30 years ago. Despite a notable improvement, this is still the case today.

It may sound incredible today, but in the early 1960s, manufacturers generally offered a three-month or 5,000-kilometer warranty on a new vehicle. In the early 1980s, warranties were longer: Chrysler, for example, offered coverage for five years or 80,000 km (only for certain vehicles). When the first Protégez-Vous Auto Guide was launched in 1989, several vehicles were still being sold with a basic warranty of one year or 20,000 km.

This is the case, among others, of the Ford and Suzuki models. On the contrary, Mercedes-Benz offers a guarantee of four years or 80,000 km, very advantageous for the time. Thirty years ago, a basic warranty lasted an average of three years or 60,000 to 80,000 km, which is still the industry standard. In addition, today the powertrain is guaranteed for five years or 100,000 km, which was less common three decades ago.

However, this represents a setback for several manufacturers, who have reduced some coverage. To measure the evolution of the guarantees offered, we have listed the coverages shown in 1989 and in 2017 alongside.

We tend to forget it in the automotive field, but know that the Consumer Protection Law (LPC) and the Civil Code protect you even if your vehicle is no longer covered by the manufacturer’s warranty. Both are applied automatically and free of charge as soon as you buy or rent a vehicle from a professional. Once purchased or rented, the vehicle must be usable for its intended use.

It must not contain any hidden defects, that is, a significant defect existing before the sale, which you could not detect despite your prudence and which would have made you reconsider your purchase decision. Finally, the vehicle must have a “reasonable useful life”, taking into account the price paid, the contract and the conditions of use. For example, imagine that a defective electronic control module under warranty is replaced free of charge by the manufacturer.

Then two years later, the same module stops working when your vehicle is no longer covered by the manufacturer’s warranty. In this case, the legal guarantee applies and the manufacturer or the dealer must take care of the new repair. The same is true if you see a vehicle “sold as is” or “sold without warranty” by a professional. The latter cannot evade the law even if it explains otherwise. Finally, the LPC also states that spare parts and repair services must be offered for a reasonable period of time. For more information and help, visit the website of the Office de la protection du consommateur (OPC). 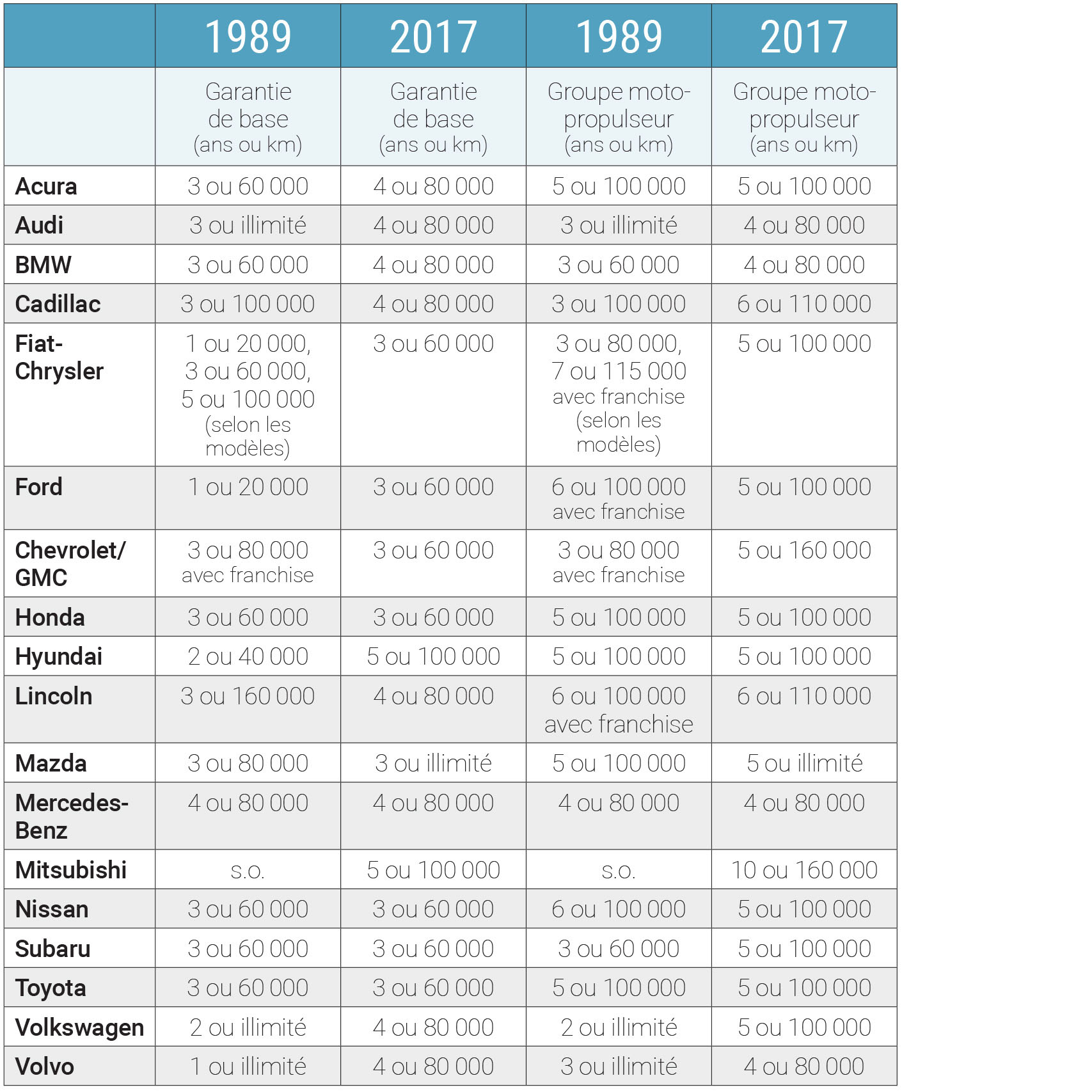 Tampered odometers, cars sold without warranty, questionable track record – it was harder to thwart the pitfalls of the occasion 30 years ago. The situation is much better today, thanks to a healthier and more transparent second-hand market. That said, it is still essential to take the usual precautions before buying a used vehicle.

In the late 1980s, you were more likely to buy a lemon than today. “Thirty years ago, it was still the case that dealers were selling used vehicles, wrongly claiming that no warranty was applied. The law already prohibited it, but some unscrupulous professionals abused the trust of buyers, “explains George Iny, president of the Association for the Protection of Motorists (APA). In fact, such a claim is false, since legal guarantees apply to all goods sold by a merchant. Fortunately, this practice is no longer used today.

Odometer kickback was also a major issue at this time. According to data compiled by the APA, half of the vehicles on the road in Quebec in the early 1990s had their odometer delayed at least once before being scrapped. The tampered odometers obviously still exist, but are now less easy to camouflage. In fact, for vehicles registered since 2001, the Société de l’assurance Automobile du Québec (SAAQ) indicates the mileage at each change of ownership. Consumers who apply to SAAQ to register a vehicle (see below) can find out what their mileage was when it was purchased by the previous owner. This does not eliminate the possibility of fraud, but it does add additional stress to dishonest sellers.

Finally, since 2015, the Office of Consumer Protection (OPC) has issued permits for merchants who sell, rent long-term vehicles or recycle. “The fact of being able to grant or not a license and being able to deny its renewal constitutes an additional means of controlling the good conduct of merchants. In the long term, this will allow a better monitoring of the industry ”, explains Charles Tanguay, spokesman for the OPC.

Thanks to various measures implemented over the years, it is now easier to piece together a vehicle’s history. Even if you buy a vehicle from a professional, learning more about the history of the coveted model could be of great use to you. Before signing, ask the SAAQ for the vehicle file ($ 12) to know the number of previous owners, the evolution of the mileage and the complete history (rebuild, accidents, old taxi, etc.). The vehicle identification number (VIN or VIN) is sufficient for the SAAQ to find the data that concerns you from your first registration in Quebec.

Still using the VIN, you can buy a Carproof report ($ 45- $ 60), which will give you the history of the vehicle in Canada, but also in the United States. The information provided is not always complete and some accidents can escape Carproof, but such a report could give you some interesting clues not to buy a lemon. If, for example, the coveted vehicle, initially registered in Florida, Louisiana, or Texas, was imported into Quebec in the fall of 2017, beware: it could be a flooded vehicle!

Vehicle inspection: always a must

We cannot repeat it enough: it is essential to have a used vehicle inspected before you buy it. You can call a trusted mechanic, but also CAA Quebec or APA, who offer inspection services. Thanks to a thorough examination of the vehicle, technicians are able to detect accident traces, detect repainted body panels or indicate parts to change (tires, brakes, shock absorbers, etc.). This may allow you to negotiate the price down or not buy a vehicle other than what the seller said.

Even if the coveted car is sold by a professional, since 2006 the latter has no right to refuse a test drive or an independent inspection without a valid reason. A refusal on your part suggests that you have something to hide: therefore, it is better to buy another vehicle elsewhere. Since 2006, the decree on the application of standards of conduct to used car dealers has contributed to improving the second-hand market by more severely regulating, among other things, the display of prices, sale of lots, fake auctions and advertising. Finally, dealers are required to place a label on each used vehicle that contains the most important information about it (price, mileage, full description, etc.). It also helps consumers make an informed decision.

To avoid their obligations, some professionals pose as individuals. To unmask them, you can ask a deliberately vague first question. Begin by saying, “I’m calling for the car. »If the seller answers« Which one? It is that it sells several at the same time. So it is a safe bet that it is a particular fake. Some ad sites allow you to view ads from other sellers. It can also be a good way to unmask a particular fake. Does the seller sell multiple cars at the same time? Does he not want to receive you at his house? Are you selling the car for someone else? These answers should also spark your vigilance, because many bogus people sell vehicles in poor condition or with questionable records.

The warranty “follows” the vehicle

Buying a recent used vehicle that is still warranted? Remember that the warranty continues even if the car changes ownership. It is also important to note that a dealer who wants to sell you an extended warranty must first inform you that legal warranties also apply to vehicles (see page 6), even if this is not systematic in practice. And since 2009, the Consumer Protection Law (LPC) has improved as it specifies that “the merchant or the manufacturer cannot require the consumer to prove that the previous owners or tenants of the property have complied with the conditions of the guarantee.” Some builders cite the previous owner’s lack of track record to avoid taking care of certain issues under warranty, a prohibited practice in Quebec.

In case of dispute

If you are not satisfied with your vehicle or with the repairs that have been made, the first thing to do is try to get a settlement. If dialogue results in agreement, you save energy, time and money. On the other hand, if you find yourself at a standstill, contact the OPC, who can help you assert your rights. The APA is also a resource you can turn to for help.

If the dispute is for $ 15,000 or less, you can sue in small claims court. Its operation is simple and the parties are represented without a lawyer, which significantly reduces the cost of the procedure.

It is also possible to opt for the Canadian Motor Vehicle Arbitration Program (CAMVAP). Most of the major manufacturers are involved, with the exception of BMW, MINI and Mitsubishi. Unlike small claims, it is possible to be represented by an attorney, which is also recommended. Obviously this has an impact on the cost of the process. If arbitration is in your favor, you could get reimbursement for costs incurred, repair of your vehicle at the manufacturer’s expense, and in certain extreme cases, buy-back of your vehicle! But before you start, you should know that CAMVAP is for owners or lessees of recent vehicles (four years or less than 160,000 km) and that the arbitration is final. Therefore, there is no recourse if you are unsuccessful in CAMVAP.