Game news PS5: More than a surprise change for Marvel’s Spider-Man 2, the sequel to the PlayStation exclusive!

It’s been a while since images of Marvel’s Spider-Man 2 flattered our retinas. We remember his appearance during the PlayStation Showcase in September 2021 with great nostalgia, because since then there has been a complete lull. However, the developers have been encouraging in recent weeks, which leaves a lot of hope for the future! However, a rather unexpected change has recently been discovered.

Before Spider-Man 2, Peter Parker expands his web to other environments

In 2023, it’s time to find Spider-Man! Exactly when, unfortunately, we don’t know yet, and that’s what may have worried fans of Marvel’s first Spider-Man and Miles Morales spin-off, also coming to PC tomorrow. However, the developers stepped up to reassure each of them: there’s nothing to be done, everything goes on as usual. And then, for now, especially in September – which isn’t that far away – the news seems great for Marvel’s Spider-Man 2, even if its formalization and first meeting with a public date there is over a year ago. 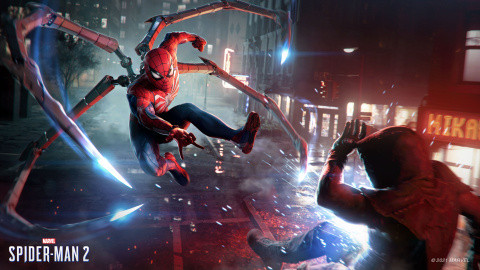 As mentioned above, the license is using this development time to expand its audience, because from tomorrow the entire franchise created by Insomniac Games for the PlayStation ecosystem will be available on PC. Is there a way to build fan base before Marvel’s Spider-Man 2? Possible. At the moment, we don’t know yet when the new video presentation will be released, but on the part of the players, we are longing! Today we got new information about this sequel on PS5 and we must say that we did not expect it. Ditto for fans who don’t necessarily have to love this kind of news that suggests amazing changes.

The sequel to the franchise on PS5 will be different from Marvel’s Spider-Man!

It was on the social network Twitter that Internet users made a disturbing discovery. Voice actor Scott Porter, who voiced the character Harry Osborn in the first Marvel Spider-Man, will not be in the credits for this sequel. In a now-deleted tweet, the latter indicated that Insomniac Games was looking for someone who could better stick to the character. Because if he was just a minor character in the first episode, then things could have changed in this sequel without getting too into the details of the game. Here’s what Scott Porter was able to say about this change, which he influenced first. .

Although I voiced Harry in the first Marvel Spider-Man, unfortunately I won’t be in the sequel (…) Insomniac decided to opt for photographic reality and I think the age difference between me and Harry was too big to overcome it. I was disappointed, but I understood. It will be an amazing game.

This isn’t the first time Marvel’s Spider-Man has come under fire for such a change. Remember, there was a similar story when the Marvel’s Spider-Man remaster came out, which caused quite a bit of controversy. Indeed, Peter Parker changed his face, preferring the face of Ben Jordan, which better matched the facial image made by Yuri Lowenthal, rather than that of John Bubniak. As of now, Insomniac Games has not responded and has not yet given any clues about this casting change.