This is Digital Foundry, a British medium specialized in technologies related to video games, as well as in console tests. Weekly, members of the editorial team review the news. This week, Digital Foundry returns to the Switch update 13.0, to the iPhone 13 but also to the big update made by Sony to its PlayStation 5 last Wednesday. The latter brings a slight but welcome change in frame rate.

It is Richard Leadbetter who talks about it during this weekly report. While running various tests on different PlayStation 5 models, he realized that it was the release version that had the best performance of two games: Devil May Cry 5 and Control. After several questions, he concludes that it is the great update of the PlayStation 5 that increases the technical performance very slightly and not the hardware itself: 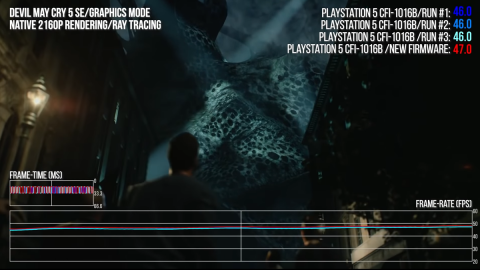 Richard Leadbetter insists on the fact that this is a very slight improvement, which only occurs in certain cases: he finds that it is often ray tracing (a feature that allows to reproduce the physical behavior of light, such as reflections) that is the denominator. common of these FPS pulses.

A welcome minor change, especially since it was never mentioned in the Sony blog post. Last week, the manufacturer unveiled the content of the second major update of the PlayStation 5. In addition to the convenience options added to the interface, two great novelties should be noted: it is now possible to integrate an SSD drive into the console (for expand storage and play your PS5 games on it). In addition, 3D audio is now available on televisions through an option that is enabled in the console settings.