Artificial intelligence is sometimes difficult to define on the PC, but on the smartphone it quickly becomes synonymous with two things, computational photography and how your phone processes voice commands. With Snapdragon 8 Gen 1, Qualcomm has improved on both vectors, according to Ziad Asghar, Qualcomm’s vice president of product management for its Snapdragon technology roadmap. The performance of the Hexagon has roughly doubled, Asghar said, and the memory available to the Hexagon has also doubled.

From a performance perspective, Qualcomm’s numbers have improved AI performance four times, with twice the performance of the tensor throttle and 1.7 times more energy efficiency, Asghar said. There will be support for 8-bit plus 16-bit mixed integers. What will be more interesting is what the artificial intelligence engine can do, such as ArcSoft’s video bokeh effects, improved natural language processing, and a new “Leitz Looks” filter from Ernst Leitz Labs that you can apply to photos to give them the appearance of Leica cameras.

A summary of the new AI capabilities of the Qualcomm Snapdragon 8 chip.
Related Articles

The Snapdragon 8’s Hexagon AI engine can also interface with the built-in 3rd-gen detection hub, with a couple of improvements that could look cool or very creepy. Asghar said Qualcomm is working with Sonde to develop technologies to listen to your voice as you speak to determine if you have a health problem such as asthma or coronavirus. Hugging Face’s natural language processing will scan your voicemail messages and apply sentiment analysis. Is it really important for your brother to talk to you?

AI is also being used with antenna tuning, which helps redirect the antenna signal path depending on how the phone detects that you are holding the phone. (This certainly sounds like a possible solution to the iPhone “antenna door” scandal, and Steve Jobs’ famous response: “You’re holding it wrong”).

Finally, Asghar said, Qualcomm is adding a “whole new experience,” the always-on camera system that represents a fourth ISP. What that allows you to do is incorporate entirely new use cases where your phone can be unlocked just by looking at it and “also avoid unnecessary glances at your screen,” Asghar said. Essentially, your phone will always be searching for your face, eliminating the need to “unlock” it.

Qualcomm may be walking a fine line here. Google Glass failed, in part, because users were never sure whether they were being logged or their behavior being tracked, and similar questions were asked of Facebook regarding the recent introduction of its own smart glasses. Some laptops have included privacy blinds on their webcams due to concerns, justified or not, that users may be illicitly logged on.

In response to a question about the ethics of an always-on camera, Asghar noted that Qualcomm tries “to make sure the data that’s there stays on the device.” All images captured by the camera will be saved on the device itself. “As you know, these are capabilities that add to experiences … and [we want] to make sure we have solutions that meet all the privacy parameters and everything, “added Asghar.

More importantly, Asghar said that he believed the always-on camera would be an OEM-enabled feature, meaning it will be up to the smartphone OEM to enable it and provide user controls to manage its use.

Qualcomm is calling its new ISP camera brand “Snapdragon Sight,” which represents what the Snapdragon 8 Gen 1 camera can do. You can take pictures, to be sure, but you can also recognize what the camera is taking pictures of. Last year’s Snapdragon 888 offered AI-based auto exposure and face detection, but the Spectra image signal processor in the Snapdragon 8 now performs intelligent face detection. That matters, according to Judd Heape, vice president of product management at Qualcomm, when the camera is asked to unlock the phone of a user whose face is partially obscured by a mask. The camera sensor can now map up to 300 “facial landmarks”, tracking your eyes, nose, mouth, cheeks, and more. for animojis and other apps where the camera has to map your facial expression. 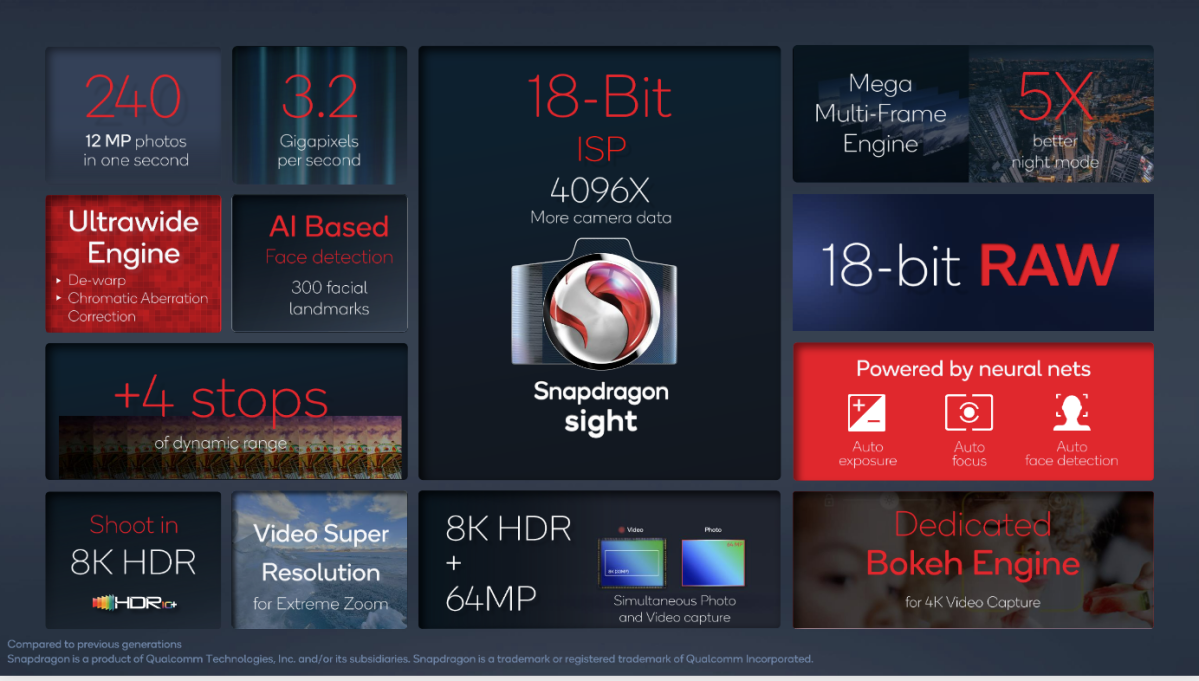 Smartphone cameras with Qualcomm Snapdragon 8 processors will also feature a dynamic range that has been increased by four stops, part of a move by a 14-bit to 18-bit ISP that will see the ISP capturing more than 4,000 times more data than before. or 3.2 Mpixels per second.

While the 888’s camera ISP allowed users to shoot 8K video, the 8K ISP will add HDR capabilities to that 8K video. There is also a dedicated hardware engine that will apply real-time bokeh to 4K video. In addition to the various still image capabilities mentioned in the specs, Qualcomm also developed “Panoramic View”, a 140-degree wide panoramic shot that can be captured in one shot, without the need to stitch photos together.

The AI ​​engine and the camera engine will work together to perform ultra-extreme zoom. It’s basically a digital zoom with smart interpolation to remove grain. Last year’s “night mode” with Snapdragon 888 stitched together about six frames to form a composite image. The Snapdragon 8’s camera will combine about 30 frames, delivering “five times better night mode,” Heape said. This is because every pixel in a night scene is tracked, so the camera can intelligently filter out pixel “shake” caused by hand shaking. The result will be a sharper, sharper image, he said. Finally, the company is using AI to remove chromatic aberration from wide-angle lenses.

Heape also provided a few more details on how the always-on camera works. Essentially, you will be able to automatically unlock your phone, but you will also notice when someone may be looking over your shoulder and alerting you. We have seen this before in the PC space. Lenovo’s “Glance” utility included with your ThinkPad X12 Detachable Gen 1 tablet, for example, blurs your screen if you’re not there. Dell laptops simply detect your presence and then turn on the Windows Hello-enabled webcam.

Qualcomm also showed a video of a cook leaning his smartphone against a mixer, then periodically bending down to unlock his phone and turn on the screen, displaying the recipe he was using. Your phone can also hide confidential notifications when someone else may also be looking at it.

Mobile gaming may not be something you think of when you think of mobile phones, well, nothing more than a casual round of Candy Crush. But the mobile versions of Player Unknown: Battlegrounds and similar games can also sell smartphones. Here, processing power and GPUs rule, just as they do with PCs. Essentially, GPU performance has increased by 30 percent inside the new Adreno, while power consumption has been reduced by 25 percent.

Qualcomm promises three improvements with the Snapdragon 8. First, a new Adreno GPU frame-shift engine that will essentially double frames at the same power consumption, or reduce power by up to 50 percent at the same frame rate. Second, the new chips will add “desktop-level volumetric rendering,” the executives said. Finally, the company promises a “professional” level version of variable speed shader, which will allow the GPU and display to be synchronized to provide “tear-free” games with fewer visual artifacts.

On the modem side, Qualcomm is putting together full mmWave and sub-6-GHz enablement, Asghar said. More importantly, Qualcomm is introducing 5G uplink carrier aggregation, where multiple uplink channels can be used simultaneously to improve upload bandwidth. The X65 modem will support 10Gbit 5G, CEO Cristiano Amon said, with a 3.5Gbps uplink, when the two technologies are added.

WiFi 6 and WiFi 6e are also being added, as is Bluetooth Low Energy (BLE) and support for CD lossless audio. Finally, Qualcomm is adding something called a “trust management engine,” which is designed to help users protect sensitive information. It will be compatible with Google’s Android Ready SE, which can be used for Android key provisioning, including digital keys for cars and homes, driver’s licenses, and digital wallets. You will even be able to mint and store NFT with Snapdragon 8, the executives said.

The Snapdragon 8 Gen 1 supports iSIM, eliminating the need for a physical SIM card or SIM tray. 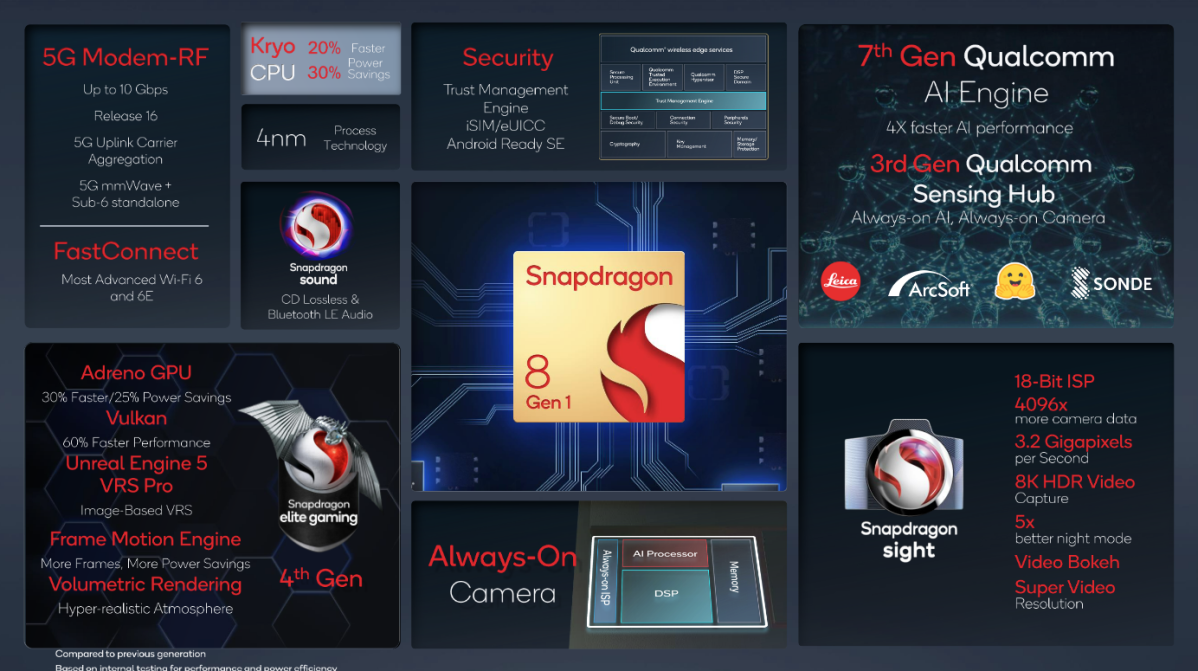 Qualcomm has yet to reveal if updates to its Snapdragon Compute line of PC processors are on the way. However, the company’s Snapdragon Tech Summit will take place on another day.

This story was updated with additional details at 6:34 pm