Razer may be a very typical “gaming hardware” brand, but it is releasing its first ultraportable for productivity and office automation: the Razer Book 13. It comes in three models, one with a full HD + screen (1200 pixels). ), an 11th generation Intel Core i5 processor, 256 GB of storage and 8 GB of Ram, another equipped with an ultra HD + screen (2400 pixels), with an Intel Core i7 1165G7, 512 GB of storage and 16 GB of Ram.

The one we tested is a bit halfway: it has an i7 and the Full HD + screen, which in the process becomes tactile and benefits from an anti-reflection treatment. In addition, it remains at 256 GB of storage but passes to 16 GB of Ram. This RazerBook 13 is trading at € 1,899. The whole question is whether it is worth them.

Where Razer particularly excels is in the highly polished and flattering aspect of its products. And the first contact with the Razer Book 13, quite enchanting, does not justify this reputation. Its very reasonable weight with 1.40 kg, its finesse (15.33mm thick) and its all-aluminum frame make it a very beautiful piece, with a sober look where nothing swears, not even the discreet backlighting of his keyboard. 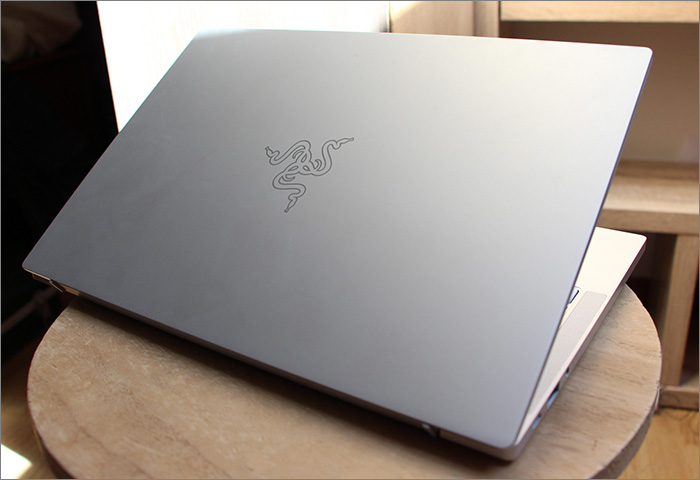 The keyboard, moreover, manages anti-ghosting and is associated with a Glass precision touchpad. The duo confirms this first impression of comfort: the Razer Book 13 is a precise PC, which we enjoy handling, and which is perfect for a work tool. The keyboard keys, apart from somewhat small “enter” and “backspace”, are spaced enough apart to feel comfortable. 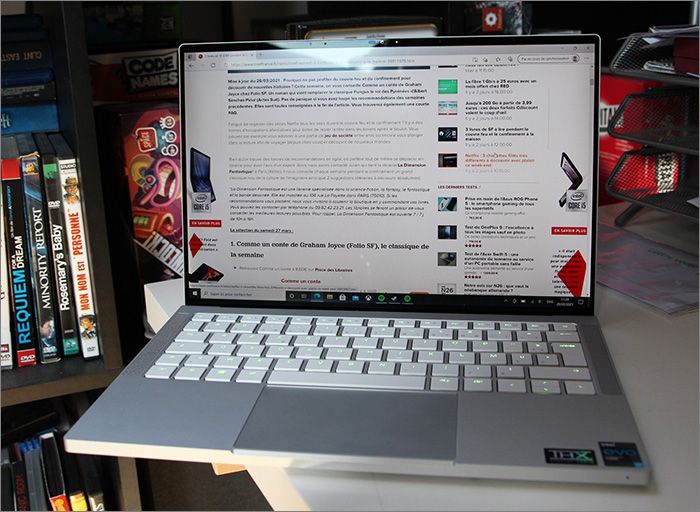 Razer uses its RGB know-how and offers the possibility of completely customizing the lighting of the keyboard, via its Razer Synapse software. You can also configure macros (shortcuts), remap certain keys, or use the very practical Hypershift, which allows you to associate the shift key with another to create a shortcut.

Small nice detail: when you press the FN key, all the keyboard keys go out, except those going from F1 to F12, where you find the shortcuts related to FN. Too bad, however, not to have backlit these feature icons. In the middle of the night, difficult to know if you press to increase or decrease the volume.

Still looking fabulous, now is the time to address the big highlight of this Razer Book 13: its 13.4-inch 100% sRGB touch screen. Surrounded by a very thin border (the thinnest in the world according to Razer for a screen of this size), it is a brilliant panel, with more pronounced colors than on a matt screen, which also benefits from a treatment. anti reflection. 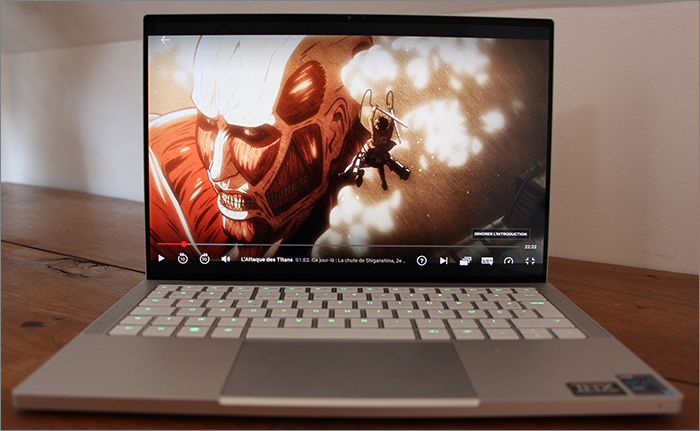 An anti-reflective treatment that almost allows use even outdoors. The choice to equip it with a full HD + resolution (1920/1200) is still a good calculation, since in office automation, reading articles or documents, the space gained in height is a real pleasure.

Above this 16/10 panel, you will find an HD webcam, of course welcome for a working PC in times of Covid. It also allows you to use the Hello facial recognition function to connect. Note that this one sometimes has some difficulties at night and with spectacle wearers. Fortunately, the Hello menu allows you to register your face without glasses as well.

Connectivity is light, even for a business PC. You’ll find two Thunderbolt 4s, one on each side, which is handy to fit and charge the PC in any situation. On the left, it has a USB C input, and a 3.5mm jack port. On the right, an HDMI 2.0 port and a microSD slot, well seen for a professional PC, complete the whole. The Razer Book 13 is also equipped with Wi-Fi 6 and bluetooth 5.1.

In order to test its autonomy, as we are used to at France, we unplugged the PC and launched the Casa de Papel series on Netflix, via the Edge browser. The settings are always the same: connected to Wifi, 50% brightness, 40% for sound. Verdict: The Razer Book shut down after almost 15 episodes, or 11 hours and 18 minutes. A good score which places him 6th in our ranking, just behind the 13 hours of the Asus ZenBook 14 and the 14 hours of the 2021 Dell XPS 13, but still far from the champion Acer Swift 5 who had blithely exceeded the 15 hours.

Another good point brought to its portability, its 65 W charger is extremely small and light, as can be seen in the photo above. Unfortunately, we found that if we plug the charger in a certain way, it tends to not plug in properly and not charge the PC. It will therefore be necessary to be extra vigilant when plugging it in. 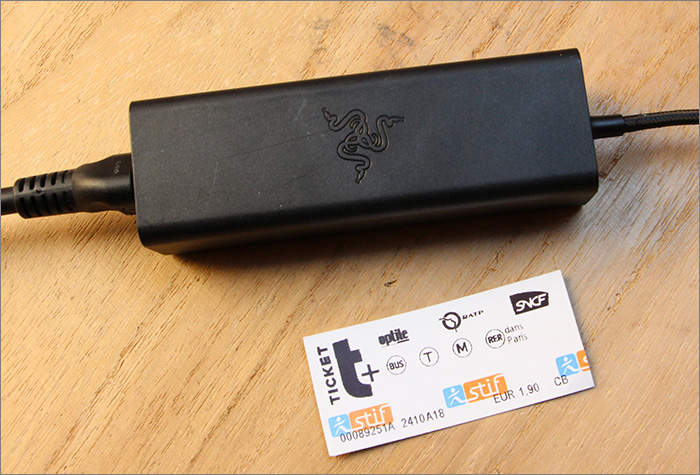 It must be possible, thanks to Razer Synapse, to scavenge for a few more minutes, since the software installed in the Razer offers the possibility of creating usage profiles. For example, it is possible to ask the keypad lighting to switch off automatically under a given battery level. Let’s take this opportunity to salute the virtual absence of third-party software installed automatically on this Razer, apart from Synapse. 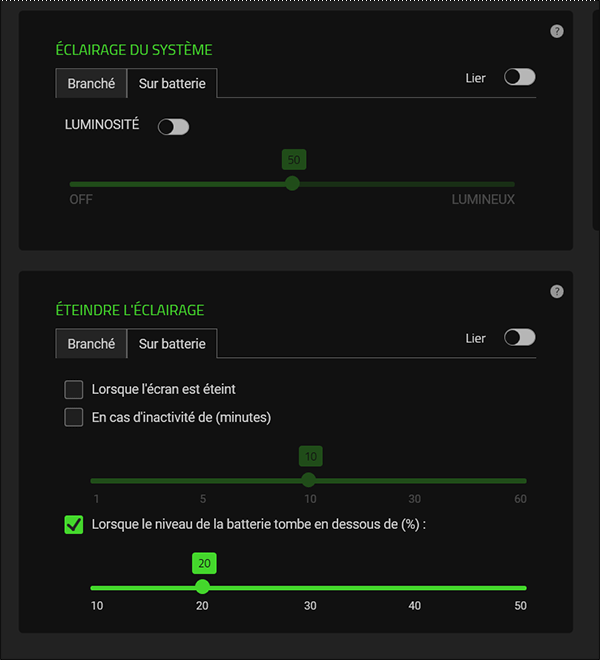 In terms of performance, the Razer Book 13 is a little below our expectations for such a price range. If it weren’t for comparing it with its little comrades, it would be almost above average according to our benchmarks. But the idea of ​​having a PC that grabs a few points in a benchmark will not necessarily be worth the additional cost. Still, it almost blew us away in the game, like most PCs that benefit from the Intel Iris Xe Graphics processor. The latter often allows them to run a good part of our game library of games that are not too demanding, which is a plus for a PC, even geared towards productivity.

Its Intel Core i7 1165G7 processor raises the bar with a very good score of 2244 on Novabench, slightly ahead of the Ryzen 9 4900HS of the Rog Zephyrus, which obtained 2144 according to our test. Then tested on Geekbench, it obtained a score of 1567 in single-core, 5426 in multi-core and its integrated graphics processor, the Intel Iris Xe Graphics, posted 19272. It therefore surpasses the Acer Swift processor by a few points. 5 that we tested, which nevertheless uses the same model. 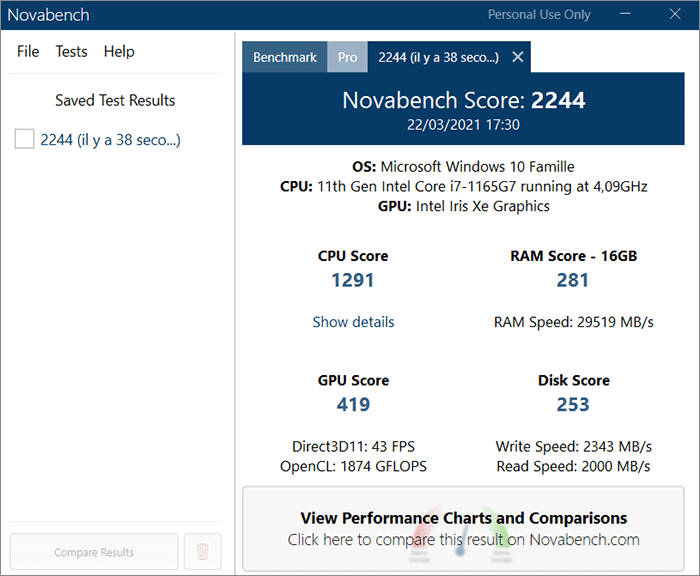 With such scores, the urge to launch a few games on this PC comes naturally. A window offering a free month of subscription to Xbox Game Pass invites us to do so. Especially since the Acer Swift 5, equipped with the same processor, had shown itself to be very skilled at launching low-consumption games.

However, you should not have eyes bigger than your stomach to choose the titles you want to launch on this Razer Book 13. Certainly, for low-poly games (with few textures) like Fall Guys, or Risk of Rain 2, it is able to make them run at 60 Frames per second (IPS) without difficulty, which remains a prowess to salute for a simple graphics processor. But as soon as you go upmarket slightly, with a Valheim for example, even lowering all the graphics, it remains difficult. With a resolution of 720 pixels, it will still run between 40 and 50 IPS. 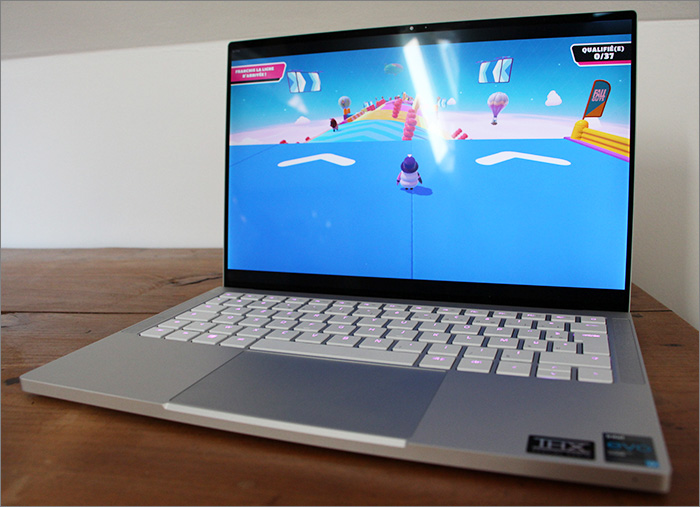 Note that apart from gaming, which is not the main activity targeted by this PC, the Razer Book 13 runs like clockwork, even with four or five applications launched at the same time. It also benefits from EVO certification, which allows it to go from standby to active use from one second to the next.

The viewing of series and the games allowed us to get an idea of ​​the sound of this Razer Book 13. The result is far from being scandalous for this type of product. We didn’t notice any sizzling, even when pushing it all the way, and the overall rendering is quite pleasant. However, as is often the case with ultra-notebooks, the speakers of the Razer Book 13 come out with little or no treble.

For less, we can be tempted by the Acer Swift 5, which does not have such a beautiful screen, but which competes in terms of performance with this Razer Book 13, and which has greater autonomy. Another model to consider in 13 inches, the Dell XPS 13 2021, very powerful and also more autonomous.

The Razer Book 13 is therefore an ultrabook with high-end performance, which flatters the eye and has an extremely pleasant screen. Unfortunately, with a little light connectivity and a very small SSD, it struggles to justify its price, much higher than some competitors. A mixed first test for the manufacturer, but which will probably convince fans of the brand.