We tested Realme’s first foray into the Android tablet market, here are our impressions.

There isn’t much to fault Realme in terms of design and build. We must admit that the Chinese manufacturer is making a strong start in this field by offering us a truly stylish and well-built tablet, with aluminum frame and glass front. Very classic in its construction, the Realme Pad owns the canons of 2021 in terms of design, with a rectilinear tablet, with flat edges, rounded angles and refined edges.

The impression of quality and solidity is excellent for this first draft of Realme in the Android slate market … and yet its Pad is a very fine featherweight (440 grams by 6.9 mm). The Look of the Realme Pad also has the advantage of being significantly more modern than the one maintained by its main competitor: the iPad 9 2021, whose aesthetics are unfortunately very outdated.

As for the handling, there is nothing to reproach Realme either, at least with one detail. Narrow in the upright position, the Realme Pad is easily held in one hand. A double-edged feature: because if it helps grip, it’s quite frustrating when used in landscape format, especially for multitasking. On this side, we will therefore clearly prefer the more square and less rectangular silhouette of the iPad. 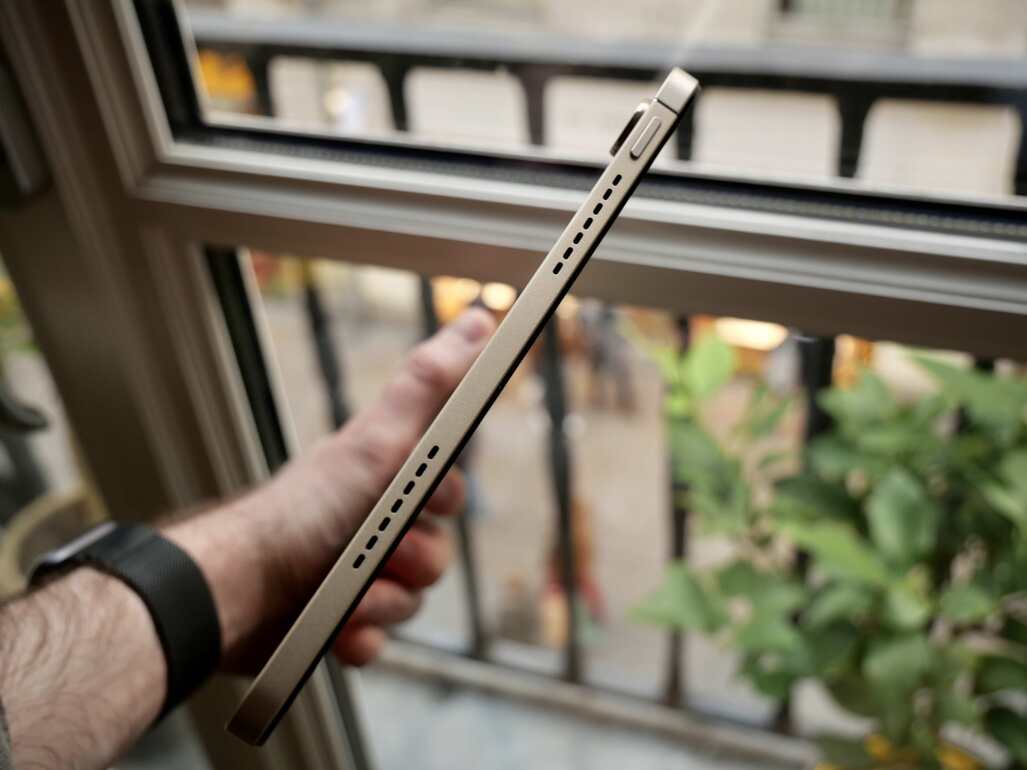 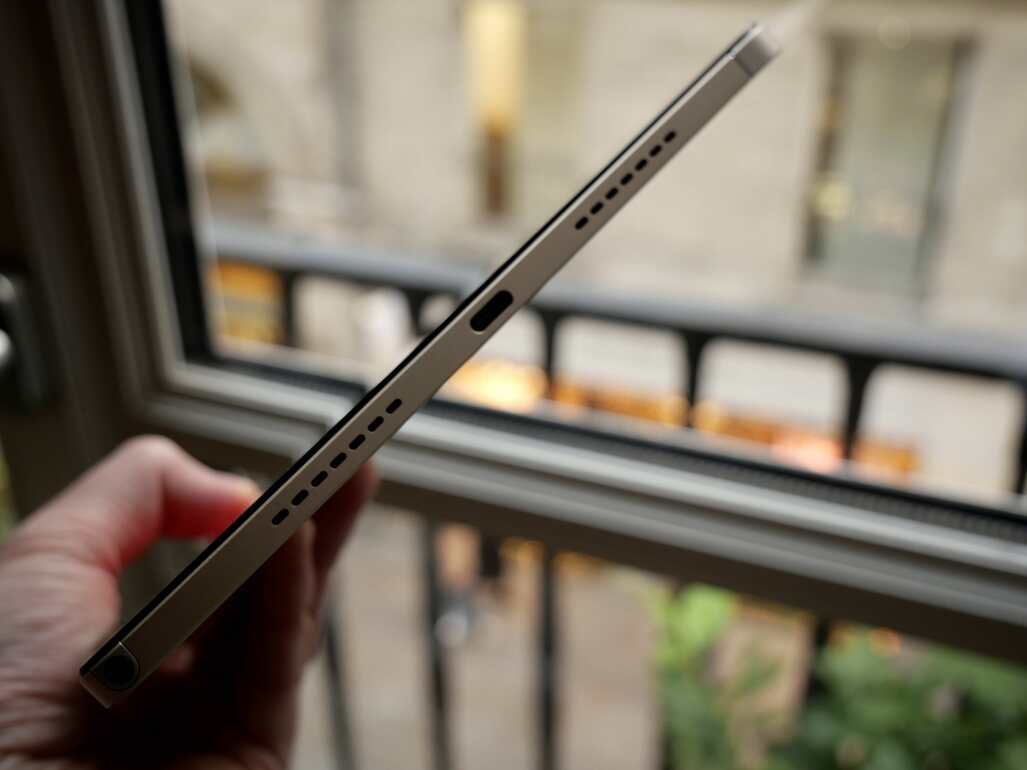 In terms of connectivity, the Realme tablet also makes a good impression with its USB-C port and 3.5mm headphone jack (disappearing in more high-end tablets). A microSD card reader is also present on the right edge, in a hatch that can also accommodate a SIM card. If you want, you can stay permanently connected to the Realme Pad through 4G connectivity. 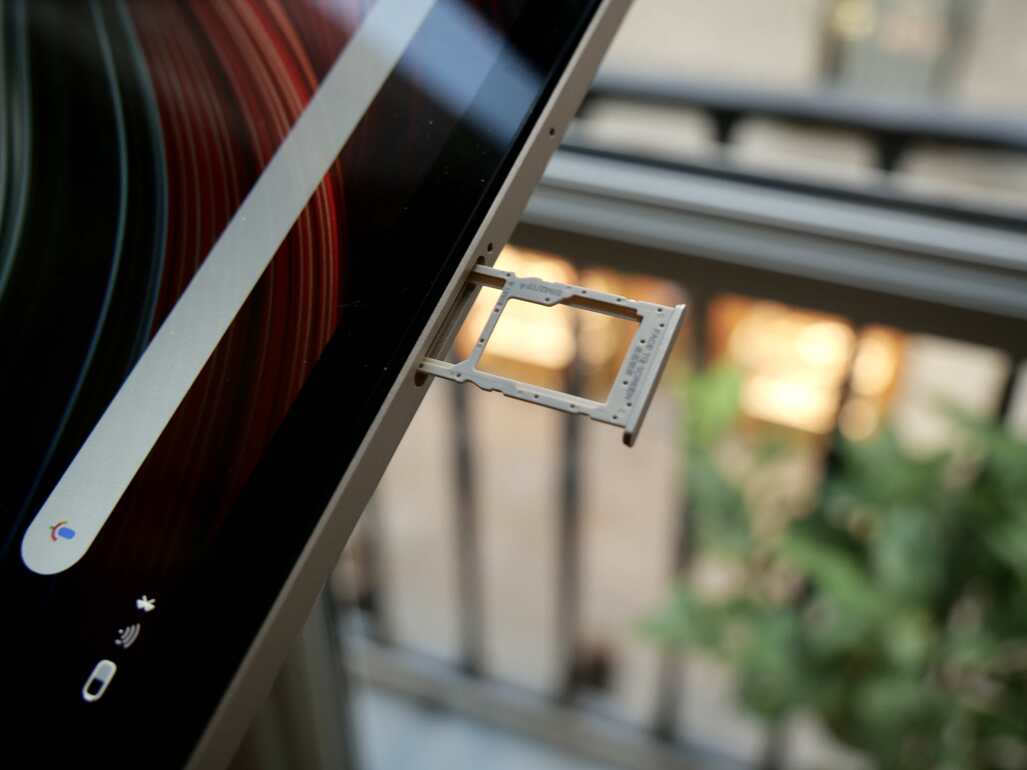 The Realme Pad is equipped for the rest of four quality honest speakers although very focused on mediums (you can forget the serious ones, there are none), and on a facial recognition system whose actions are very uncertain. We quickly regret the absence of a fingerprint sensor to compensate for its whims … but just over 250 euros, we can’t have it all. 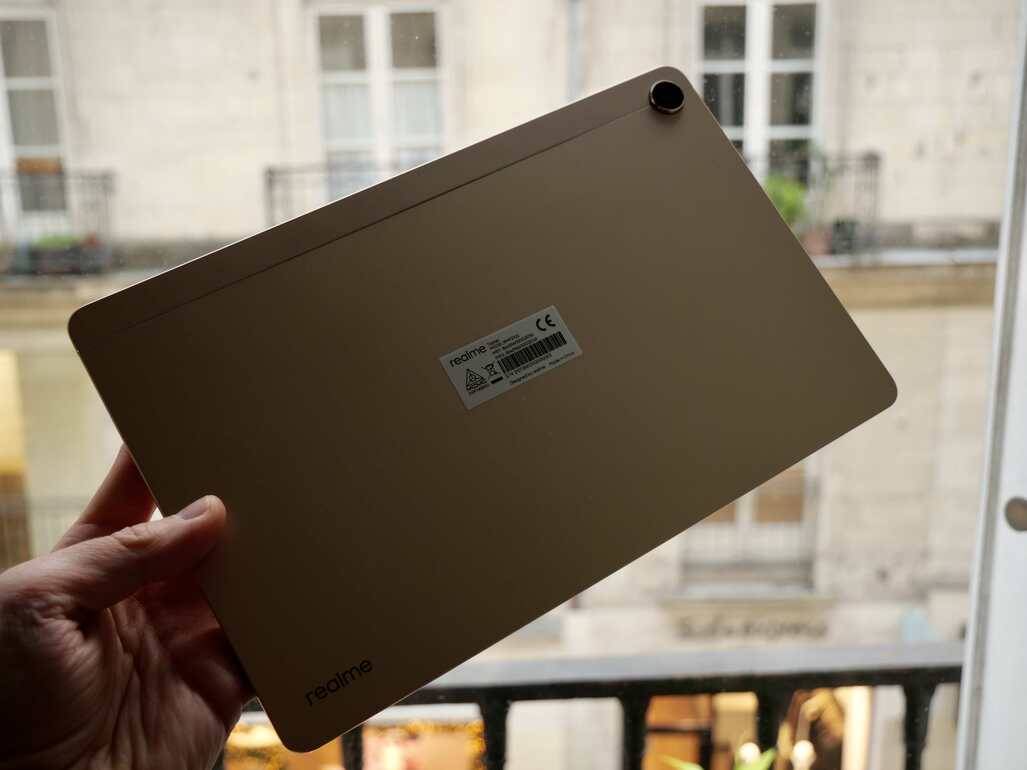 Side of the software that Realme offers us a virtual Android 11 experienceand thus pure sugar … without a significant addition by the manufacturer despite the use of the Realme UI overlay. A good thing, especially since, unlike Huawei here, we take advantage of all of Google’s apps and services.

This subtitle sadly summarizes the experience provided by 10.4-inch 2K LCD panel (2000 x 1200 pixels) added to Realme Pad. On paper, the latter is quality for an entry-level tablet.. The fineness of the screen is also very satisfactory, for this price range, and the brightness (measured by us at 390 cd / m2 at maximum value) is also convincing for everyday use. 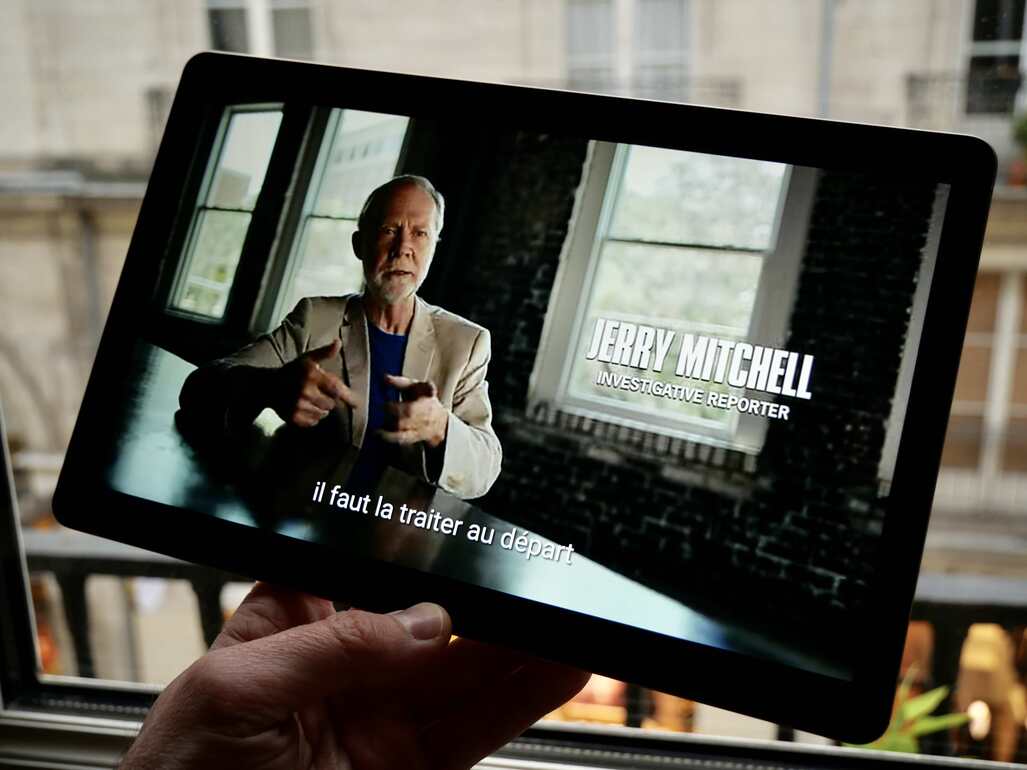 So you won’t be enjoying your content in the best image quality that’s for sure, but the Realme tablet still makes up for it with 98.3% coverage of the sRGB spectrum (compared to 74.7% of the DCI-P3 range) and an honest, esteemed contrast. with our tools in 1439: 1. Correct values ​​considering the price of the device.

Slow, but sufficient in absolute terms, at least for specific family use. This is what we can say about the performance of the Realme Pad. MediaTek’s Helio G80 (an entry-level SoC released about two years ago) is in command, along with 4GB of RAM in our test copy (a 6GB model exists). This 12nm engraved ARM chip includes a total of 8 CPU cores (two Cortex-A75 cores at 2 GHz / six Cortex-A55 cores at 1.8 GHz) and a Mali-G52 MC2 graphics part. 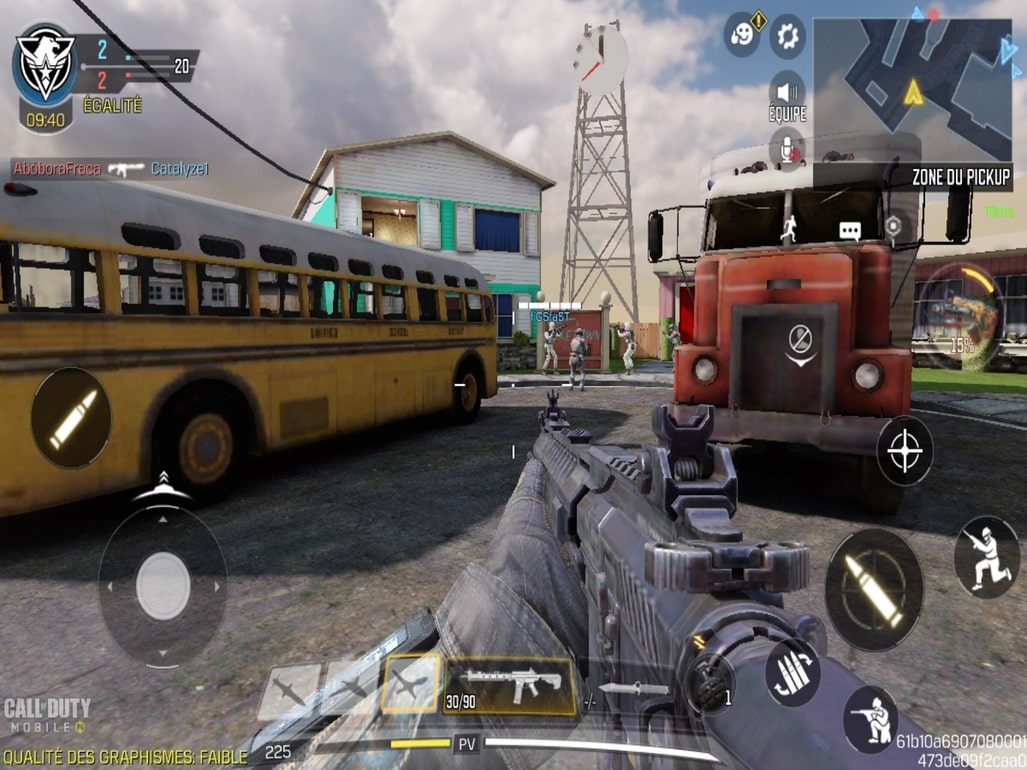 All these beautiful people are much slower than the A13 Bionic chip in the iPad 9, the benchmarks are not deceiving, but it was expected. So the little MediaTek chip doesn’t do wonders for gourmet activities and quickly shows its limits in the game in somewhat demanding 3D titles. Call of Duty Mobile, for example, is released with a truly minimalist graphic quality… but nevertheless remains fluid most of the time. 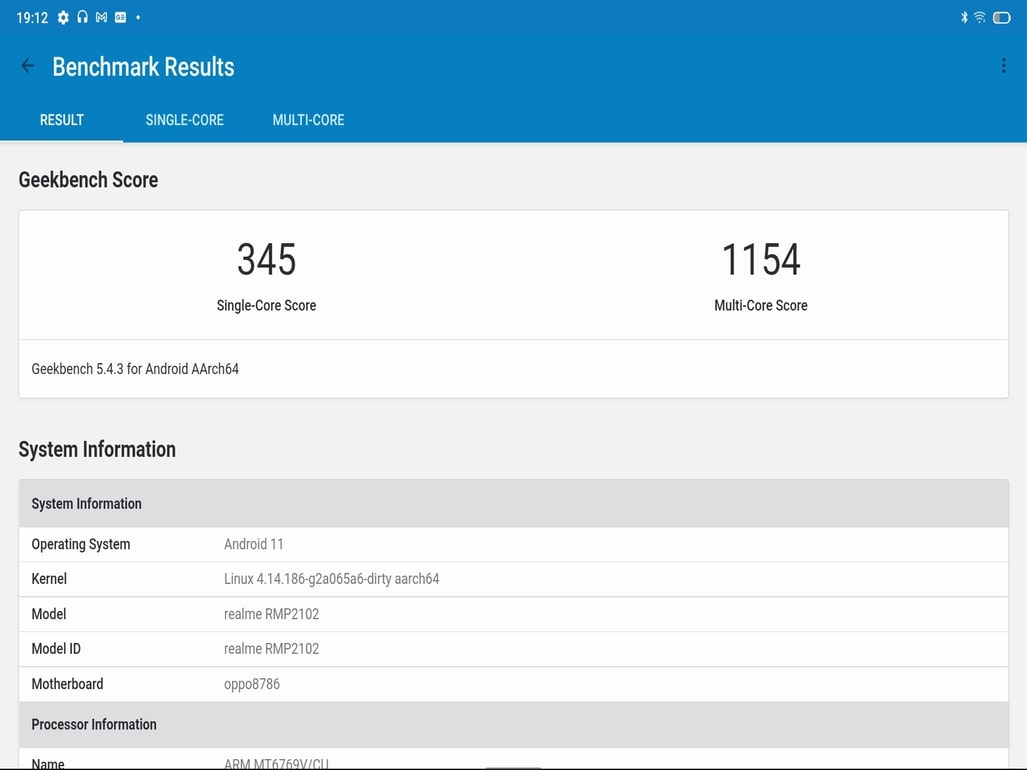 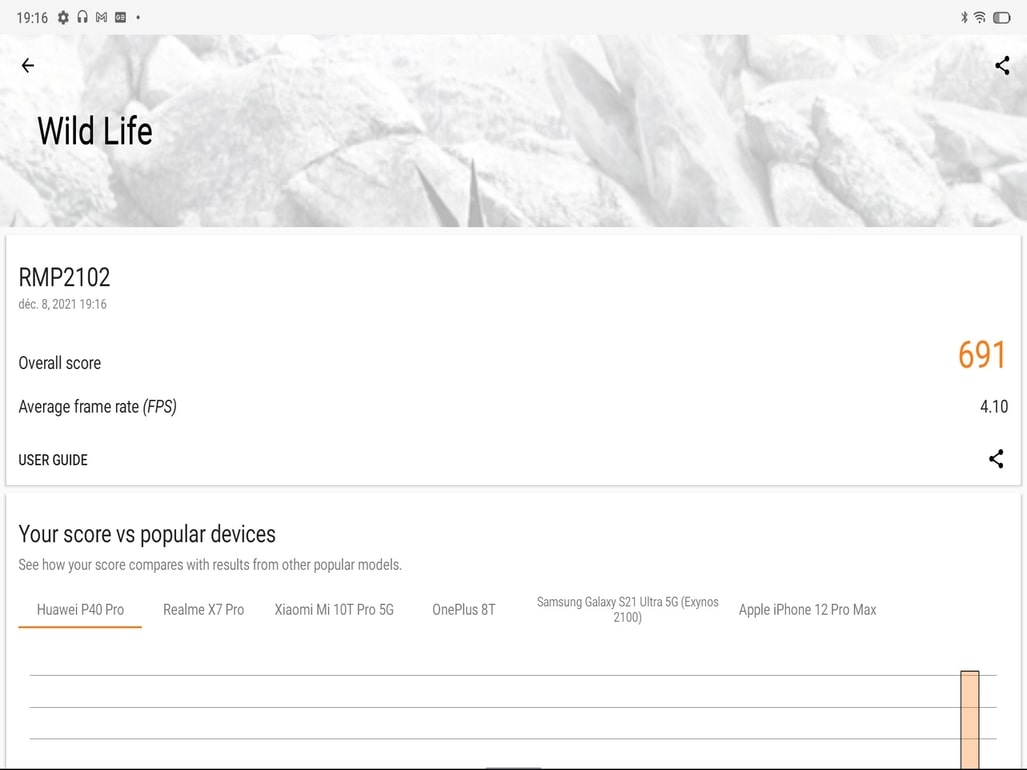 Daily, the Realme Pad remains powerful enough for basic tasks, even if we still notice some occasional interface slowdowns.

The full day of autonomy, no problem

With its 7100 mAh battery, the Realme slate manages to sustain between 10 and 12 hours in multipurpose use. An honest score, but slightly lower than that also offered by the iPad 9, whose chip, engraved at 7 nm, is significantly more energy efficient. 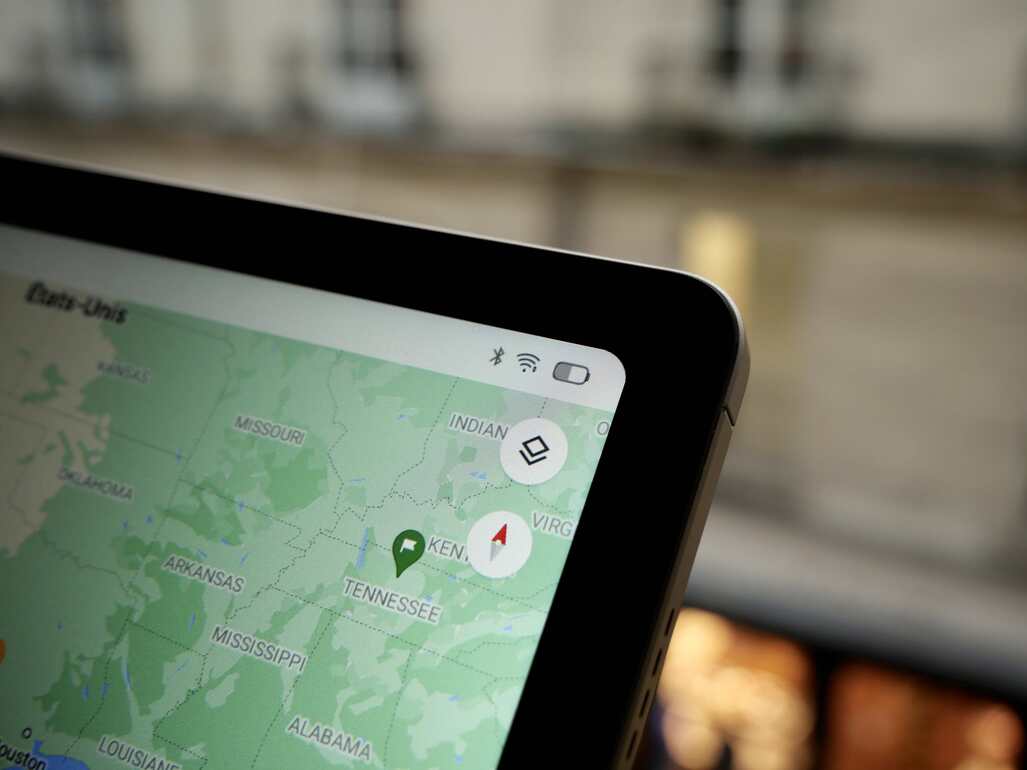 The supplied 18W charger allows you to recover 100% of the battery in approximately 2 hours 45 into an AC outlet. Needless to say, we’ve already seen faster.

The photo, especially in problem solving.

On the presentation page of its tablet, Realme makes no explicit mention of the rear photo sensor. This is not surprising: the latter does not perform any better than the photo modules installed five years ago in entry-level smartphones. In the middle of the day, in good light conditions, it is just fine. Unfortunately, images taken at night or in low light are not very detailed and software processing never manages to save furniture. In other words, don’t expect much from this main module. However, it can be useful for scanning documents if necessary. 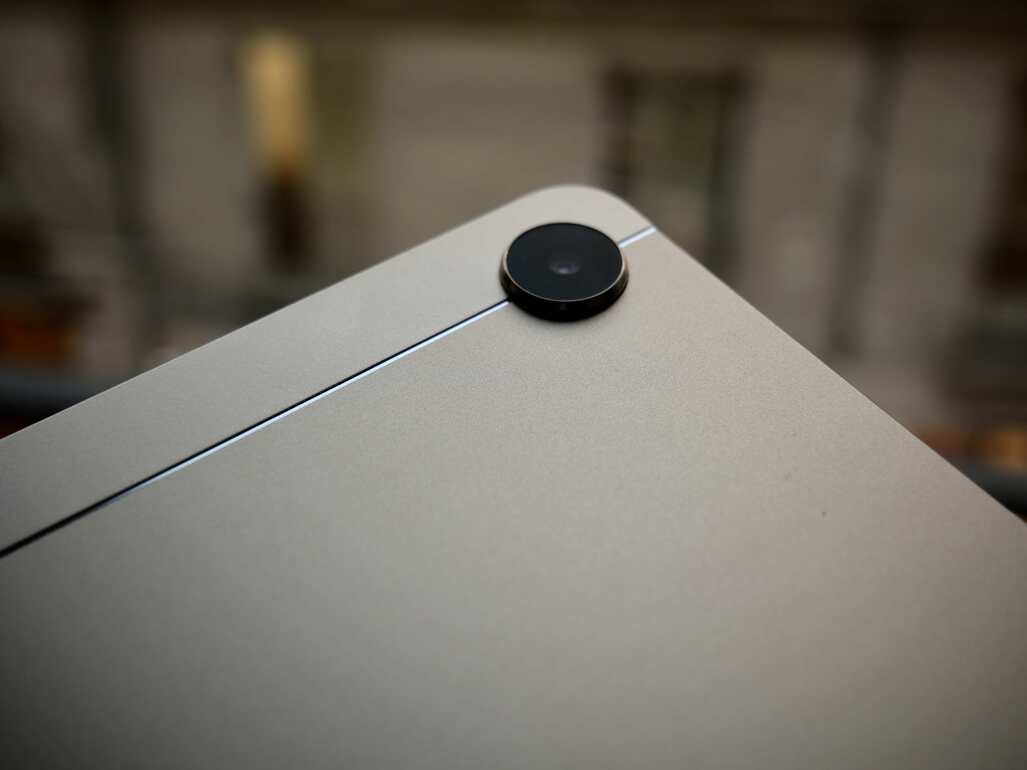 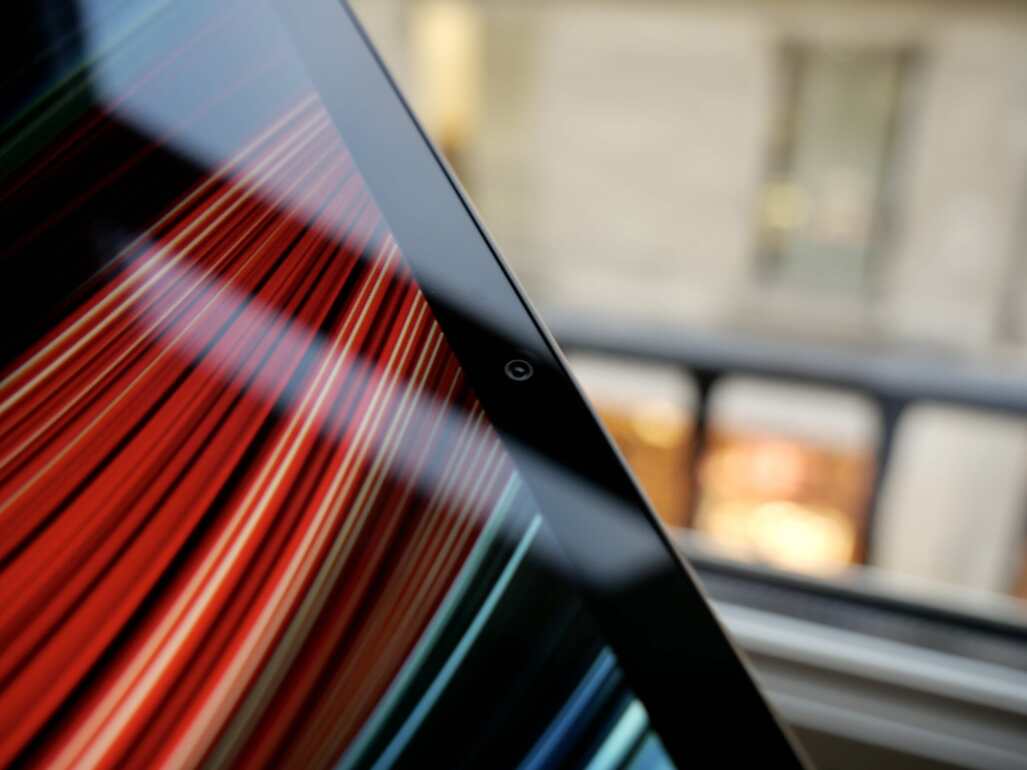 The 8 Mpx front sensor allows as far as it is concerned correct video exchangesespecially when lighting conditions are good. Take advantage of a wide angle lens that rises to 105 degrees. Convenient for multi-party video calls, even if we see edges distorted by this wide angle to the image. 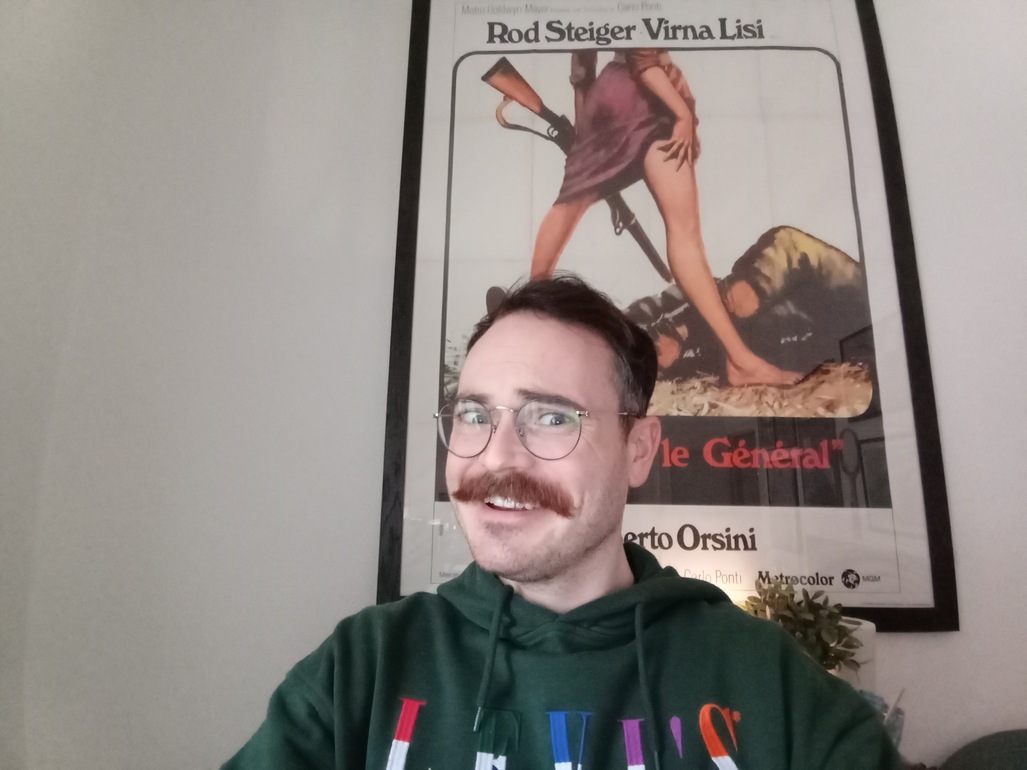 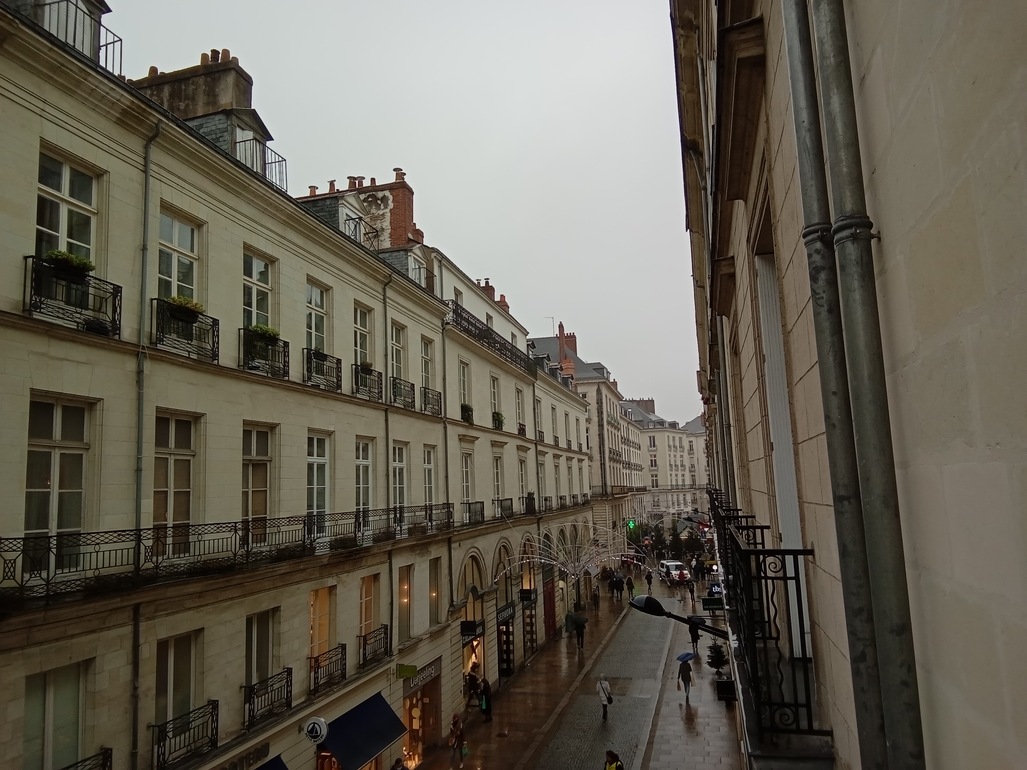 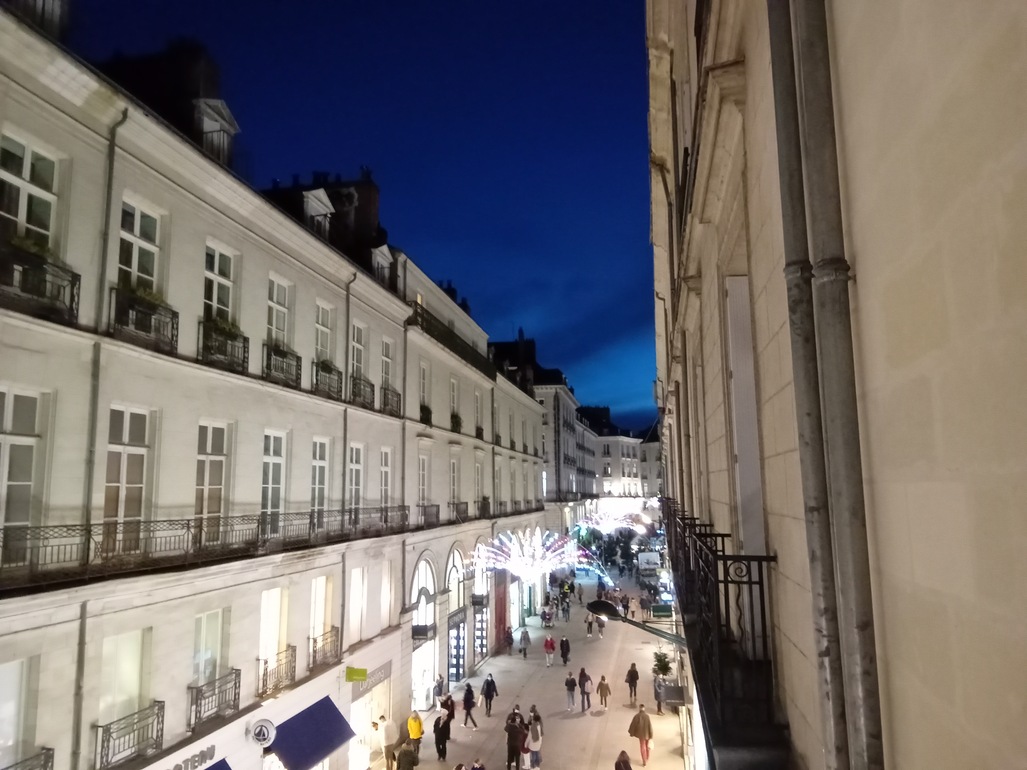 The Realme Pad against the competition:

With a starting price set at 259.99 euros on the official website of its manufacturer, the Realme Pad has for it an aggressive pricing. Its high-end version (6 GB of RAM / 128 GB of storage) does not exceed the limit of 280 euros.

In front of him, the Apple iPad 9 2021 starts at 389 euros in the 64 GB version Another competitor: the Xiaomi Pad 5, which offers a much more high-end experience for a price that ranges between 350 and 400 euros depending on the epoch and resellers. 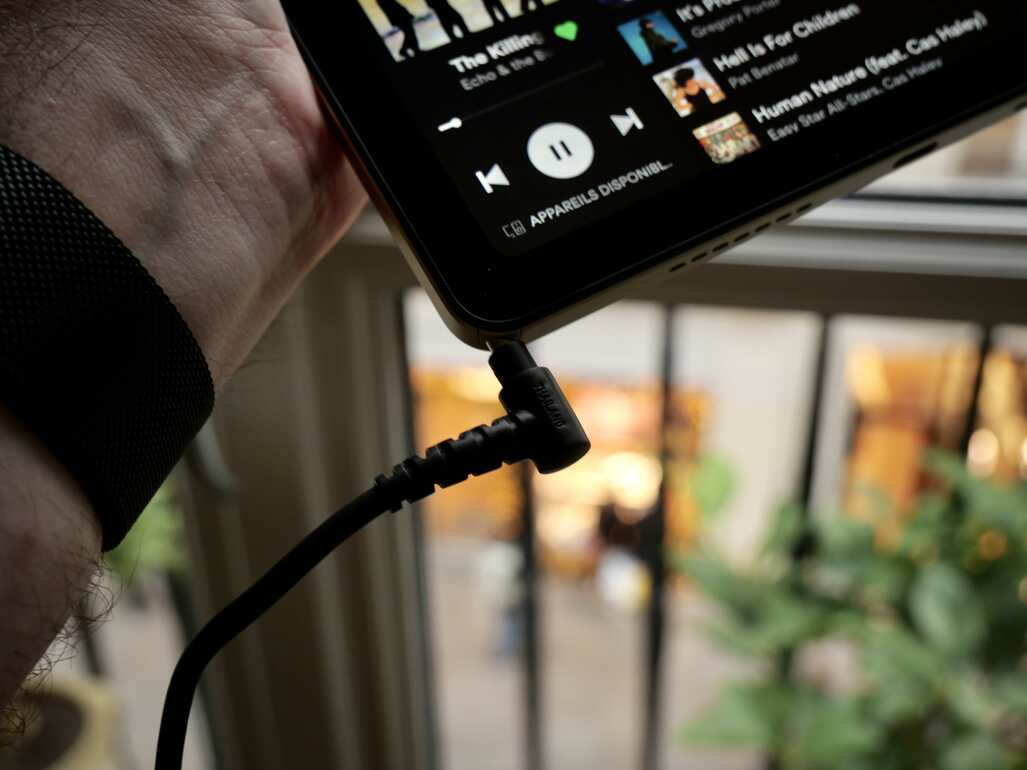 The Realme Pad has two great advantages: its price and its design. Slate can have a modern and luxurious look to seduce, but also with an attractive price, well below 300 euros, whatever the chosen version. Allowing for a judicious positioning of the first Realme tablet on the market. However, to achieve this price level, the Chinese manufacturer has made some concessions. In our opinion, the most important thing is to look for the performance, correct but limited, even slow. At the same time, we regret that Realme did not address the issue of visualization further. As is, the Full HD + panel on your Pad is adequate because it is poorly calibrated.