First of all, it should be noted that the study that we suggest you discover today risks causing more than one to react and that it is important to emphasize that the level of seriousness of it remains relatively difficult to determine. Indeed, a group of psychologists worked in collaboration with Royal Panda, to conduct a study on a panel of 1001 players to determine which players, depending on the platform they use, were the smartest. Thus, the specialists revealed the results of their study and present to us whether those who play on PlayStation, Xbox, Nintendo, PC or mobile have a higher IQ.

If you play on PlayStation, you are smarter than those on Xbox

To do this, the study authors asked participants to complete a questionnaire in which they specified the machine on which they were playing. Then the panel participated in an IQ test on four types of intelligences namely: verbal intelligence, mathematical abilities, visual reasoning and logical reasoning.

By compiling the results obtained and classifying them according to the console, psychologists were therefore able to determine the average IQ of players compared to the platform they use to play video games. Thus, according to this study, PC gamers are the smartest with an average IQ of 112.3 followed by PlayStation 4 gamers with 110.7 IQ and Xbox enthusiasts are in 3rd place with 103.8 IQ. The leaderboard ends with Nintendo Switch gamers with 101.3 IQ and mobile gamers bring up the rear with 99.4 IQ.

Looking in detail at the results obtained, we can note that the PC is in second position for logical and visual reasoning and that on these two criteria it is the PS4 which takes the first place. However, for verbal intelligence and mathematical skills, it is the PC that comes first. Regarding Xbox, it is in third place in each section.

The study did not only analyze the intelligence of the players according to the consoles. She also focused on video games to find out what people with the highest IQ are playing.. Thus, the five games that occupy the top of the ranking are Rainbow Six Siege (120.3), Among Us (118.9), Minecraft (116.3), Call of Duty: Modern Warfare (111.2) and FIFA (106.5). Candy Crush Saga and angry Birds are the two titles which close the classification with 96.4 and 95.8 of IQ respectively. 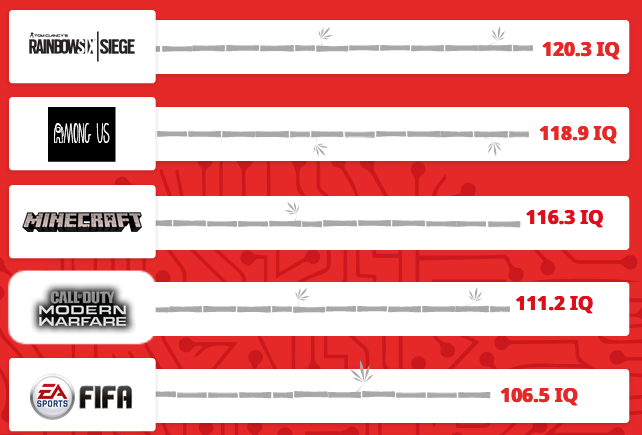 These results are likely to ignite even more the war between the pro PlayStation, the pro Xbox and the PC players, but we remind you, the study does not specify the exact procedure used to determine these results. It would have been interesting to have the IQ questionnaires which were distributed to obtain the measurements and also to see if the members of the panel do not have two consoles for example … In short, a funny study which, in any case, does not damages your intelligence. If you want to see all the results in detail, this is where it’s happening!

The Actors Behind “Max Payne” Celebrate The Game’s 20th Anniversary

PlayStation 5 India restocking on July 26: how and where to reserve your PS5 unit

You can play your PS4, PS5, Switch or Xbox Series at the cinema

The Actors Behind “Max Payne” Celebrate The Game’s 20th Anniversary

PlayStation 5 India restocking on July 26: how and where to reserve your PS5 unit

You can play your PS4, PS5, Switch or Xbox Series at the cinema