In the first ten months of 2021, the paid video on demand market grew by 10.7% compared to the same period in 2020, reaching 1,420 million euros in turnover. The three segments that make up the paid streaming market are experiencing contrasting developments: the SVOD market continues to grow, registering a growth of 17.6% to 1.25 billion euros, which should project it more. € 1.5 billion of revenue by the end of 2021.

The EST (final purchase) market posted a weaker performance with a 24.6% drop during the period. Assuming an annual contraction of around 23%, the EST market could see its revenues fall below 80 million euros by the end of 2021.

Finally, the rental market, which saw its sales rebound in October with the return of new products, since from one year to the next the drop in sales was 19.3% while in the previous months the drop was higher than twenty%. The situation for TVOD should continue to improve in November and December with long-awaited programming, both with American films (Fast & Furious 9, Black Widow, Old, Jungle Cruise) and French (Kaamelott, OSS 117, Bac Nord, Benedetta). Under these conditions, we can estimate that the TVOD market could show a decline of only 15% compared to 2020, for a business volume of 142 million euros. 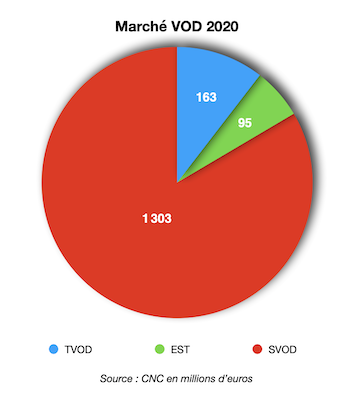 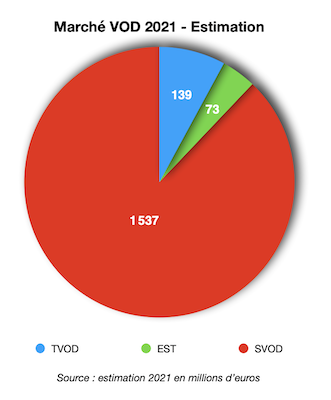