It’s a rare find: an oviraptorosaur embryo, a clade of bipedal theropod dinosaurs, located in its fossilized egg, dating from 72 to 66 million years ago. Its state of conservation is such that it provides new information on the development of these now extinct species. In particular, this incredibly well-preserved egg reveals that the evolutionary links between dinosaurs and modern birds are actually much deeper than scholars believed.

Oviraptorosaurs are a group of feathered theropod dinosaurs, closely related to modern birds, that settled in Asia and North America 125 million years ago. The egg was discovered in southern China, in the Upper Cretaceous Hekou Formation. This fossil suggests that as they approached hatching, these theropod dinosaurs developed postures similar to those of birds. The resemblance to modern bird embryos is truly striking: the embryo is rolled up on itself, the back against the shell, the head under the body, the legs flexed on each side.

In modern birds, these postures are related to folding, a behavior controlled by the central nervous system, which ensures successful hatching. However, this posture has never been observed in a non-avian dinosaur until now. “This little prenatal dinosaur looks like a young bird curled up in its egg, proving once again that many characteristics of modern birds first evolved into their dinosaur ancestors,” said Stephen Brusatte, paleontologist at the University of Edinburgh and co-author of the study presenting the discovery.

A posture very similar to that of chicken embryos.

In fact, this egg had been kept at the Yingliang Stone Natural History Museum in Xiamen, southeast China, since 2010. It was through the selection of various acquisitions that the museum staff made this incredible discovery. This jointed specimen is one of the most complete non-avian dinosaur embryos ever discovered. For paleontologists, this is the opportunity to conduct a detailed anatomical study, which will answer many questions about the growth and reproduction of dinosaurs.

The embryo, nicknamed “Baby Yingliang”, was identified as an oviraptorosaur by the combination of several typical characters, including a rather short skull with a beak and lack of dentition. The skeleton is nearly complete, “without many apparent postmortem alterations,” the researchers note. The egg is 16.7 cm long by 7.6 cm wide. The skeleton measures approximately 23.5 cm in total length – from the anterior point of the skull to the last preserved caudal vertebra – and therefore occupies almost the entire space of the egg, except for an area of ​​approximately 2 cm located between the back. of the animal. and the shell, which presumably makes up the air cell, a space typically found between the back of the embryo and the blunt pole of bird eggs.

The posture taken by the oviraptorosaur embryo has several similarities to chicken embryos, suggesting that this typical behavior of modern birds could be inherited from non-avian dinosaurs. © L. Xing et al.

The posture adopted by this specimen differs from that of the sauropodomorphs – a suborder of dinosaurs, “cousins” of the theropods, characterized by a long neck – and existing crocodiles, but on the other hand it is very similar to that of chicken embryos. , a few days before the outbreak. So after examining the egg and embryo, the researchers believe that such pre-hatching behavior, previously thought to be unique to birds, may ultimately have come from these non-avian dinosaurs millions of years ago.

Oviraptorosaurs (meaning “egg-stealing lizards”) were so named because the earliest fossils of this clade, found near a nest, suggested that they fed on eggs. Studies eventually showed that it was actually the animal’s own nest. The eating habits of these animals are not fully known. However, their highly variable beak shapes and body sizes have likely allowed them to adopt a wide range of diets, both herbivorous and carnivorous. Oviraptorosaurs became extinct at the end of the Cretaceous, about 66 million years ago, like all other non-avian dinosaurs.

The discovery of this embryo reinforces the hypothesis that several typical characteristics of birds are actually inherited from theropod dinosaurs. For example, several dinosaur fossils have been discovered in their nests, hatching eggs. In the early 2000s, researchers also reported the discovery of a fossil of a troodontid, another family of theropods, preserved in the stereotypical sleep or rest posture seen in birds. 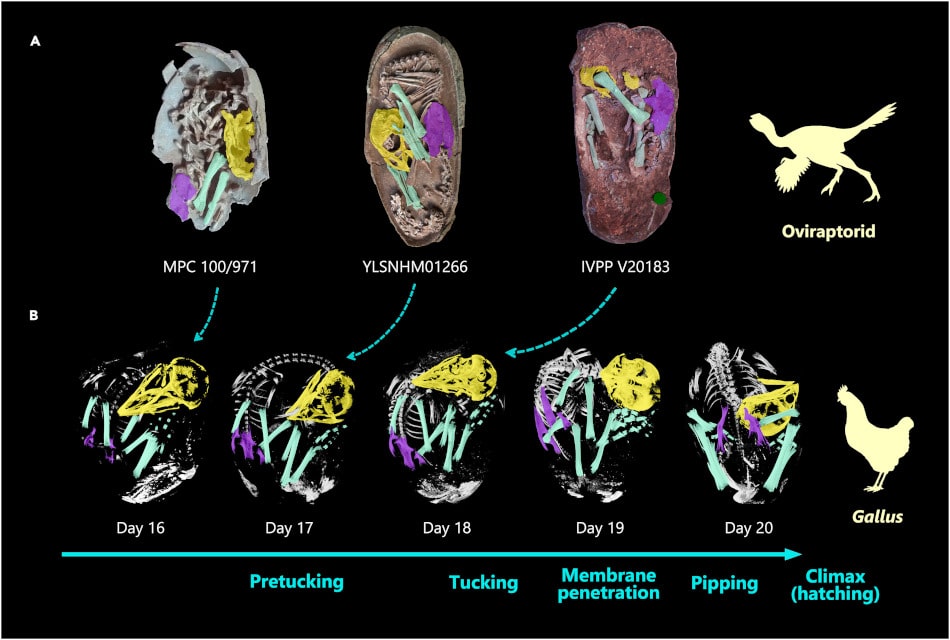 The differences in posture observed between three oviraptorosaur embryos could correspond to different stages of incubation. © L. Xing et al.

The team also compared the new embryo with two other previously discovered oviraptorosaur eggs, one in Ganzhou, southeast China, the other in Mongolia, of similar size. Although quite similar, the postures adopted by these other two embryos differed slightly, in particular in the position of the skull, which appeared more or less close to the ilium; likewise, the hind legs of the animal were more or less associated. These differences may represent varying degrees of curvature or “intervals of postural changes during incubation,” the researchers write, postural changes observed in birds.

The team emphasizes that, however, the study of other fossilized embryos is necessary to confirm this hypothesis. Additional fossil embryos, not only of theropod dinosaurs, but also of sauropodomorphs and ornithischians, much further removed from birds, as well as deeper comparative studies of existing archosaurs, especially crocodiles, will be carried out to better understand the behavior of the prehistoric. hatching non-avian dinosaurs.

3D animated reconstruction of the embryo: